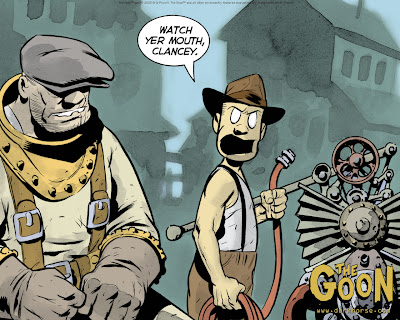 ---the Mad Men women speak and Natasha Vargas-Cooper discusses Mad Men Unbuttoned: A Romp through 1960s America
---Rambo, First Blood Part II, The Musical
---The Goon!
---Rob Walker's "When Funny Goes Viral":
"Hwang concedes the metajoke aspect of that first conference in 2008: wouldn’t it be funny and weird to create an event about things on the Internet that are funny and weird? The punch line is that their idea was prescient. Moot, the 4Chan.org founder, who has since revealed his name as Christopher Poole, recently gave a talk at a TED Conference, a gathering of tech and business insiders. There, he explained the origins of Internet foolishness like Lolcats and Rickrolling to its well-heeled, big-thinking audience. Hwang spoke at this year’s South by Southwest Music and Media Conference on the subject of “homemade-flamethrower videos” on YouTube. The department of media, culture and communication at New York University brought in a trio of performers for the main event at its undergraduate conference this winter to give a presentation called MemeFactory, a fast-paced talk with three slide projectors running simultaneously, addressing practically every stupid joke — or Internet meme, to use the common catch-all term — that’s ricocheted across the Web in the past 10 years.

Like practically everything else, people fooling around is transformed by the online context. Consider Rickrolling. As many (but probably not all) of you know, this involves suggesting that a point being made online will be backed up, or refuted, if you click on what appears to be a relevant link; instead, the link takes you to a video for Rick Astley’s 1987 hit, “Never Gonna Give You Up.” This prank became such a fad that it was referenced in the 2008 Macy’s Thanksgiving Day Parade, with Astley himself on hand to live-Rickroll the audience. Or consider Lolcats (LOL meaning “laugh out loud”), which even the most casual Internet user has probably come across: funny pictures of cats, made funnier by a pidgin-English phrase in big block letters, joined in what’s referred to as “image macro.” The Mona Lisa (or maybe the Duchamp “Fountain”) of Lolcats shows a chubby feline with a plaintive expression, asking, “I can has cheezburger?” A Seattle entrepreneur named Ben Huh, who now owns icanhascheezburger.com, has made Lolcats the cornerstone of a multimillion-dollar business, producing several books and a slew of similar sites. Not coincidentally, mainstream publishers have paid six-figure advances to total unknowns in hopes of converting ROFL to revenue; CBS is turning some guy’s crude-humor Twitter feed into a sitcom.

So, yes, young people have been messing around forever. But the results have seldom ended up attracting deals with major media companies, sparking discussions at confabs like TED or been included alongside Kermit and Santa Claus in a literal parade of broadly recognizable iconography."

---Peter Travers interviews a cheerful Joseph Gordon-Levitt. Moreover, David Hudson links to everything related to Inception, and Catherine Grant shares everything scholarly on Christopher Nolan.
---Kenneth Hagin goes wild (thanks to @GreatDismal)
---Bill Murray's GQ interview
---Twitter and the Oakland riots
---Henry Jenkins interviews Chuck Tryon about the effects of the web on film criticism:
"Much has been written about the fact that there is no longer a Pauline Kael among film critics. Instead, our most well known critic today is Roger Ebert, who has moved from television to the blogs and Twitter as platforms for sharing his views on film. Behind Ebert, there is an army of film bloggers who are sharing their thoughts about cinema. Is the result a stronger or weaker film culture? What do you see as the strengths and limitations of these two configurations of film criticism?

To some extent, I think it's easy to romanticize the past and the contributions of critics such as Pauline Kael, Andrew Sarris, and Susan Sontag, especially when so many newspapers and magazines are either firing their film critics or relying upon freelance writers for their reviews. But this nostalgia for an earlier form of film criticism obscures some of the ways in which film blogs are helping to reinvent film culture.Because of my own experiences as a film blogger, I'm probably biased on this point, but I think that film blogs have strengthened film culture immensely, in part because those critics are now held accountable by the bloggers who read and respond to their reviews in highly public ways. But although there may be thousands of dedicated film bloggers, I think the blogosphere is structured in such a way that a small number of critics still wield a huge influence, such as Roger Ebert, A.O. Scott, and Harry Knowles. Similarly, many film bloggers, such as Karina Longworth and Matt Zoller Seitz, are often incorporated into more mainstream venues. At the same time, bloggers such as David Hudson aggregate the most significant film news on the web, directing the attention of readers to the most significant film news of the day, ensuring that most film critics and cinephiles will continue to have access to significant ideas about film as they are unfolding."
---Stephen Rowley's thoughts on Pauline Kael
---David Gelernter's theories concerning dream-logic and the internet:
"Many people believe that reality is one thing and your thoughts are something else. Reality is on the outside; the mental landscape created by your thoughts is inside your head, within your mind. (Assuming that you're sane.)

Yet we each hallucinate every day, when we fall asleep and dream. And when you hallucinate, your own mind redefines reality for you; "real" reality, outside reality, disappears. No computer will be able to think like a man unless it can hallucinate.

Many people believe that the thinker and the thought are separate. For many people, "thinking" means (in effect) viewing a stream of thoughts as if it were a PowerPoint presentation: the thinker watches the stream of his thoughts. This idea is important to artificial intelligence and the computationalist view of the mind. If the thinker and his thought-stream are separate, we can replace the human thinker by a computer thinker without stopping the show. The man tiptoes out of the theater. The computer slips into the empty seat. The PowerPoint presentation continues.

But when a person is dreaming, hallucinating — when he is inside a mind-made fantasy landscape — the thinker and his thought-stream are not separate. They are blended together. The thinker inhabits his thoughts. No computer will be able to think like a man unless it, too, can inhabit its thoughts; can disappear into its own mind. 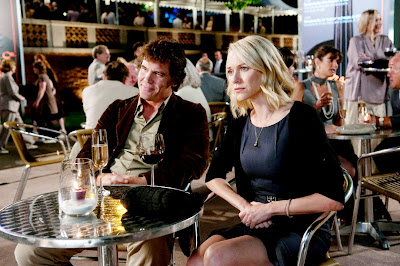 ---the internet's effect on the way we communicate (thanks to @osulop):
"Even in the unstructured, verbal medium of the comments field, with no built-in retweet button and no formal system logging the repetitions, we see a number of people avoiding using their own words in order to instead “cast a vote” for someone else’s. They deliberately represent themselves as part of a countable mass (in this case, of devoted fans), rather than as an individuated person with a novel point of view. I have no idea how widespread this particular trend is, but I think it exemplifies an ongoing shift in the way online communication is done, one in which Twitter plays a big part (and I find no sign of people doing this prior to Twitter’s rise). The retweet has developed a draw above and beyond the mere ease of sharing it provides — it’s actually become a preferred way of communicating, at least in some circumstances. Twitter’s own display of the day’s “trending topics” regularly encourages massed groups of users to marshal themselves together and overwhelm the ranking with retweets, or with tweets containing some key phrase (sometimes celebrating a Jonas brother’s birthday, sometimes entering a viral publicity contest).

Another recent phenomenon has been the spread of voting systems and “Like” buttons across the web, spearheaded by Facebook and major social news-aggregating sites like Digg andReddit. Almost everywhere you go now, comments and content can be thumbed-up or Liked or otherwise publicly rated. Earlier this year, Youtube switched its age-old five-star video rating system for “Like” and ”Dislike” buttons. While removing all nuance from its rating system might look like a senseless dumbing-down, Youtube explained that it had perfectly good reasons for doing so: the vast majority of video ratings, it turns out, were either five stars or one star, so people in essence used the rating system as a like/dislike button anyway. By the same token, many websites’ comments sections already consist of a bunch of people saying largely the same few things over and over; why not cut the self-importance (the universal conviction that I have something special to say that everyone ought to hear) and consolidate the discussion to a few key points instead? Maybe the younger “internet-native” generation, long immersed in the web’s anonymous cacophony, is just recognizing this early, and gravitating toward kinds of expression that resemble throwing in a lot rather than standing on a soapbox. But we’re all increasingly using these more streamlined ways of communicating online. What’s worrisome is wondering if this might streamline how we can think and relate to others, too."