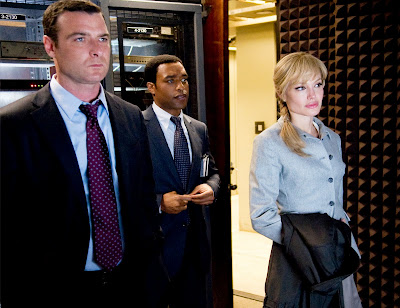 Beginning with some unnecessary torture porn in a North Korean prison and climaxing with some cheesy nuclear gamesmanship in a far less impressive war room than the one in Dr. Strangelove, Salt works best on one level: run Jolie run. See Jolie jump. Like Houdini slipping out of his chains, CIA agent Evelyn Salt (Jolie) eludes, evades, and outfoxes a CIA dragnet once a Russian defector Orlov (Daniel Olbrychski) accuses her of being a Russian spy. As security cameras observe her movements, she blocks them with spray from a fire extinguisher, bullets, and even her underwear, leaving her fellow agent Peabody (Chiwetel Ejoifor) exasperated and Ted Winter (Liev Schreiber) saying "Get your panties off the camera." Is Salt a Russian agent? Will she kill the Russian president in the midst of the U.S. Vice President's big funeral in a cathedral in New York City?
I heard that Tom Cruise was originally meant to have Jolie's role in Salt, and one can find some odd correlations between this film and the forgettable Knight and Day (although Jolie requires no Cameron Diaz sidekick). Both movies feature black CIA vehicles pursuing a rogue agent on the highway and a big motorcycle chase scene. Also, Peter Sarsgaard has a role in Knight that is very similar to Schreiber's in Salt, but I much preferred the spaghetti freeway escapes that Salt pulls off. One can't help imagining that to hop from an overpass into speeding traffic is suicidal, but Salt jumps onto a semi with ease, and then skips to a tank truck, and then bops onto a smaller panel truck where she does at least dangle off of the side by one hand. She effectively turns the freeway into her own personal playground. Later, in handcuffs, she shrugs off a car full of police in part by tazing one fellow into accelerating the car off an overpass and plunging down, peacefully landing on a bunch of vehicles far below, whereupon she walks away. I wonder how much scenes like this suit Jolie's fantasies of evading paparazzi? Whenever Ted Winter yells out "We need eyes" as Salt blocks the cameras, I was reminded of not only the Bourne series but also of the world's desire to see, photograph, and in a sense entrap Jolie at all times. The film perhaps reflects how Jolie handles fame, and why she might want to escape it. 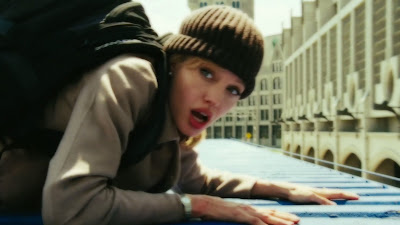 Beyond all of the action set-pieces, Salt is still an overly-processed studio concoction loaded with too many canned plot twists and portentous flashbacks (Salt takes itself more seriously than Jolie's Wanted (2008)). Casting around for a villain, writer Kurt Wimmer dusts off a leftover cold war plot with a Soviet-trained camp of super-agents, the KA gang, bent upon destroying the United States for nostalgic reasons(?). Salt does have her human side (giving Jolie the opportunity to act, exude tears, etc.), because she did get married and she has a cute Benjy-like dog.

Otherwise, one can watch Salt's coolness quotient ratchet up every time she kills someone dispassionately. In constant movement, she never has to pause to think. Instead, she just acts, instinctively stealing a hat or an outfit, dying her hair, or blowing up a building effortlessly. Episodically, the film casts around for ever more significant things for her to do (visit the president!). As a result of all this ramping up, suspense drains away, and the movie's plot mechanics look tired compared to those of last week's Inception. Ever the star, Angelina Jolie can move on, but Evelyn is still trapped in the conventions of Salt.
Labels: Salt

Richard Bellamy said…
As I watched this movie today, I had plenty of time to think of other things. (If your mind wanders for a while, you always come back to the same place in the movie - Salt running.) Anyway, one of the things that came into my mind was - I hope FilmDr sees this and writes a funny post. And you did. Thanks. I laughed.

To me the most ridiculous gimmick was Salt persistently tazing the poor driver of that cop car and always getting just the right amount of acceleration out of his spasmodically jerking foot.

My favorite character was her mild-mannered husband played by August Diehl, the fabulous Major Hellstrom, who played in last summer's most-written-about movie.

I knew Schreiber would turn out to be a bad guy.

Nifty that she could elude police and shoplift a Russian style fur hat from the nearest store so she could show up to the Russkie reunion looking so Russkie.

I hope all counter-intelligence buildings are made safe from cleaning fluids that can be used to make rocket launchers.

When she leaps out of the helicopter, that's the kick. It was all a dream, she's going to wake up in her apartment, stick her finger in the tarantula cage, and if it bites her, she knows she's not dreaming anymore.
July 24, 2010 at 10:22 PM

Anonymous said…
Your review of Angie Action Figure was good, could maybe have made more of the artificial plot. The tricks were worth more than the people or dogs, and the 14-year-old audience was pleased on purpose. And the adults were amused, which is all that matters to the popcorn-sellers, and the SC theater has a former clown and MC taking tickets, whose job is to cheer up gloomy theatergoers and make everything fun. And Angelina worked hard for her huge salary. She didn't perform any one kick as cool as when Brad stabbed the big goon by jumping over his head and hitting him by surprise in the back, in Troy, but she did OK with her martial arts moves.
July 25, 2010 at 8:39 AM

Then again, Salt jumps into the freezing Potomac, but that doesn't faze her either. I would have liked the movie more if it dropped all pretense of plausibility and just let her run amok, killing people without expression randomly, coloring her hair red and green, hanging on of the edges of buildings, and jumping from vehicle to vehicle and tazing policemen all the way to New York City. Salt follows its own logic, finding ways to heighten its scenes without worrying too much about making sense.

Thanks, Anonymous. Yes, I guess Salt delivers the goods, but I still like to think a Jolie action film can have the intelligence and subtlety of A Mighty Heart (although it doesn't happen often).
July 25, 2010 at 12:17 PM

Daniel said…
You know I never actually connected the film's plot with Jolie's possible fantasies about escaping the paparazzi. No wonder she's in love with this movie and is banking on a trilogy.

Since you mentioned it, what bothered me about the first highway jump/roll is that, at least in my memory, she didn't bounce at all. What is she about 125 pounds? Falling twenty feet onto a truck moving 55 mph? And she sticks to it like glue?
July 26, 2010 at 2:07 PM

The Film Doctor said…
Thanks, Daniel. In its way, the freeway hopping scene is more dreamlike than anything in Inception. It leaves me wondering if one could safely(?) experiment with various humans attempting such a stunt, just to see how many would roll off, or miss the truck entirely, or bounce. The side jump from a semi to a tank truck appears more feasible. One would think that Salt would need a good coating of glue to stick to the top of a semi at all.

I agree with your review--the movie strains credulity too much to be that entertaining.
July 26, 2010 at 7:15 PM

Anonymous said…
Finally watched the movie...one HUGE glaring plot hole: The President knew who shot up the Situation Room and killed all of team.
When Salt was in the helicopter, I really thought the FBI guy would receive a call/message about who did all the shooting; but instead just the text about her prints at the scene of the massacre on the boat. So that alone muddled the ending for me.
August 18, 2010 at 1:15 AM

I had numerous problems with the ending, especially the extreme conventionality of ending with the president at all. Salt falls into freezing water, and that's no problem. I like the way the CIA guy had a change of heart, however.
August 18, 2010 at 5:18 PM