Some say the earth will end in fire: A Cliffs Notes version of The Twilight Saga: Eclipse 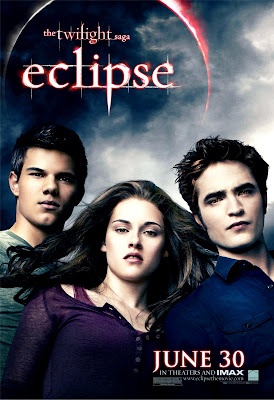 "You realize the [key to] marketing is just having your face everywhere, and that's it. It doesn't matter what you say." --Robert Pattinson in the 7/2/10 Entertainment Weekly
Given the lurid, overblown, overwritten quality of The Twilight Saga: Eclipse, I thought I could prove most useful to the world by providing a shortened version of the movie:
[In a sunny flowery field near Forks, Washington, Bella and Edward canoodle]
Bella: "Some say the earth will end in fire,
Some say in ice.
From what I've tasted of desire
I hold with those who favor fire." I can quote Frost!
Edward: Marry me, Bella!
Bella: Oh Edward!
[Jacob enters]
Jacob [to Bella]: You know you love me.
Bella: No, no, no!
Jacob: You just won't admit it to yourself!
Edward [incensed]: Get away from her!
Jacob: Here's a charm bracelet with a small wolf on it.
Bella: Thanks! [Jacob sulkily transforms into a giant wolf and trots off]
Edward: An army of newborn vampires are raising heck in Seattle, burning cars and stuff.
Bella: I don't love Jacob! 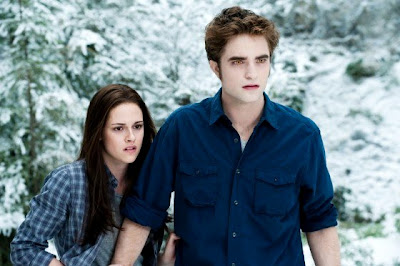 Edward: The army wants to attack you because you are the center of all things in Forks, Washington. There's some redheaded vampire involved. She tends to run around the woods a lot, jumping from tree to tree.
Bella: Oh, oh!
[Jacob reenters, shirtless]
Jacob: I need to carry you in the woods without my shirt on. There is some dramatic pretext for this.
Bella: Okay.
[Later, inside a tent up in the mountains at night during a snow storm]
Jacob: Bella's freezing in this tent. I must warm her.
Edward: Yeah. [Bella falls asleep in Jacob's strong shirtless arms]
Jacob: Those sinister Volturi, a civilized coven of vampires, have nice cloaks and hoods, don't you think? Edward: Yeah.
Jacob: And that tween, Dakota Fanning. Certainly, she is evil.
Edward: That goes without saying. [Pause. Snow gently falls on the tent. Bella snores lightly] The newborn vampires from Seattle are coming! Due to my mind-reading powers, I can sense that they just walked through a lake for some reason instead of crossing a bridge. Tomorrow, an uneasy werewolf/Cullen family alliance must battle a bunch of damp vampires.
Jacob: How come, when vampires fight, they break bloodlessly apart like mannequins or plaster figures? Aren't they supposed to be immortal?
Edward: What happens to your Abercrombie & Fitch shorts when you transform into a large wolf?
[Bella awakes] 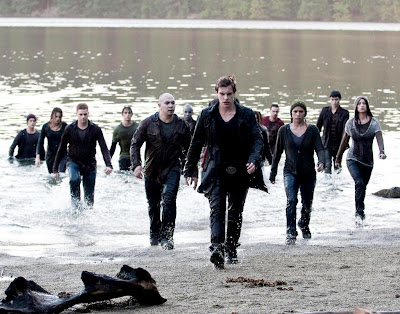 Bella: I just had a nightmare in which millions of females across the world allowed themselves to get hormonally duped into identifying with me and this endlessly protracted romantic triangle.
[Jacob and Edward grimace and look away]
Bella: Good thing that the Cullen clan of vampires and the werewolves have joined into one army to defend little old me. La di dah. [Bella smiles, gloatingly]
Edward [to Bella]: Will you marry me?
Jacob [to Bella]: You know you love me.
[Repeat for 124 minutes with swooning mountain scenery and mope rock montages as needed]
THE END
Labels: The Twilight Saga Eclipse

Ed Howard said…
I saw the first one and a half movies as part of a misguided drinking game with friends. That was enough for me. Well, that and this kind of hilarious and pretty much accurate summary of the whole franchise.
July 1, 2010 at 2:07 PM

Richard Bellamy said…
Very funny and true, in a sense, and yet I really enjoyed Eclipse. I thought it was much tighter, more suspenseful than the other two. I liked the flashbacks - Rosalie's and Jasper's backstory. (With Jasper's backstory I almost thought I had suddenly found myself watching Jonah Hex again.) All the back and forth between Jacob and Ed is ridiculous, of course, because we know she'll stick with Ed.
July 1, 2010 at 4:26 PM

Simon said…
And then they did some dry-humping.

Yes, I would recommend a good stiff drink for anyone sitting down to watch that much of the franchise.

We can respectfully agree to disagree about this third one. I may be in the minority, but I liked the first Twilight the best mostly because it is the least burdened with the expectation of making tons of money. That sense of profitable gravitas ruins the latter two, while I liked the way Edward's aristocratic hauteur (why is he attracted to a temporary mortal anyway?) gave the first film a Pride and Prejudice sense of class mobility. As for the flashbacks in Eclipse (and why is the film called Eclipse anyway?), how are they integrated into the larger storyline? Yes, they help Bella see that being a vampire has its moral problems, but to me they seemed tacked on and not very well fleshed out, an opportunity for a little historical costuming. When I watch the Twilight films, I'm always reminded by how much better The Hunger (1983) is.

Twilight also struck me as the most human with a better emphasis on Bella's dad and the high school gang. By now, all of the regular folk in Forks hardly matter at all, and Bella's dad is comically unaware of the CGI wolves hanging around the house at night. Bella lives in a world solely concerned with self-important melodramatic monsters.