Fighting at the altar: the fetishes of Bride Wars 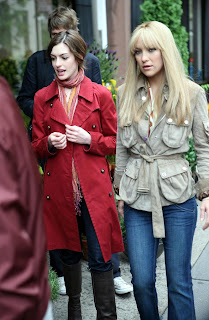 It's too easy to mock Bride Wars as the reductio ad absurdem of Bridezilla wedding movies that began with Four Weddings and a Funeral, continued with the multiple wedding carpet-bombing of 27 Dresses, and reached a syrupy-sickly apotheosis this summer when Meryl Streep's character stole the wedding from her daughter in Mamma Mia!, not to mention Carrie Bradshaw appearing in Vogue in her Vera Wang wedding dress before Mr. Big jilts her at the altar in Sex and the City. Now producer/star Kate Hudson has paired up with Anne Hathaway to duke it out over who will get to have her June 6th wedding in the Plaza Hotel, since the rest of the month is booked up. As much as I tried to obey Dennis Cozzalio's New Year's Resolution to not see Kate Hudson in bridal gear in 2009, I regret to admit I saw the movie on a Saturday night with a reasonably enthusiastic crowd.

I don't pretend to understand why women fetishize weddings. I always thought the larger the wedding, the more pressure on the couple, hence the greater likelihood of a quick divorce. Is it the impression of virginal purity in the white gown (As Susan Sarandon says in Bull Durham, "Honey, we all deserve to wear white"), the opportunity to spend huge amounts of someone else's money, dress up one's bridesmaids as one pleases, or is it the happily ever after Cinderella fairy tale quality of the ritual? I wouldn't know, but Bride Wars begins with two girls determined to get that June wedding in the Plaza some day, nevermind other concerns like their careers.

As a form of entertainment, Bride Wars has the nutritional value of a Diet Pepsi. It goes down kind of smoothly, but leaves little impression beyond a bitter aftertaste. Kate Hudson's character, Liv, is supposed to be an aggressive litigator, so she must learn to not be such a control freak. Hathaway's character, Emma, works as a beleaguered teacher of something in a middle school (although we never see her teach), so she needs to learn to stand up for herself. That's really as deep as the characterization gets. When the two begin to fight over the precious June 6th wedding date, I kept thinking of other better movies. When Liv begins to over-eat due to Emma's sneaky candy and cookie presents, thereby preventing her from fitting in her Vera Wang gown, I was reminded of Mean Girls when Rachel McAdams was obliged to do much the same thing. The pranks they play on each other are more adult variations of Lindsay Lohan's summer camp pranks on her twin (and vice versa) in The Parent Trap. Meanwhile, the two grooms are utterly indistinguishable from each other as the rest of the cast tends to disappear into a prosperous WASPy whiteout.

Mostly, I found myself wondering about Kate Hudson's hairdo and what happened to her since Almost Famous. She is known for "lighting up a room," but in this film, her bangs hang over her eyeliner-enhanced eyes. Only 29, she looks prematurely aged by fame, especially in comparison to Hathaway, who has only begun to mess with her Disney Princess image in vehicles such as Rachel Getting Married. In the acting competition between the two, Hathaway appears more natural even when she's obliged to wear an orange fake tan. Perhaps Kate has been working too hard. Churning out two or more mediocre romantic comedies a year is bound to take its toll on anyone.
Labels: Anne Hathaway Bride Wars review romantic comedy

Wendymoon said…
This is one of those movies where the preview told me everything I needed to know (including that I didn't want to see the movie). Two BFFs turn into enemies over a wedding date/venue? I know this is meant for light entertainment, but what does it say about the value of friendships and the importance of weddings vs. marriages? It's not a premise I find amusing.
January 15, 2009 at 2:14 AM

Good points. I don't know entirely why I went to see it either. I guess I was curious about the inbreeding of this kind of genre. After the excesses of 27 Dresses, I wondered where this kind of film could go. One thing's for sure--there's still a market for it--these movies propagandize for the lucrative wedding industry. But the basic conflict between the two BFFs is never all that convincing.
January 15, 2009 at 7:04 AM