"Tell Me How You Cheated" : questions about the cultural discrepancies of Slumdog Millionaire 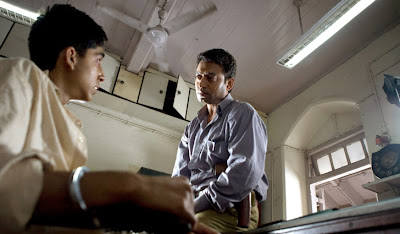 “Jamal Malik is one question away from winning 20 million rupees. How did he do it? A) He cheated. B) He’s lucky. C) He’s a genius. D) It is written.”

"MUMBAI, India —Slumdog Millionaire was made about the people of Mumbai's teeming slums, but it was not made for them.

In the squalid shantytowns of Nehru Nagar, where parts of the Oscar-nominated film were shot, there was little of the excitement that has swept India since the low budget film emerged from obscurity to win four Golden Globes and 10 Oscar nominations. --- from an AP article by Erika Kinetz

"really, was there a worse-directed movie than "Slumdog Millionaire" this year? . . . the opening sequence . . . intercuts an interrogation on "Who Wants to Be a Millionaire" with the eye-candy torture (beating, high-voltage toe-shocking) of a kid who's tied up and suspended from the ceiling -- all with thudding music (just like the TV game show!) and Dutch angles galore. "
---from Jim Emerson's "Oscars: No comment (almost)"

1) I confess that I largely enjoyed Slumdog Millionaire as I have enjoyed most of Danny Boyle's movies extending back to Shallow Grave (1995). Trainspotting still strikes me as his best film, in part due to its edginess, its critique of middle class consumerist values, and its cheerful punk nihilism. Slumdog Millionaire makes some nods towards Trainspotting, specifically in the way both movies feature a character who will brave immersion in fecal matter to arrive at some badly needed goal, but I found myself suspicious of Slumdog's uplift as soon as I left the theater. The film has many pleasures, but it is also very manipulative, as Jim Emerson pointed out, leaving me wondering how much Boyle might have "cheated" to gain to its critics' "mad love," as Peter Travers puts it in his Rolling Stone review.

2) Why do we need Boyle (who comes from Manchester, England) to direct this story taken from the Indian novel Q and A by Vikas Swarup? He hired Indian co-director, Loveleen Tanda, to help him, but I still wonder, given all of the Oscar hoopla, how much Western filmgoers seem to prefer Western directors' interpretations of India.

3) For example, there's the mixed reaction to Wes Anderson's The Darjeeling Limited. I enjoyed that film too, mostly because of its brilliant art direction, but it remains a movie compromised by three Western brothers obtaining Beatles-esque enlightenment from Indian mise en scene more than anything else, leaving the Indian characters as little more than window dressing.

4) Critic Jim Emerson suggests that the characters in SM are one-dimensionally good or evil, but I found Irrfan Khan's role and performance as the police inspector more subtly indicative of the film's shift in emphasis. Khan initially appears sadistic, certainly a "bad guy." Khan, however, has a history of playing more likable roles, such as the dad whose son dies in The Darjeeling Limited, and the father in the film version of Jhumpa Lahiri's The Namesake. As a result, I think the audience is primed to not hate the police inspector. He also becomes more sympathetic as the film progresses, ultimately "believing" Jamal's stories about his life.

5) What about Jalim's torture at the beginning of SM? Is it really necessary in terms of the story, or does Boyle ramp up the atrocities in the first half of the film to help create a better sense of uplift in the end? Boyle films so many of the film's harsher scenes from the two brothers' perspectives--the assault on their mother, the beatings, the electrocution of Jamal's toes, and especially the blinding of a child (which caused one woman behind me to walk out of the cinema)--the viewer is left pummeled, and therefore all the more primed to enjoy the big switch to a much happier conclusion. The sweet end of the film reminded me of nothing so much as The Graduate. As Owen Glieberman writes for Entertainment Weekly: "with Boyle working at full boil, it [the film] is also an unabashed concoction — a movie that turns the horror of broken Indian childhoods into a whooshingly blithe, in-your-face picaresque. Not since Les Miz have you felt this gooey-good about kids whose lives were this bad."

6) For all of the film's beauty, its redemptive sense of Mumbai rising out of its poverty by sheer street smart hustle, and its dream of extreme class mobility, I still wonder about how much Danny Boyle deliberately packaged this story for Western consumption (and by extension, the Academy of Motion Picture Arts and Sciences). Even Jamal caters to the Western tourists' preconceptions by lying about how "lazy, good for nothing, Indian beggars" wrote the Taj Mahal guide books. In turn, how much does Slumdog Millionaire play on our guilt, fears, and dreams of Indian enlightenment?

Anonymous said…
Thanks, Doctor. I too enjoyed the film (it's very engrossing, and its energy is hard to resist), but felt ambivalent after it. Why is it that the only films about extremes of poverty that get massive international exposure are the ones that imply that poverty can be transcended by luck or fate?

P.S. Danny Boyle is from Machester, not Scotland. But have you noticed how little press attention is going to his co-director? I'm not sure how they divided the labour, but I've barely seen Loveleen Tandan mentioned in connection with the film.
January 26, 2009 at 4:33 AM

The Film Doctor said…
Thanks for the comment and the correction, Dan. I was thinking of writing a series of reviews on Boyle's earlier work. It would be interesting, for instance, to analyze 28 Days Later in terms of his other movies. Also, I get the feeling that the debate is just getting started about Slumdog Millionaire.
January 26, 2009 at 7:40 AM

Jason Bellamy said…
Good questions. Although I think the answers might not always be incriminating.

For example: Sure, Boyle is directing this movie for a Western audience. But I don't see harm in that. And, no, I don't think that "Slumdog Millionaire" is a great historical, cultural, sociological lesson on India. But I don't think it's pretending to be one. To use your example, no one ridiculed Wes Anderson for his depiction in "Darjeeling." So why should Boyle be held to a different standard, unless one assumes the film presents itself as TRUTH? But how could someone think the movie presents itself as truth? From that initial trivia question (which we can answer without watching the rest of the film), we already know this is a fable.

Anonymous said…
Mr. Emerson is a practically sole dissenting voice in an overwhelmingly positive critical concensus for this film nationwide. I must say I most certainly do not feel ambivalent about it at all--I feel exhilarated and count it as one of the best films of the year. After it wins the Best Picture Oscar, it will lose some luster, as there are people out there who always feel whatever film wins HAS to be overated. This is visceral filmaking with operatic intensity, engaging performances and a buffo ending. (and a very good score) I don't blame you good Doctor for liking Boyle since the beginning. Wonderfully structured essay here!
January 26, 2009 at 9:34 PM

The Film Doctor said…
Thanks, Jason, for your insights. I don't mean to be overly critical of Slumdog Millionaire. I'm mostly just curious as to how a critic's cultural orientation may affect how s/he responds to the film. I talked to an Indian colleague about the film yesterday, and she said she found the film overrated, but otherwise entertaining and mostly accurate in its depiction of torture.

Thanks, for your perspective, Sam. I agree with you about the visceral filmmaking technique and the excellent score. I also liked working out the correspondences in the characterization of Jamal and Salim at different stages of their lives.
January 27, 2009 at 9:32 AM

Pacze Moj said…
The film is entertaining, but I think the aspect that's most-overblown is its originality. Critics see Boyle as ushering in some kind of new wave of filmmaking (the word "global" gets tossed around a lot) whereas the film is quite traditional Hollywood: in terms of structure, portrayal of an exotic foreign land, manipulation of emotions, etc.

Thanks for your comment. The originality of the film never bothered me as much as its manipulative aspects. I would agree that Salim's character, especially, follows an age-old gangster convention.
January 28, 2009 at 10:11 AM

I was surprised in some ways however, that he left the only real Bollywood connection so far as i can tell (in terms of the singing and dancing tradition right until the credits.)

I think that a real 'crossover' of the genres with such a touching tale would create a real harmony.

But i think you are right, he did make the first half of the film a lot harsher which in turn created a desire for the charecter to come out on top.
February 4, 2009 at 10:58 AM

Joel Bocko said…
I liked the movie but the ending got on my nerves (not so much the Bollywood dancing, by which point the film-as-social-commentary had already gone off the rails, but all the cliches, the narrative dead ends - why do the police get away with torturing a celebrity again? - and especially the absurd image of Jamal's brother climbing into a tub of money for the climactic shoot-out).

How does the recent news of the filmmaker's exploitation of the actors affect your views on the movie?
February 4, 2009 at 2:55 PM

Thanks for the comment. I do wonder if Slumdog Millionaire is in part some sort of psychological trigger mechanism that pummels the viewer into wanting an unlikely love-conquers-all conclusion.

Yes, I never understood the tub of money either. Was it some sort of grandiose penance, a way to stain money with blood, or a renouncement of his life of greed? At any rate, it's a flamboyantly visual way to go out.

I heard that the filmmakers did not exploit the actors, so, due to a lack of definitive knowledge, I reserve judgment on that point.
February 5, 2009 at 8:10 PM