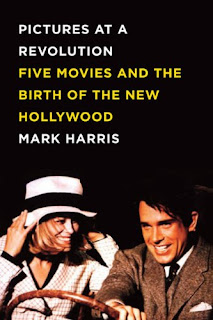 "Beatty and Penn's discussions often concerned aspects of the script as small as which word in a line should be emphasized or as unquantifiable as the tone of a particular moment. A flourish, a camera angle, a reaction, a grace note--no issue was too trivial to stop both men in their tracks. `What else is making a movie,' Beatty said, `except attention to detail?'"
--from Mark Harris' account of the making of Bonnie and Clyde in Pictures at a Revolution: Five Movies and the Birth of the New Hollywood.

1) I wish I was deeply involved in arguing with Warren Beatty and Arthur Penn over the making of Bonnie and Clyde back in 1963 in Texas, with Faye Dunaway looking on. Instead, I'm trying to persuade a bunch of easily distracted teenagers to make halfway decent 10 minute videos. I try to tell them that their impatience with a shot will show in fifteen different ways later on the big screen. The camera is remorseless in this respect, and everyone who watches the video will know. At one point, I started to praise the more perfectionist director for her careful storyboarding of her action scene, and one guy replied, "But they were much more stressed than we were!" I said it doesn't matter a hundred years from now how stressed the crew is. What matters is the quality of the footage. When the students weren't horsing around, popping the bottom out of a bottle of soda into a trash can, lying half asleep on the classroom floor, or pausing to watch a Bee Gees video on their laptops when I had safely left the room, they sometimes composed a decent shot.

2) Today we started off looking at the storyboards for Hitchcock's North by Northwest before watching the famous airplane attack on Cary Grant in the Illinois cornfields. I then approved of two of the three screenplays, their accompanying storyboards, and some rough shooting schedules. So while one group finessed their script, the other two headed out into town to make a movie.

3) First stop, Belk department store. I was surprised by how long it took to set up an establishing shot of the exterior, how often one waits around as the camera man tinkers with the tripod. When the sun wasn't over-exposing the edge of one shot, the students had to shoot a simple walking scene over and over to keep the subject centered as the camcorder panned to the right. Eventually, the preppy character selected some panty hose for her evening jewelry robbery, after which we shot a shoplifting scene at a nearby gas station. As one student repeatedly left the store with his "stolen" Cheeto's bag, one bystander asked if we wanted him to tackle the thief, and we politely said no.

4) Tomorrow, the really heavy shooting begins in the museum, neighboring houses, some woods, and some restaurants downtown. Wish us luck, or better yet, attention to detail.
Labels: video production notes

Richard Bellamy said…
Sounds like you're making progress! And you're so right about being patience with shots. My leading filmmaker in the Film Club always advises others not to plan too many shots for a given shooting period. She's always telling them that it takes a lot longer to set up a shot and do a number of takes than they think.

Also sounds like your students can walk into town and do shots there. That's a great opportunity. We're tied to the school - or what the students do on their own on weekends. Once the group as a whole was working on a film that would take place in a Starbuck's where they had gotten permission to shoot. That involved a field trip - a bus - but it was a lot of fun, and they filmed it in an afternoon - though that required careful planning and strict storyboards.
January 12, 2009 at 9:15 PM

The Film Doctor said…
Thanks again for your comments, hokahey. How many shots would you recommend for one outing?

We are lucky to have a small supportive community. Even the local newspaper has agreed to print some mock news stories for one of their films.
January 13, 2009 at 8:22 AM

The Film Doctor said…
Thanks, JUS. It can be a bizarre disorienting experience, especially when students realize they need to scrap three hours of shooting and start all over again.
January 13, 2009 at 3:47 PM

Jason Bellamy said…
FilmDr & Hokahey: I had a thought for both of you.

You might consider showing your students some of the Stella Artois commercials. (At least a few are availabe on YouTube.)

Those films are essentially silents. They are perfect examples of "show, don't tell." And in 30 seconds they can tell a sprawling story.

Yes, I get sick of them after the same one plays for six months before each movie at the local arthouse. But I certainly admire them.

Richard Bellamy said…
Jason - I actually have mentioned the Stella Artois commercials to my young filmmakers, and I often suggest they film stories that have little or know dialogue so that they can work on SHOWING the story.

One student filmed a silent story of a wandering orange and used the kind of French accordion music that often accompanies those commercials.

FilmDr - We had about two and a half hours for our outing to Starbuck's. The students had a storyboard to follow and they had to do about 15 different shots in that time frame.

To their advantage, the story had only a couple of lines of dialogue that needed to be heard, and the story was simple: lonely girl goes to cafe; jealously watches couple in love; notices a lonely boy; they exchange shy glances; he gets up to leave; he drops some change; she helps him pick it up; they're too shy to say much; he leaves; she looks sad; he returns. They successfully completed all the shots, we had time to enjoy Starbuck's, and then we took the bus back to school.

It was lots of fun and I would like to plan another film-shoot field trip - perhaps to a location where a number of groups could shoot their stories at the same time.

As for scrapping a whole shoot and filming over - that's happened a number of times, but the acting always comes out better. Being busy teenagers to whom planning ahead is anathema, my students hardly ever memorize lines; they come to the shoot (or drama rehearsal) to learn lines - of course, that only adds to the complications of the shoot.
January 13, 2009 at 7:56 PM

Thanks for the tip. I don't think I've ever seen a Stella Artois commercial until now, but they are funny and useful.

I'm glad to hear that you are getting out to do some location shooting. I talked with the class a bit about the idea of building some sort of set design for a shoot, but they prefer using other places. I think much of the fun of the class is just getting out of the classroom and getting some fresh air. At other times, as they haul the equipment around, it can seem disturbingly like work.
January 13, 2009 at 9:08 PM