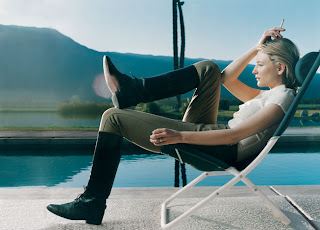 ---In That Shakespeheriean Rag, Steven W. Beattie finds that "Reports of the blog's death has been greatly exaggerated":

"In the world of book chat and literary criticism, the avenues for serious discourse are dwindling. Newspapers are cutting back on their books coverage drastically, if not eliminating it outright. (The sole Canadian exception to this distressing trend seems to be the Winnipeg Free Press, which actually increased the volume of book coverage in its pages in 2008.) Long-form criticism does not fly in today’s anti-intellectual, anti-critical environment, but it is precisely this kind of criticism that the writers of literary blogs could potentially excel at. They are not beholden to advertisers or corporate interests, and therefore are freer to avoid the kinds of market-driven pieties that are the scourge of much of the literary mainstream."

---For The New York Times, David Carr notes the difficulty of seeing all of the Oscar contenders this year in "I'm Trying to See All of These Movies. You Want to Talk? Go home." Kudos to Nathaniel R. for getting his Film Experience blog mentioned in the article.

"UNDERWORLD: RISE OF THE LYCANS

WILL IT SUCK?
Even though Len Wiseman, who helmed the first two, has moved on to Die Hard and such, he still had a hand in the story and Undervet Danny McBride (not that one) had a hand in the screenplay, so we should see some consistency, for better or worse. One thing I can say is that they're finally focusing on what, for my money, are the series best assets: Bill Nighy and Michael Sheen.

HOW WELL WILL IT DO?
The introduction of Rhona Mitra is only going to make up so much for a lack of Kate Beckinsale. $44mil."

---Invisible Woman interviews director Pete Chatmon about his thoughts for younger filmmakers about whether or not they should go to film school:

"It's not about film school. It's not about talent. It's not about contacts. I have friends who's parents, in my eyes, are like kings and queens and titans of business. But the children don't necessarily achieve on the same level. Now, they may "fail upward", but the dedicated pursuit of a life's goal is not there despite the available contacts. I always say that I am far from the most talented filmmaker, yet there are people I graduated from NYU with who were more talented and still haven't made a feature film. Some may not even be on a directing track anymore.

Personally, I know that I will not allow myself to be out-hustled (from IW-i noticed!), and that doesn't just mean being up late and thinking. That doesn't impress anyone because one you hit 15 years old, staying up late ain't even hard anymore. It's about WHAT you are thinking about when you're up late. Out maneuvering the competition. Pushing yourself creatively."

---As a reader of The New Yorker, I just love posts like Bill Wyman's "Tina Reinvents the Web," which looks more closely at Tina Brown's success at Daily Beast.

---Leslie Bennetts of Vanity Fair profiles Cate Blanchett, and finds she can be quite different off-camera (or perhaps she just doesn't like being interviewed?):

"Most striking of all is an absence of the intense laser-focused charm that stars and politicians turn on and off as if flipping a switch; Blanchett seems to lack their reflexive need to make everyone love them. As an actress, her elastic face provides a blank canvas for a dazzling range of transformations that are facilitated by the egoless state she strives to achieve in the name of “fluidity.” In person, she is willing to sit and answer questions; she is cordial and cooperative; but you have the feeling she might actually be thinking about the weather, and perhaps she’d just as soon be folding laundry."

---Writing for The Dancing Image, Movieman0283 nicely summarized both his best work last year and the best of other bloggers.

---As Aaron Hillis takes over the venerable GreenCine Daily, I found his thoughts about the changes in film criticism interesting:

"I'm of the old chestnut about attracting more flies with honey than vinegar, and though my own tastes are perhaps eclectic, I'm too much of an old-school hippie (minus the smelly armpits) to want any of that inaccessible from the masses. Isn't the "death of film criticism" argument about nobody caring anymore? Perhaps that's because very few are trying to bridge the extremes of the cultural spectrum, and even the so-called gatekeepers and tastemakers are too busy feeling threatened about their words no longer carrying weight to try to remedy the situation. I personally believe The Dark Knight deserved to be as thoroughly dissected and written about as Profit motive and the whispering wind, even if the latter is a tiny little gem that needed the attention more. It's an oversaturated world, and it's impossible to keep up, but there's no reason to alienate those willing to learn, absorb and contribute to the conversation. What's sorely lacking from the film blogosphere is this attempt to expand our base."

---In the illuminating "Behind the Blog series in Film in Focus, Michael Guillen makes some good points about the benefits of blogging:

"The Evening Class has thoroughly enrichened my life and I can only wish for others what my site has done for me. It gave me purpose when I had lost all purpose. It gave me a fulcrum to focus the skills left to my disposal when disability took away so much of what I had known. It introduced me to a global community through not only the films themselves but through those who write on film. Each month my range increases exponentially, more and more opportunities arrive like unexpected gifts, I learn each and every day something new and important about the world, and—most of all—it has allowed me to maintain something I have always believed in: that you must dream in detail and that in the detailed manifestation of a dream, future dreams arise."

---I enjoyed Gus Van Sant's early short film entitled "The Discipline of DE," thanks to Cinematical.

---Lastly, A. O. Scott provided us with a skillful video review of Billy Wilder's immortal The Apartment, but isn't there at spoiler problem here?
Labels: Notable film and media links