Resisting the myth: Daniel Craig and the pleasures of Defiance 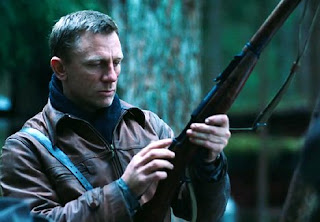 It took me a long time to appreciate Defiance and its story of two Jewish brothers who rebel against the 1941 Nazi invasion of Poland by hiding out in the woods. The trailer made the film look cheesy, ponderous, redundant, and self-important. The first five minutes of the film are both emotionally manipulative (Nazis tearing children from their mothers) and annoyingly like Schindler's List. I found myself meditating on why would Daniel Craig choose this role of Tuvia Bielski now-- Moses in the midst of all of the Bond hoopla? Liev Shrieber also looks too recognizably American in his role as Tuvia's brother, Zus, no matter what Polish accent he affects. Also, I wondered how Defiance would handle the basic problem of conveying Hollywood action and uplift amidst Nazi atrocities without falsifying the latter. Valkyrie took care of that by having Tom Cruise's character mention his outrage at the concentration camps in the beginning of the film. Defiance is old-fashioned in the way it treats Nazis as convenient villains, and it risks compromising its based-on-true-events story with commercial slickness throughout.

And yet, even though Stephen Spielberg should write a strongly worded letter to Paramount about stealing story points from Oskar Schindler, Defiance has its good points:

1) Like Robin Hood and his band of merry men, Tuvia and Zus are at ease in the forest, engaging in guerrilla raids, taking nips from a bottle of vodka. The woods doubly suit the film's blue-filtered cinematography and the nonchalant boy scout ability of the Bielski brothers. The movie takes on the loose ambience of a camping trip, and the absence of walls frees up the action, giving it a pastoral cheerfulness usually lacking in other Nazi films.

2) It also helps that neither neither Zus nor Tuvia know entirely what they are doing. Early on, they ask each other "Do you have a plan?" "No, do you?" Unlike Colonel von Stauffenberg, Tuvia makes mistakes. The brothers go on a vengeful Nazi hunting spree that almost gets their younger brother Asael (Jamie Bell) killed. Even later in the film, when the Moses references get oppressive, Tuvia and Zus punch each other out in front of a bunch of mystified refugees. In opposition to the screenplay's slick machinations, Tuvia and Zus improvise as they go along, and it's fun to see Daniel Craig stumble over the ethical dilemmas that arise from his character's attempt to save others. When one of the refugees tells him "If you save a life, you must take responsibility for it," Tuvia replies like the errant schoolboy he is: "I have no idea what you are talking about."

3) Lastly, in an age of Paul Blart: Mall Cop, it's pleasant to see old-fashioned masculine (practically Hemingwayesque) virtues on display. As the younger brother, Asael gradually moves from being a weepy mess to the leader of the camp when Tuvia loses his bearings after getting bombed by fighter planes. Even as Zus meditates on the Jews being victims (he sardonically says to himself "What we are good at--dying,"), he constitutionally can't see himself except as a rebel and a fighter. Even Tuvia resists the Biblical parallels just as Craig may have chosen the part to distance himself from Bond cliches. Tuvia's and Zus's scrappy reluctance to play the role of the hero, in stark contrast to Tom Cruise in Valkyrie, ultimately makes Defiance more compelling than one might think.
Labels: Defiance

Richard Bellamy said…
You seem to express appreciation of "Valkyrie" - which I enjoyed. However, I found "Defiance" rather disjointed - though I liked pieces of it. I agree - the beginning is a weak attempt to copy "Schindler's List" - though the plot points are historical and typical of that tragedy so I don't think Spielberg would have anything to complain about.

What I liked about "Defiance" is that I felt the cold and damp and their hunger. All of that was very convincingly depicted. When they got rained on or had to cross a swamp - I thought - in Russia, in those woods, it's going to take forever to dry out. So, physically, the film was very realistic. It just didn't build enough power for me to be totally invested in it.
January 19, 2009 at 11:39 AM

The Film Doctor said…
Good points. Perhaps my recent experience with the video production class helped me appreciate the more skillful shots. Defiance tries to go beyond Schindler's List in the way it redefines forms of revolt against the Nazis. It does not entirely succeed, but I found it an intriguing attempt.
January 19, 2009 at 8:23 PM

Agreed. And that's also what's been refreshing about some of the movies Mr. Ed Howard has been talking about during his Hawks blog-a-thon.

I was kind of on the fence about seeing Defiance before it left theaters (just too much else at the top right now...), but I think I might bump it up now.

The Film Doctor said…
Thanks, Fox. I full agree with you about Ed Howard's excellent celebration of Hawks. The men that Hawks celebrated seem increasingly rare in recent cinema, I think in part because guys today tend to spend so much time indoors (as in the mall). Watching Defiance is one (slightly ironic) way to appreciate getting out.
January 20, 2009 at 4:10 PM