Interview with a student filmmaker--Patrick Nugent 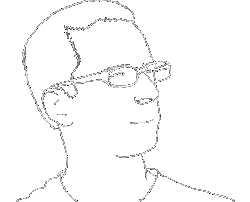 A Media Arts major at USC-Columbia, Patrick Nugent has been assisting me with my video production class for the past three years. This time he showed up in the midst of directing his ambitious senior project, a HD-Rotoscoped Pseudo-Science-Fiction Animated film entitled Alone Time. You can learn more about his work on his Demented Eccentric website.

Even though he's busy, Patrick kindly agreed to answer some questions concerning filmmaking:

1) What suggestions would you have for someone just beginning to make movies today?

Watch movies. Really watch movies. Figure out why good movies work and others don't. For someone like myself who loves animated films and films that are visually very strong, I often like to go back and study films shot by shot or frame-by-frame in the case of animations. If you love strong narratives and writing, then read as many screenplays as you can. Whatever your particular interest is, study as much of it as you can. If you can, find other people who are making movies and offer to work with them and learn from them.

2) Who are your three favorite directors at work today and why?

I love Michel Gondry, Spike Jonze, Don Hertzfeldt (animated shorts), and I'm fascinated by a greatly respect the hit-or-miss Terry Gilliam. Directors that are willing to take themes and stories that we can all relate to and package them in visually stunning, unique, and genuinely imaginative films are what I live for. Escapist cinema that deals with reality, if you will.

3) What are the classic traps that novice filmmakers fall into?

The alarm clock that starts a film. Pretentiousness. Wordiness. Poor shot variety. Copycatting other stylish directors. Poor attention to detail. Bad sound. Just look up "student film cliches" on Google for a much better list. But hey, if you have fun doing it, then it doesn't really matter.

4) What do you think of film school classes ? Are they really needed?

Film school isn't needed. If you know what you're doing you can go out and make a great film. Maybe. The thing about film school, if you do it correctly, is not the assignments or the grades or any of the academic stuff. Instead, it's the community of talented people passionate about making films that come together to network and help each other out in their spare time on each other's projects. That is the real value of a good film school.

5) What are some of the best places you like to visit on the web that relates to filmmaking?

Since I'm much more of a technical/special effects oriented filmmaker, a lot of the places I like to visit are technical resources. Creativecow.net is your best bet for most technical stuff, I also like provideocoalition.com. On the creative end I often visit slashfilm & cinematical (hollywood talk), indiewire (indies only), vimeo (imagine if youtube actually had good videos), and motionographer (beautiful motion graphics and animation).

6) Describe a typical day at work on your current film project.

A typical day on this project is hard to pin down. Lately it's been all about script revisions (I'm working on the 5th major draft right now, as a matter of fact). With each revision I let one or two more people read it. I take their feedback and sit on it a few days before I dive in to more revisions. We just held open auditions for the project which went much better than I had anticipated and I look forward to working with the cast. I'm currently scheduling different meetings with my sound designer, camera operator, and an associate producer to discuss sound, camera choreograpy, storyboards, scheduling, shooting locations, and the latest revisions. In a few weeks, it'll be all about a very lengthy post-production process. It's a lot of work and people wrangling but it's really rewarding to see this project that I started brainstorming about 9 months ago begin to come to life. Hopefully in another 9 months I'll be anxiously waiting on acceptance letters from some major film festivals!

The Film Doctor said…
My pleasure, Shawn. I trust we will get to see Patrick's movie soon. He says he should finish it this summer.
January 20, 2009 at 9:24 PM