Vampire-werewolf love: notes on Underworld: Rise of the Lycans 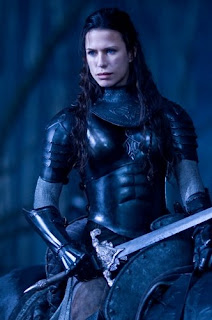 1) In case you were wondering, in Underworld: Rise of the Lycans, the Lycans do rise.

2) I have seen, and sort of liked, the other two Underworld films. Here's my summary of the first one:

In the war between the aristocratic Death Dealer vampires and the crude Lycan werewolves, Kate Beckinsale as Selena liked to perch like a gargoyle high up on the ledge of buildings and jump down five stories when it suited her, one leg bent slightly as she fell, to land with ease and walk away. The fact that she was a beautiful vampire warrior in a black leather dominatrix outfit never hurt, and even though the film built up to a ridiculous action climax involving the chief honcho vampire’s (Bill Nighy’s) head getting chopped in half diagonally, it still was a pleasantly campy exercise in Gothic excess.

3) Now that the original director, Len Wiseman, and his wife, Kate, have wisely decided not to participate in the third film (Kate appears briefly to reinforce one's negative reaction to her bland replacement, Rhona Mitra), the producers of Underworld: Rise of the Lycans inexplicably hired the creature designer, creature fabricator, and creature supervisor of the two previous films, Patrick Tatopoulis, to direct this lame prequel.

4) I don't know if it was me, or whether I was lulled by a dull rainy Saturday afternoon, or my preoccupations with Slumdog Millionaire, but I really don't remember Underworld: Rise of the Lycans all that well. I do remember when an audience member said "Yada yada yada" during one of Mitra's portentous speeches late in the film. So, these notes constitute what little remains of a deservedly forgotten experience.

5) Sadly, perhaps due to budgetary restrictions, Rise of the Lycans mostly limits itself to some dull indeterminate castle in the Middle Ages where the vampire king Viktor carries on a tidy Freudian psychodrama by almost killing at birth a fancy newfangled intelligent Lycan named Lucian, as played by, of all people, Michael Sheen). Michael Sheen plays David Frost in Frost/Nixon He also starred as a convincing Tony Blair in The Queen. What on earth is he doing playing a Lycan?!? For that matter, why is Bill Nighy tromping around as the vampire king with creepy bright blue animalistic contact lenses? Why are these good British actors pandering to D&D-playing Goth adolescents? Do they need the money?

6) Anyway, as befits a tidy Freudian psychodrama, Viktor's vampire daughter Sonja (Mitra) has been carrying on an illicit affair with Lucian, meeting on the edge of some underground cliff, and people are starting to catch on. For one thing, Viktor can always bite into his daughter's neck to get a rapid streaming flashback of her life, and when that uncovers her treacherous lust, Viktor jumps back, blood dripping down his chin, shocked and appalled, so he locks her in her room. The Lycans are enslaved animalistic brutes exploited by vampires. They are the lower than the lockstep working class yobs in Metropolis. How dare Sonja sleep with such scum?

7) Meanwhile, Lucian still must spur on the Rise of the Lycans. Much of the visual wit, flair, and fun of watching Beckinsale gracefully fall has vanished from the series. Instead, you get a lot of prison scenes with Michael Sheen roaring and rolling his eyes as the other prisoners grunt their approval. Lucian makes one escape attempt that involves a lot of large javelins skewering prisoners left and right, one right through one guy's head. Humans repeatedly metamorphose into werewolves. Nighy bugs out his eyes and proclaims "I am your father!" and "You defiled my daughter!" as he worries over the union of the bloodlines.

8) I used to like all of the campy blood-stained, blue-filtered, moon-lit, Death Dealer aristocratic hauteur of the Underworld series, but not anymore. Instead of following the plot, I found myself idly considering the design elements of the film such as the streamlined armor designs and the wailing Edward Munch-esque figures buttressing Viktor's throne. At one point, Lucian yells "We are not animals! Is this want you want? We can be slaves, or we can be... LYCANS!" Yeah, Lucian. Yada, yada, yada.
Labels: Underworld: The Rise of the Lycans

I saw this movie after work today. I didn't see the second one, but I saw the first b/c Kate Beckinsale looked cool in the leather.

You're right, I don't really remember what happened either. The incestuous neck biting memory scene stood out to me b/c I was perplexed as to what was happening for a sec.

The thing is, I really like Rhona Mitra. I think she has the potential to be a sexy action star like Beckinsale or Milla Jovavich, but I haven't seen her in anything worthy yet.
January 28, 2009 at 1:48 AM

The Film Doctor said…
Thanks, Fox,

It's hard to tell if I didn't notice Rhona because the movie is bad, or because she's less noticeable than Beckinsale. The producers of this version of Underworld seem quite happy to stripmine anything of interest in the series for an easy profit. If this keeps up, the franchise could attain a BloodRayne level of camp.
January 28, 2009 at 10:21 AM