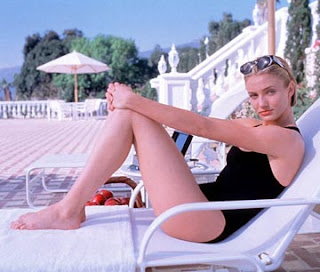 Note: In honor of Danny Boyle's superb direction of Slumdog Millionaire, here's an unchanged 1997 review of Boyle's A Life Less Ordinary from my preblogging days.

How does one characterize A Life Less Ordinary? Imagine Trainspotting meets It's a Wonderful Life meets Excess Baggage, with a healthy dose of gun-toting violence thrown in for good measure. In the recent tradition of carbon copy screenplays hitting the multiplexes of America in waves, A Life Less Ordinary takes as its basic plot structure a near perfect replica of the one used in the much inferior Alicia Silverstone film, in which a bored heiress manufactures her kidnapping to get back at her greedy corporate CEO dad.

In this film, Ewan McGregor plays a fired janitor who incidentally steals away Cameron Diaz after futilely trying to threaten her father and his boss (Ian Holm) into rehiring him. McGregor has made a career of playing likable geeks. In Trainspotting he's a mostly unemployed heroin addict with a skinhead buzzcut. In another upcoming film he acts as a night watchman. Here he plays his working-class-schmuck-with-a-heart-of-gold so well, I felt sorry for him much of the time.

Cameron has to talk him through the kidnapping process ("Have you asked for a ransom next?"), brings up the idea of sex, and basically shunts him along as she runs circles around him mentally. It struck me as awkward putting McGregor together with Diaz, much like pairing Arnold Schwarzenegger and Danny Devito in Twins. Seeming to realize this, the filmmakers of Trainspotting (who made this film) came up with a frame narrative involving two angels played by strikingly blond Holly Hunter and pugnacious Delroy Lindo dressed in 1930s gumshoe clothes, perhaps in reference to Frank Capra's It Happened One Night, the granddaddy of all cross-country hijinks romantic comedies.

We find Hunter and Lindo in a humorously harassed police precinct-like heaven where everyone wears white designer clothes. They learn they must bring McGregor and Diaz together or they'll never return to heaven. Much like Clarence does in It's a Wonderful Life, Hunter and Lindo show up on earth and try to dictate fate, in this case by supplying the "jeopardy" or conflict that they hope will bring the lovers together.

In this mixed bag of a movie that takes awhile to find its tone, the women stand out the most. Holly Hunter plays an astonishing pistol-packing moll in calf-length boots, a split between Emma Peel and Bonnie Parker of Bonnie and Clyde. My friend Robert noticed that she keeps using different accents throughout the film as she chases after McGregor and Diaz, but to me she just looked erotically intense, as if in jealous competition with the beauty of Diaz. We see Hunter cling on to the hoods of speeding cars, play dead on the roadside, and fall off of cliffs. It's her best comedic performance since she played the baby-obsessed wife in Raising Arizona.

Cameron Diaz is still looking for her best role, but she acquits herself well here, walking a fine line between simply conveying her gorgeous looks and summoning some emotion (She has yet to meet her male equivalent in any of her films). Still, the moviemakers deliver their proven moneymaking formula with as much perversity and playfulness as the genre will allow. I noticed in Trainspotting that these Scotts can smell a rotten convention in any twist of a storyline, and they reply with in-your-face shock tactics, self-aware ironic dialogue, punk music, and odd camera angles.

A Life Less Ordinary doesn't risk as much as Trainspotting. It's more a hit-and-miss affair veering between cartoonish violence, comedy, and tough '90s style love, but where else can one find pistol-packing sadistic angels?
Labels: A Life Less Ordinary