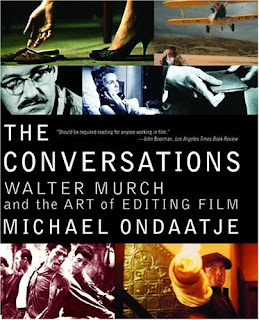 1) Today, we wrapped things up. I began the class with a brief discussion about continuity editing and matching action before showing them the montage from The Graduate when Benjamin floats in the family pool to the sound of not one but two Simon and Garfunkle songs. The montage is full of matching action cuts that mislead the viewer into thinking Benjamin is at home when he's at the hotel and vice versa. Later a student pointed out that I could have used the fashion montage from The Devil Wears Prada as another example.

2) Otherwise, the students sat around their computers and edited for much of the day. We had a couple computer failures for old time's sake--a software glitch and some drives on another computer lost--but the ever-helpful IT administrator fixed them quickly. As they fastforwarded and rewound scenes back and forth, the students reminded me of DJs scratching with turntables. In some cases, a tricky scene with conversation outside obscured by wind noises could easily take an hour to finesse. In other cases, students plunked down scenes artlessly. One would roll his eyes when I asked him to expand a scene for better comic effect or add on a sound bridge to make the cut less clumsy. Editing is a subtle, intuitive process, but the class benefits from the fact that students have seen countless well-edited films, so they can usually tell when a jump cut isn't working. In one case, a student was enormously picky about the video's title. I kept making suggestions, but none were good enough. From what I hear, Woody Allen works in the same way, taking forever to settle on a film title after editing it.

3) So, aside from further editing over the weekend, the class is finished, and they largely did excellent work. What have we learned?

a) Pinnacle is far superior to Premiere editing software for this class.
b) We still need to get external microphones and a boom, but in the meantime we can always dangle a second tripod and camcorder over the actors for better sound.
c) If you ask nicely, it's astonishing how just about everyone in the greater community will happily help make a movie. The only people to turn us down? The Dollar Store.
d) Usually problems with lighting cause students to have to reshoot whole scenes.
e) The video production class basically grades itself because the viewer can immediately see the 15 different ways a shot can be messed up.
f) The best directors combine patience, concentration, hard work, and imagination. They shoot the most scenes from the most angles, stick to the storyboards, and yet continually experiment with new techniques.
g) When the sound doesn't work, you can always fall back on another music montage.
Labels: video production notes

Jason Bellamy said…
Again, great job with this. I loved your last lesson learned (When the sound doesn't work, you can always fall back on another music montage) because it reminded me of something from my past ...

I went to a Catholic high school, and for our senior-year religion class, we had to do a large class project. We settled on making a film based on the Synoptic Gospels, which for students losing the battle to senioritis was a major coup, because it meant that only the guy who played Jesus had to work every day while most of the rest of us spent several weeks sitting around doing nothing. (I played John the Baptist, by the way, and I kicked ass. Well, no. But anyway…)

Like most amateur shoots using those old-school VHS camcorders, our project had problems. We had scenes where audio was lost, which led to the incorporation of Elvis Presley’s “An American Trilogy,” and we had scenes where VIDEO was lost, leading to a few audio-only scenes that were strangely effective. Just goes to support that “happy accidents” idea that directors and actors are always talking about.
January 17, 2009 at 9:05 AM

The Film Doctor said…
Thanks, Jason, for your comments and your support for this series on The Cooler. You mentioned "happy accidents." I would say the best videos are made in part because the directors allowed the least amount of mistakes to show, but there are moments of luck or fate--sunlight through the clouds, a moment of quiet on a crowded street--that can make a big difference in the quality of a film.
January 17, 2009 at 9:37 AM

Richard Bellamy said…
I loved your list of things learned. It's all a learning process and I love to see my students solve problems with their movies - like going to the 6th grade for tons of extras - or using previously shot footage in a different way to fill in for a lost shot.

I was also excited about your students being in the editing phase - a very exciting part of the process. I love how you can fudge over some mistakes - like creating a partial iris to darken out the sneakers someone wore in a film that takes place in the 1800s!

Your posts have inspired me to push for a credited filmmaking class - which I recently talked to the higher-ups about. Students produce a lot more when it is required. In this busy day and age only the really passionate filmmakers will do it on their own time. But providing filmmaking for even the non-passionate is yet another opportunity for learning how to plan, write, cooperate, negotiate, invent, and problem solve.
January 17, 2009 at 10:44 AM

Thanks for your many comments and thoughtful suggestions. Good luck with obtaining your credited filmmaking class. My regular film analysis class includes a video production component, but we often have difficulty scheduling the time for two hour shoots amidst the busy semester. The interim period allows the students complete immersion in the process for two weeks, and that tends to work better.
January 17, 2009 at 11:50 AM

The Film Doctor said…
Thanks, Louise. I'll resume another video production segment during the spring semester.
January 21, 2009 at 10:51 AM

Joel Bocko said…
Great series, sorry I only just caught up with it now. It reminded me of my own high school filmmaking days though I think my style was a little more impulsive than yours' and your students - besides having no lighting, I didn't usually shoot coverage and dialogue was improvised within what we knew the scene to be about. Still, they turned out pretty well - all things considered (I maintained a storyboard-less, loose style later and found better results from this than the more planned shoots - though crews noticeably prefer everything to be planned and predictable).