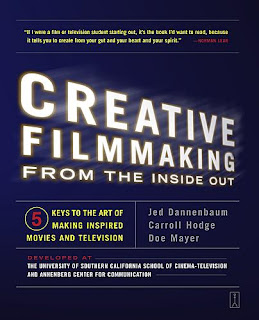 1) Today the video production class continued with location shoots much like yesterday (see the last post), only there was more sunlight, so the three groups worked outside even though it was colder. Each shot raised concerns about lighting, sound, camera placement, acting, and sometimes technical failure. At this point last year in the class, batteries ran out of juice and memory cards got corrupted with depressing frequency. Today I watched as the camcorders died on all three groups at one time or another, but usually they found replacement batteries quickly or stretched a extension cord far out into someone's yard to keep the cameras functional.

2) In the morning, I drove Group B over to the local college campus to shoot a scene where their drug dealer protagonist has to cover up for a student obviously high on cocaine during a chance meeting with administrator. I'm not sure that cocaine-users display much in the way of being high, but the guy sniffed, rubbed his nose, and acted strange enough. As long as the shot didn't involve sound, the videotaping went smoothly, but as soon as dialogue was needed, I was surprised at the level of difficulty they had in arranging for three guys to meet on the street, in part because the camera had to face away from the sun. I had told them to wear coats, and only some of them listened, but at least no one wore flipflops. It was cold, so eventually I took off.

3) Group C needed my help with my Hyundai Accent (practically a character in their video), so I found myself driving round and round one block downtown as they filmed the car from the front of the museum. As I backed out of a driveway to circle the block again, I meditated on the absurdity of all of the repeated motion. Much of video production involves standing around, cracking jokes, and watching as someone repeats doing something until you move equipment to the next set-up. When the two jewel thieves meet on the front steps of the museum, they exchange a few words, so we placed the camcorder close by and waited for a break in the traffic to allow a little quiet. The sound pollution of a given street or even a front yard is astonishing. Similarly, you never notice how noisy a room can be until you listen for the room tone. Later, Group A had to contend with the grinding of a neighbor's circular saw, cars driving by, and the crunching of pine needles underfoot. I was thankful when the cacophony would die down and arbitrarily stay quiet for a key scene's discussion.

4) Group A managed to procure a policemen for their afternoon murder scene. The local police chief even let them choose between a male or a female cop, an undercover or a "cop cop." They opted for the cop cop, so the guy had a pleasantly tough look--scarred cheeks, sallow skin, and close-cropped black hair. Fresh from investigating an actual hit and run, the policeman positioned his car on someone's front yard, turned on the blinking lights when needed, and was all around an ideal extra (he has even had some experience in acting). Holding a small pad and pencil, he politely interrogated the lady of the house about the murder, walked over to the murderess and crouched down to listen to her account of what happened. He obediently said his lines over and over until the 17 year old director was happy with each close-up, long shot, and even an insert shot on the murderess's hands as she sat on a stump and sputtered out her (false) story. Then he shook everyone's hand and drove away. It helps that everyone wants to be in pictures.
Labels: video production notes

Richard Bellamy said…
FilmDr. - "It helps that everyone wants to be in pictures." That made me laugh after a long hard day. Thank you very much.

No filmmaking for me today though - it was a drama rehearsal of a one-act comedy during a special drama block I had procured. In this case, it's - everyone wants to be on stage but they don't necessarily have the talent to be there. But, after many frustrating rehearsals, they finally pulled it off today so I went home exhausted but full of hope. Teenagers who lack acting talent make up for it with determination and humor.

Tell me about noise pollution! It's the bane of our filmmaking existence. They film in the woods - you still get the distant cry of kids from the playground. They film in my classroom - you can hear the thunder of basketballs in the gym. They filmed at the outdoor cafe at Starbuck's and we had to wait while an ambulance arrived, sirens on.
January 14, 2009 at 9:11 PM

Jason Bellamy said…
FilmDr: I know you must be exhausted, but thanks again for these terrific dispatches. As Hokahey said, if only this technology had been available when I was growing up and going to school. (In my case, I didn't miss it but too much. But enough.)

Anyway, I'm heartened to see the community so willing to jump in and support these projects. Yeah, it helps that people want to be in pictures. But, you know, it's also a sign of how people will bend over backward for one another if someone just asks nicely and shows appreciation.
January 15, 2009 at 8:14 AM

I find acting talent to be something very mysterious and intrinsic. Acting ability doesn't seem like something one can really teach. Some students have it, and it has something to do with emotional flexibility.

I still don't entirely know what everyone has been so helpful. It could have something to do with the reputation of the school. It often just seems like people are bored and like the idea of a camera crew to enliven their dull lives.
January 15, 2009 at 5:37 PM