1) "‘Does solving a problem by finding the right person and killing them ever work? Or does it create a self-perpetuating loop of violence?’ And that to me is not a theoretical, time-travel question. That’s a real-world question.” --Rian Johnson

3) I thoroughly enjoyed Looper, in part because I am a huge fan of Johnson's recent Knives Out and Brick (2005), watching Looper felt like returning to his early Dashiell Hammett-influenced noir sensibility that suits me exactly.

4) Rian Johnson's influences when making Looper: Casablanca (especially in the way Joe's moral compass shifts, as Rick's does, from being purely selfish to compassionate for others), T. S. Eliot's The Four Quartets (given the film's four movements), La Jetee, Brian De Palma's The Fury, Twelve Monkeys, Back to the Future, Witness (especially in the film's latter half), North by Northwest, (specifically the crop-dusting scene), some French New Wave films including Godard's Two or Three Things I Know About Her, and Terminator 2: Judgment Day.

5) "The most powerful form of time travel is memory. Every day ... we'll kind of go off in our heads and revisit moments in our lives, and wish that we had done them differently." And time travel stories can also be a warning, "the same way that Frankenstein stories are kind of a cautionary tale, sort of a 'yes, you think you want that, but it actually wouldn't help, it would actually make things worse' ... you think you want to revisit the past, but in reality you should just be living in the present." --Johnson

6) Take the off-repeated fundamental scene of the movie. Looper Joe Simmons (Joseph Gordon-Levitt) stands out in a field with his blunderbuss (a big gun) and waits by a tarp. Abruptly, a hooded man (and it is always a man) from the future appears on the tarp kneeling, whereupon Joe shoots him, and then rapidly disposes of the body in an incinerator. One can analyze this blunt scene as:

a) a cynical reflection of American foreign policy, especially in the way the man's hood is reminiscent of the atrocities of Abu Ghraib.

b) the final debasement of the iconic Hollywood cowboy and/or the hitman, with no need to aim, no flair, no razzle-dazzle gunplay. Joe might as well be in a slaughterhouse. The monotony of Joe's killing makes it so evocative, its everyday dreariness. 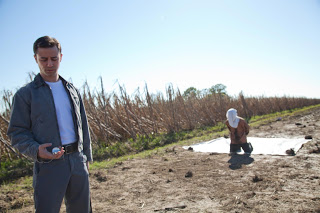 c) a variation on Nazi concentration camp techniques, with the incinerator substituted for the ovens.

d) a reminder of how future technological advances in surveillance and identification will make it nearly impossible to dispose of bodies, hence the need to send the victims back in time.

7) Most important, the looper lives under the constant existential threat of killing his thirty-year older self, a practice known as "closing the loop." The future crime syndicates like to clean up loose ends by having the loopers kill their older selves. Now, to return to Rian Johnson's quote about the significance of this movie: "Does solving a problem by finding the right person and killing them ever work? Or does it create a self-perpetuating loop of violence?" Given that the loopers often end up killing themselves, one can assume that Johnson meant for the viewer to note the reciprocity of the killer and victim, which reminded me of the 19th century German philosopher Arthur Schopenhauer and his all-encompassing theory of the will.

8) According to Schopenhauer, the will is the fundamental animus that drives man's existence and ensures his survival. Man's will guides him, forcing him to pursue whatever might satisfy it. Yet once sated, the will always finds a new object of desire, thus trapping man in a never-ending series of desires. The problem is, people suffer from the "principle of individuation," or the inability for them to see beyond their individual selves. Man cannot see that every other creature is a part of himself, a part of the will, so when he harms others, he harms himself, in effect "closing the loop."

9) As Schopenhauer wrote, "Deceived by the knowledge bound to its service, the will . . . fails to recognize itself; seeking enhanced well-being in one of its phenomena, it produces great suffering in another. Thus in the fierceness and intensity of its desire it buries its teeth in its own flesh, not knowing that it always injures only itself . . . Tormented and tormentor are one."

10) Through his repeated images of executions and through the encounter between the older (Bruce Willis) and the younger Joe in the diner (where the younger Gordon-Levitt version says "Why don't you do what old men do and die"), Johnson keeps returning to the blind, delusional nature of American violence, ironically in the midst of a smart, stylish, and pleasurably vicious science fiction film. As he says, "The thing that’s interesting to me is not `Would you go back in time and kill Hitler?' but `Would you go out and kill a man whose death would profit you right now?' And that’s something that is directly and morally applicable, unfortunately, to our times, and to being a human being." 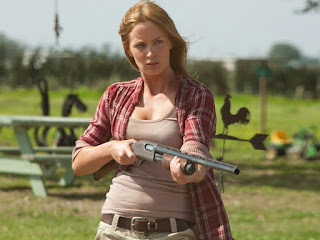