Judgment for the Sins of the Father: Paul Thomas Anderson's There Will Be Blood 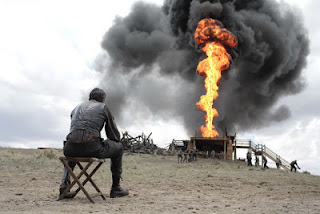 Wunderkind director Paul Thomas Anderson first gained notoriety with Boogie Nights (1997), a film about the 1970s porn industry, so I was struck by how his There Will Be Blood, depicts an opposite Victorian world of stringent strait-laced rigor. Loosely adapted from Upton Sinclair’s muck-raking 1927 novel Oil!, Anderson’s screenplay takes Sinclair’s central character, a genial and sentimental wildcat oil man, and turns him into a monster of capitalistic greed. Brilliantly played by Daniel Day Lewis, Daniel Plainview believes in making money for himself by drilling for oil--consequences be damned. We first see him in 1898 alone down in a desert hole chopping at rock with a pick-axe. He climbs out to set off a small explosion, and when he goes to retrieve his tools, a loose board in the ladder causes him to fall and break his leg down in the bottom of the well. So, he grimly climbs out and sets off across the wild west, crawling on his back for several miles before he finds someone to mend his leg.

Even as it hints at the tragic consequences of greed, I found the film oddly humorous as Plainview exploits everyone in the name of a good profit. When a young man shows up one day to lure Plainview to a small town in California where oil seeps out of the ground, Daniel goes to investigate, ostensibly quail hunting with his “son” H.W.  H.W. is actually the orphan son of a man killed in the midst of an earlier oil drilling, but Plainview likes to bring the boy along to make himself look more like a family man. Daniel finds the oil easily enough, and then rapidly buys up the land at what he calls “quail prices” before he starts to drill. To anyone who may complain about his taking over the town, Plainview replies that the oil will “blow gold all over the place,” so everyone goes along. During one evening, one of his workers dies when a large drill bit falls on his head. Looking annoyed, Plainview takes a break in town celebration to dispose of the dead. This scene sums up his attitude—people are expendable.

Soon enough, Plainview’s drilling business also damages his “son,” who sits too close to an oil gusher and thus loses his hearing. Plainview shows signs of perverse fatherly affection by attacking the local minister Eli Sunday (Paul Dano) for not curing the boy, but he doesn’t allow personal concerns to get in the way of his major goals. He will do anything, even lie about his soul to the local Church of the Third Revelation, to profit from the oil’s distribution by pipeline. While he likes the company of his “son,” and half-brother Henry Brands (Kevin J. O’Connor), Plainview distrusts these attachments, since he prefers to compete rather than get along. As for the obligations of a wife or mother, women hardly appear in the movie at all. One gets the impression that Plainview leads a barren lifestyle, free of any culture or softening influence, but his ferocity still holds one’s attention. When other oil executives come by to try to buy Plainview out, he replies “One night, I'm gonna come inside your house, wherever you're sleeping, and I'm gonna cut your throat.”

Ultimately, There Will Be Blood strives to diagnose the roots of the American psyche with its conmen, its religious frauds, and its oil barons. Even today, do Americans seem to care all that much about the destructive effects of our oil usage? Certainly Plainview makes no bones about it, so his honesty becomes oddly appealing. As he tells Henry Brands one evening, “I have a competition in me. I want no one else to succeed. I hate most people. I see nothing worth liking. I see the worst in people. I want to rule and never, ever explain myself.” While many other screenwriters rely on therapeutic plot contrivances where the main character learns to heal psychologically and see the error of his ways, Anderson keeps Plainview unrepentantly vindictive to his bitter end. And while the film can drag a little in the latter half, with a slightly contrived showdown between Plainview and Eli as a climax, There Will Be Blood also foreshadows the consequences of Americans rapaciously exploiting the earth for personal gain. Anderson tells his version of Sinclair’s story with a strong sense of Old Testament judgment. If Plainview happens to be a founding father of contemporary gas-guzzling America, God help us all.

---"'A Whole Ocean of Oil Under Our Feet': There Will Be Blood at 10" by Sean Fennessey

---A 2007 interview with Daniel Day Lewis and Paul Thomas Anderson

---studies of the film's cinematography script, and practical effects