"The Days of Free Speech May Soon End": The Necessary Urgency of Sarah Kendzior's Hiding in Plain Sight 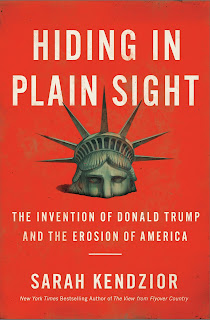 I received a copy of Sarah Kendzior's Hiding in Plain Sight as one book of seven in a big box recently from Amazon, and at the time, I thought that several of the other books such as Janelle Brown's new novel Pretty Things would prove more interesting. I generally tend to steer clear of reading anything about Donald Trump as a way to maintain my mental health, but I also have enjoyed reading Kendzior's often pleasantly bleak work on the internet, especially her post that was published right after Trump's election "We're heading into dark times. This is how to be your own light in the Age of Trump." The apocalyptic tone of that essay has quotes like: "You do not deserve what is going to happen to you, and I do not deserve what is going to happen to me, because there is absolutely no one in the world who deserves what may be coming." That still sounds a bit excessive, but, still pleasantly ominous. Kendzior also wrote: "The days of free speech may soon end." That was thought-provoking, an easy enough sentence to glide over because we take our freedoms for granted, but compelling enough to buy her book.

My initial assessment turned out to be totally wrong. Once I started reading Hiding in Plain Sight, I was mesmerized and instantly started underlining passages and noting the page numbers in a list on the blanker early pages. Specifically, I first started noting passages that brought up the word "hell," in part because I view works like Dante's Inferno as prophetic in oblique ways. For instance, the big pit landscape of the poem can resemble that of a modern day mining operation. Hiding in Plain Sight also strikes me as prophetic in its way, but ultimately, Kendzior focuses more on recent history as a good journalist should. Kendzior mentions Anna Politkovskaya's "2003 book A Small Corner of Hell, a compendium of her reporting in the war-torn region of Chechnya" (17). The next passage quotes Kendzior's friend Umar Lee: "You are going to see a hard move to the right, and a Nixon-style presidential candidate come out, only slicker, more of a demagogue, someone who can work the media, and we will be living in a new kind of hell. The people who vote for whoever it is, they'll be living in hell too, only they won't even know it" (37-8). Part of the judgment implied here lies in Kendzior's frustration with the lack of our ability to see what's going on. Why won't the American people wake up to face a grave threat to a freedom that they have long taken for granted? Is it because we can't imagine not being able to say what we think? Obversely, how much are we already censoring ourselves? This tension between normalcy bias and semi-acknowledged fear of reprisals characterizes this mental "hell" that Kendzior so effectively describes.

to be further revised and expanded when I get done grading this batch of essays . . .
Labels: Hiding in Plain Sight Sarah Kendzior