The Film Doctor's one sentence review of Back to the Future 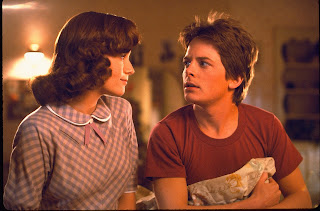 Why isn't the movie called Back to the Present (?), since Marty never does go into the future, even though, admittedly, Dr. Brown does late in the storyline as an afterthought; Robert Zemeckis could have called it Oedipus, the Skater Punk since the younger Lea Thompson as Marty's youthful mother steals the movie given her premature interest in her son and Crispin Glover as George McFly (Marty's dad) is simply astonishingly good as the consummate dork as Christopher Lloyd bugs out his eyes and points in various directions in his campy mad scientist fashion as the film hints of space operas coming true (why can't they become true?), and time travel really exists, whereas Marty's skateboard coasts to a stop, and his Nike tennis shoes kicks it into his hand, cool as you please, easy as a 1950s slice of apple pie eaten in your favorite diner.
Labels: Back to the Future Christopher Lloyd Crispin Glover Lea Thompson Robert Zemeckis