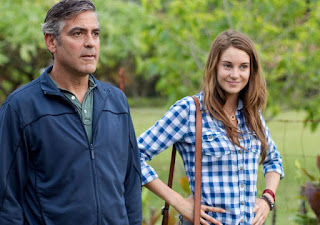 Q: So, basically you're saying that The Descendants is one of the best films of 2011, and that The Artist is implausible bunk.

A: Yes. The Artist would be better with sound.

Q: Why does The Descendants work so well?

A: With many scenes heightened with gentle Hawaiian guitar strumming on the soundtrack and glorious ocean sunset scenery, The Descendants could resemble a sentimental Lifetime movie, but instead the film handles death (or the imminent death of its main character Elizabeth King (Patricia Hastie) who is in a coma) rather well, in part because no one in the movie knows how to confront death at all. While everyone else thinks that she will recover from the head injury, Matt King (George Clooney) learns of her "permanent" or soon-to-die condition from her doctor first, and it becomes his responsibility to tell everyone else, especially his two daughters, Alexandra (Shailene Woodley), who is in college, and ten-year-old Scottie (Amara Miller).

Q: Yes, that does sound sentimental.

A: But the twist is that Matt learns that his wife was having an affair with a real estate agent before she went into the coma, so in his rage to figure out who the guy is, he turns his knowledge of his wife's imminent death into a weapon. When Alexandra tells him about it, he abruptly and spastically runs across his ritsy neighborhood and confronts his friends Kai and Mark, forcing them to tell him who she was sleeping with. When Kai initially balks at the idea, he tells her that his wife will die, and that she was "putting lipstick on a corpse" earlier during a hospital visit. The movie's unexpected switchbacks in tone between the humorous, the mournful, and the conniving (as Matt starts to spy on the agent) keeps the viewer off balance, therefore giving the movie an edge when it may seem merely elegiac.

Q: But who wants to see a depressing movie about death?

A: The Descendants also emphasizes how life and death has more in-between states with modern medical science. I heard somewhere that Patricia Hastie lost 20 pounds in the course of making the movie. Director Alexander Payne wields the sight of her becoming more and more emaciated on life support like a blunt stick. Characters arrive at the hospital to curse her out. Curiously, The Descendants succeeds emotionally in part because we don't know her at all.

Q: What about all of those glorious sunsets?

A: Payne sets up a nice ambiguity of the way others view Hawaii as an island paradise early on, since Matt says "F#*@ paradise" in the first voiceover. What good does the myth of Hawaii do him with his wife in a coma and his children running berserk? The movie keeps finding ways to make odd connections between the land and Matt's family (including his relationship with his ancestors). Early on, he says "Somehow it feels natural to find a daughter of mine on a different island. A family seems exactly like an archipelago - all part of the same geographic expression but still islands - separate and alone, always drifting slowly apart." It becomes Matt's responsibility to reunite his family as they all grieve over Elizabeth, and somehow it all ties in with his position as the main trustee over his family inheritance of 25,000 acres of prime untouched beachfront property. He and a bunch of cousins are getting ready to sell the land and make millions, but somehow that decision gets associated with his handling of the family crisis. 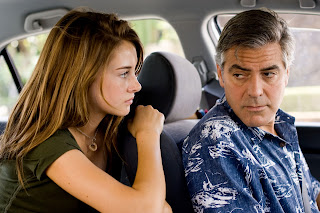 A: I'm not sure. At one point, he says "Soon my daughters and I can just be normal citizens like everybody else, and these dead people will stop controlling our lives," but he realizes that just as he has to watch out for his daughters after being the "default" parent for years, he also has to come to terms with his ancestors who entrusted him with this land. Payne makes this theme especially effective through his use of pictures of his great great great grandparents and other relatives on various walls (reminiscent of the way Hitchcock uses pictures in films like Psycho). Over the course of the movie, and as the pictures accumulate in different scenes, one realizes that we all become pictures on some descendant's wall (if we're lucky). The dead may control the living, but also the living can easily sell out the influence of the dead. Payne shows us multiple shots of various resorts and beaches, but the underlying bleak message is that we constantly compromise and exploit what's left of paradise.

Q: So, in reply to all of the critics who claim that Payne has "mellowed" since his Election period, you find that The Descendants is careful, nuanced, and yet still quite disquieting as it confronts death head on.

A: Yeah. The last deep focus shot is masterful in its use of mise en scene, bridging the three King family members under one blanket as they sit on the couch and watch, of all things, March of the Penguins out of frame. Are we supposed to be depressed to think that's all they're watching? You can count two other scenes that involve blankets that prepare us for this one. I've not even mentioned the way Payne alludes to Benjamin's freak-out scene underwater in the pool of The Graduate (1967) for Shailene Woodley's memorable moment of grief, and Clooney's astonishingly understated acting that at one point evokes Jean de Florette (1986) when he kneels down on his lawn as if beseeching the gods. Could it be that Payne actually alludes to Cary Grant in Hitchcock's Notorious (1946) when he films Clooney from the back of the head as the scene shifts in a match cut from outdoors to the hospital? (Scorsese includes an even more apt back-of-the-head match cut near the end of The Age of Innocence when Newland realizes that he's losing Ellen.) When we see Clooney lounging on his side on the beach, are we supposed to be reminded of Grant on the beach at Cannes in To Catch a Thief (1955)? Perhaps I'm reading too much into that.

Q: You probably are.

A: Shut up. All I'm saying is--observe the subtle way the film is built. Alexander Payne is an amazing director. 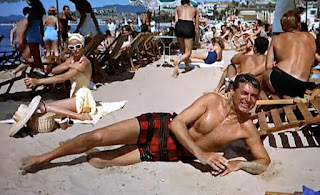