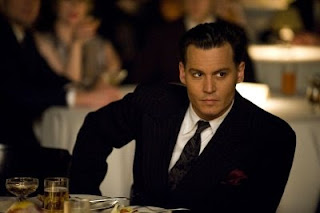 When it came to Public Enemies disappointing critics, perhaps the major problem was the lack of character development which can leave the film feeling, in David Denby's words, "emotionally neutered":

"In Bonnie and Clyde, we were clearly meant to warm up to the outlaws—not just to the two lovers but to the entire group, who became an extended, quarrelling family, and also folk heroes, in a Depression-era country both bored and broke. But Dillinger’s popularity is only hinted at in a couple of scenes, and Mann, as he did in Heat, divides his admiration evenly between criminals and cops. Both are risking everything. The movie is structured around repeated scenes of wounded men (agents as well as criminals) dying as they look into the eyes of their friends. Yet some of the dying men are barely known to us, and the device, though beautifully staged in each case, doesn’t have the power it should have had. The movie is emotionally neutered."

While I liked the movie more than Denby did, I could see his point, so I looked into Bryan Burrough's nonfiction book that inspired the film entitled Public Enemies: America's Greatest Crime Wave and the Birth of the FBI, 1933-34. I enjoyed the book very much, and one can learn more of Burrough's mostly positive thoughts about the movie adaptation in his article in Los Angeles Times. Reading the book does help one begin to decipher the pros and cons of Michael Mann's re-creation (he cowrote the movie with Ronan Bennett and Ann Biderman). Mann is extremely faithful to the details of place. Frequently whole scenes are accurate, but aspects of the larger arc of the story are not clear, and Mann makes major changes in the narrative to help balance the drama between John Dillinger and Melvin Purvis. 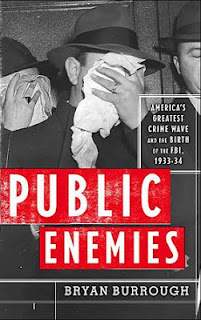 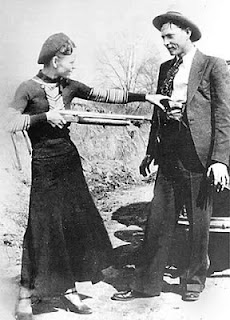 The title itself is misleading because Burrough focuses on the entire crime wave that encompasses the St. Paul Yeggs ("Yegg" is a term for bankrobber), Pretty Boy Floyd, the Barrow Gang, and others who do not get mentioned in the movie. In his scathing review of the film Public Enemies for Time, Richard Corliss wonders if the title refers not only to Dillinger, but also to FBI director John Edgar Hoover, but I would guess that Mann was being loyal to Bryan Burrough's title. The book itself has enough narrative for an entire mini-series, but there's really only one Public Enemy explored in much depth in the movie.

Bonnie and Clyde's exploits run roughly parallel to Dillinger's (they died a little earlier), but Burrough writes of the famous couple with disdain as unwashed, smelly, white trash gangsters who mostly robbed gas stations instead of banks. In one exploit, Clyde tried to imitate Dillinger's charm for the media, but, as Burrough puts it:

"[The 1967 movie version] has now done for Bonnie Parker and Clyde Barrow something they could never achieve in life: it has taken a shark-eyed multiple murderer and his deluded girlfriend and transformed them into sympathetic characters, imbuing them with a cuddly likeability they did not possess, and a cultural significance they do not deserve."

The Arthur Penn movie turns out to be mostly accurate in two scenes: the death of Buck Barrow and the final massacre of Bonnie and Clyde.

John Dillinger began his life of crime by mugging a local Mooresville, Indiana grocer and then serving nine years in jail, where he learned about robbing banks. In the film Public Enemies, Dillinger explains his background a little during an interview, but Mann mostly relies upon images of a row of Indiana prisoners marching in lockstep with their arms over each others' shoulders to convey a sense of the world that Dillinger wants to get away from. Mann basically just throws the viewer into the scene where Dillinger frees several friends/prisoners from a jail, a disorienting strategy he uses repeatedly in the film.

Also, early on, Mann introduces Melvin Purvis (Christian Bale) to the viewer as he expertly shoots Pretty Boy Floyd from a great distance across an apple orchard. According to the book, Purvis was one of several agents who shot at Floyd across a field, but that took place sometime after Dillinger's death. Even though he suffers some setbacks, Christian Bale's version of Purvis is generally much more successful than the one in the book. Public Enemies' setpiece scene out at the Little Bohemia lodge in Wisconsin was much more embarrassing for the real life FBI. Dillinger and his gang escaped the lodge in the first few seconds as Purvis and his men shot at a car, killing an innocent man inside. The actual raid was much more of a fiasco than it appears in the movie.

The film is most accurate when it comes to certain scenes. For instance, the courtroom scene where Dillinger's lawyer asks to have the shackles removed from the prisoner is pretty much word for word accurate. Mann skillfully depicts Dillinger's later Indiana jailbreak when he used a piece of wood as a gun (although Mann never explains it. He does, however, have a close-up of the makeshift gun so the audience can tell it's not real). Also, Mann neatly conveys a key scene from the real Dillinger's life as he jokes with the reporters inside the Lake County jail. Here, Dillinger shows off why he became the media darling of the early Depression crime wave, a man with "star quality." As a Daily News reporter put it at the time, "[Dillinger] rates in the eyes of calloused observers as the most amazing specimen of his kind ever seen outside of a wildly imaginative motion picture." In the movie, Mann gets this point across perfectly, with the added irony of Depp, a movie star, acting like a man who has just attained his own level of media stardom. From that interview with the press on, Dillinger had many Americans rooting for him as the charming underdog fighting the evil banks.

Whereas one of the most delightful scenes in the film has Dillinger stroll into the Chicago Bureau of Investigation--Dillinger Division once without anyone knowing who he is, the actual Dillinger did it four times. According to Burrough, as a kind of Robin Hood of the popular imagination, Dillinger could pop up anywhere, and he often made little myth-reinforcing symbolic gestures to random people, such as when he threw a blanket over a sick woman, or insisted that a bank customer keep his money in the midst of a robbery. Dillinger got to be so famous, he seemed hard to recognize as a result. One gas attendant "thought he recognized Dillinger but refrained from calling the local sheriff because he felt it couldn't be true." In part because of this, Dillinger kept eluding the FBI agents even as he went to baseball games, movies, and amusement parks.


7) Mann also does not explain Baby Face Nelson all that well. We gather that he was a psychopath when he impulsively shoots a policeman through a bank window during a robbery. In the book version, Nelson was prone to shooting people just for looking at him with a smile or for cutting him off in traffic. In the movie, he dies soon after the Little Bohemia raid, but in real life, he didn't get killed until after Dillinger's death. It makes sense that Mann has Nelson (Stephen Graham) imitating James Cagney. He was the unreliable hot head of the bunch.

When it came to Dillinger's death, Mann meticulously restored several blocks of Chicago to stage the scene in front of the Biograph theater. Even though Melvin Purvis did participate in the shooting, Hoover had already demoted him for his mistakes in Little Bohemia and elsewhere. While I think the movie's core emotion arises from the love affair between Billie Frechette (Marion Cotillard) and Dillinger, in reality Dillinger had moved on once Frechette was placed in jail. He was dating Polly Hamilton by that time, and she was his date that evening.

One thing you don't see in the movie: after Purvis and his men shot Dillinger on the sidewalk, and after his body was taken away, dozens of people dipped their handkerchiefs in his blood to take home to their families as souvenirs.

So, why did Mann leave so many questions in the movie unanswered? One can assume that he disliked the conventional ways of tying his story strands together. Instead, he takes many of the best scenes of the book and fashions a surprisingly raw experience. He immerses the viewer in a world where the genre is familiar, even if the actual circumstances are not, and lets the viewer piece together a coherence as he or she will. While Mann is interested in unifying the movie around a love affair, a milieu, and a central character, he's not inclined toward explanations. While this may leave Roger Ebert annoyed because of the film's lack of closure, I like the way Mann leaves in ambiguities that might more accurately reflect the gangster's speed-driven lifestyle and his need for self-creation in defiance of any provincial backstory. As Manohla Dargis wrote for The New York Times:

“Public Enemies doesn’t look like the usual gangster picture, not only because it’s been shot in digital, but also because Mr. Mann is searching for a new kind of gangster story to fit the times, one that makes room for greater ambivalence, and lawmen and outlaws who are closer to one another in temperament and deed. If he doesn’t fully succeed, it’s because he knows that the gangster’s rakish smile is at once a fiction of cinema and one of its great, irresistible lies."
Labels: Bryan Burrough Johnny Depp Manohla Dargis Michael Mann Public Enemies