"Turn Momma's Picture to the Wall": Notes on the Beginning of Hitchcock's Psycho (1960) 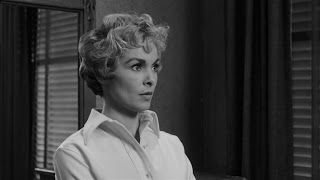 1. I love the masterfully cold, manipulative beginning of Psycho, written by Joseph Stefano, in part because it has little to do with the main story at the Bates Motel. The entire beginning is one long red herring designed to make the audience uneasy because they are invited to share in the paranoia of a singularly inept thief.

2. "Phoenix, Arizona, Friday December 11, 2:43 pm." Psycho opens with these words appearing on a straightforward shot of the Phoenix skyline before sneaking the viewer peeping tom-style inside the window of a cruddy hotel, where you can barely see a bathroom as the camera pans to Marion Crane (Janet Leigh) lying in her underwear on the bed as her boyfriend Sam (John Gavin) towers over her. Their respective positions foreshadow a design tendency in the film to have one thing tower over another thing that lies supine, such as the way the Addams family Gothic home of Norman Bates looms over the flat motel.

3. Sam says the first line--"Never did eat your lunch, did you?" as we see a rapid insert shot of a sandwich on a table. In this fashion, Hitchcock immediately associates eating with sex and excretion (the bathroom). Marion has no need for lunch because she's satisfied her "ugly appetite" (to quote Norman's mother) another way. All of this and an upcoming shower scene make the normally innocent bathroom a chamber of existential dread. Much of the rest of the dialogue is exposition, but I like the way Sam says "Turn momma's picture to the wall?" as a way to characterize what fun they would have after an evening of respectable dining. Hitchcock loves to rely on photographs, paintings, stuffed birds, mirrors, and anything else on the walls to convey significant mise-en-scene. He even did that in his television show Alfred Hitchcock Presents.

4. It appears that the cheerful eroticism of this scene is the last one in the movie. From hereon, things get weird.

5. Hitchcock used his television crew to help film Psycho, and the anonymous 1950s bland set design of the film as well as its black and white cinematography give it a blunt grungy appeal. The interiors look so pitiful, middle-American, and desperate, why wouldn't one resort to murder?

6. Marion then shows up at what seems to be a real estate firm. We first see Hitchcock himself standing outside in the heat for his trademark cameo. By this point in his career, he had to appear early in the film or audiences would be too distracted looking for him to pay attention to the movie.

7. As Marion walks in, she passes two paintings, one showing a water scene like a lake, the other a desert landscape behind her desk. I've never entirely understood why they are there--perhaps to show her need to escape for the "desert" of her current life by stealing money? Of course, later on she will end up in the trunk of her car in a swamp, so perhaps that's the implication of the water scene.

8. I like the way Hitchcock has his daughter Pat play Caroline, Marion's fellow secretary. She also brings up a mother figure. When head achey Marion asks about aspirin, Caroline says she has something else: "My mother's doctor gave them to me on the day of my wedding. Teddy was furious when he found out I'd taken tranquilizers." Aside from the omnipresent influence of two mothers now, why on earth would Caroline talk about being drugged on her honeymoon? Already, the sweet romantic tone of the opening scene has started to change into something more ominous.

9. To go along with this shift, Frank Albertson appears as oil man Tom Cassidy, who lamely tries to use his money ($40,000) as an excuse to flirt with Marion. Of all of the manifestations of the male gaze, Tom is the most overtly lecherous. For the next several scenes, Marion will be looked at as a possible "wrong one" or criminal instead.

10. Then, once Marion goes home with the money instead of properly placing it in a safety deposit box in the bank, the scene cuts to a skillful nonverbal expository shot where Hitchcock frames Marion (now wearing black underwear, as befits her new status as thief), and then the money in a white envelope (handy for making a dominant contrast in a shot). Then the camera frames her open suitcase, and then back to her getting dressed, wherein we can see a shower head and part of a bathroom behind her head. As he does with the opening scene of Rear Window, Hitchcock uses a camera moving carefully around a room to let the audience figure out what is going on.

11. Implicated in her guilt, the audience now feels concern over Marion as she drives out of town. She looks slightly freaked, but Hitchcock distracts the viewer with a voiceover in which she imagines Sam talking about meeting her in Fairvale. Sam says, "Marion, what in the world? What are you doing up here? Of course I'm glad to see you. I always am. What is it, Marion?" With Sam's voice getting lower and more intimate, the viewer gets caught up in this fictional half of a discussion when Hitchcock performs a maneuvre like a magician drawing your attention to one hand while the second hides a coin. He cuts to a point of view shot of her looking out of the car. And then, there's her boss walking by and nodding at her absentmindedly. He then stops and stares at her, realizing that she hasn't gone home as she said she would, before walking on. With the viewer fully locked in to her perspective, Marion's guilt and paranoia are just beginning. 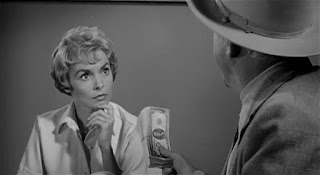