"The Logical Extension of Business is Murder": Cosmopolis 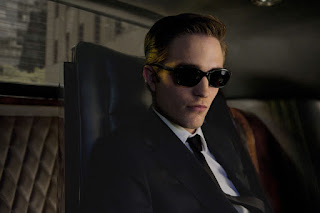 "If you have a strange sensation while watching Cosmopolis, a dreadful remove, it's because you are experiencing the end of the world as theory." --Daniel Kasman

"I think David [Cronenberg] liked the takes when I had literally no idea what I was doing.” --Robert Pattinson

"Eric’s in-dwelling in the super-rarefied world of abstract finance gives him the illusion that the material realm is irrelevant, archaic." --Cornel Bonca

"Eric Packer’s world, the world of digitization and cyber-capital, transcends linguistic representation. DeLillo facilitates this point through Packer’s running commentary on language. `The cool universe of digitality has absorbed the world of metaphor and metonymy' (Baudrillard 188). Language, according to the protagonist, is currently incapable and utterly inappropriate for expressing the current situation, which is marked by simulation, hyper-reality, and ever-increasing speeds of change." --Stuart Noble

"He looked past Chin toward streams of numbers running in opposite directions. He understood how much it meant to him, the roll and flip of data on a screen. He studied the figural diagrams that brought organic patterns into play, birdwing and chambered shell. It was shallow thinking to maintain that numbers and charts were the cold compression of unruly human energies, every sort of yearning and midnight sweat reduced to lucid units in the financial markets. In fact data itself was soulful and glowing, a dynamic aspect of the life process. This was the eloquence of alphabets and numeric systems, now fully realized in electronic form, in the zero-oneness of the world, the digital imperative that defined every breath of the planet's living billions. Here was the heave of the biosphere. Our bodies and oceans were here, knowable and whole." --from DeLillo's novel

"The visual style of the movie comes from the dialogue. It wouldn’t exist if the dialogue wasn’t there or there was less of it, or if the dialogue was more, in quotes, realistic, or whatever those critics are thinking. There was one critic who said `The dialogue is making me think kill me, kill me now, I can’t take any more of this,' and I thought, `Yes, I’d be happy to kill you now, no problem.'”

"[Edouard Carmignac] felt that it [Cosmopolis] was absolutely accurate, that he works with people who are exactly like Eric Packer in terms of their abstraction. They live in this weird bubble where they are disconnected even from the way that normal people buy things and sell things, let alone from basic social interactions with normal human beings." --David Cronenberg

"I write as I can in the rhythm of interminable weeks
monday: empty storehouses a rat became the unit of currency
tuesday: the mayor murdered by unknown assailants
wednesday: negotiations for a cease-fire the enemy has imprisoned our messengers
we don't know where they are held that is the place of torture
thursday: after a stormy meeting a majority of voices rejected the motion of the spice merchants for unconditional surrender
friday: the beginning of the plague saturday: our invincible defender
N.N. committed suicide sunday: no more water we drove back
an attack at the eastern gate called the Gate of the Alliance

Cosmopolis’s grimness — and it is hell-dark, a near Miltonic vision of greed, chaos, and soul-squandering — is, it turns out, an altogether apt reflection of its theme, which is the remorseless momentum of post-Berlin Wall capitalism, of a New World Order that has no symmetrical foe aside from “terrorism” and which is wedded inexorably to technologies of such seamless, speed-of-light efficiency that it promises the very transcendence of the physical, an escape from mortality itself into the dream-realm of the cybernetic. As Eric Packer, Cosmopolis’s dread anti-hero, would have it: `He’d always wanted to be quantum dust, transcending his body mass, the soft tissue over the bones, the muscle and fat. The idea was to live outside the given limits, in a chip, on a disk, as data, in whirl, in radiant spin, a consciousness saved from void.'" --Cornel Bonca

"Where do these limos go at night?" --Eric Packer

"Where do the ducks go in the winter?" --Holden Caulfield in J. D Salinger The Catcher in the Rye (1951)

“Computer power eliminates doubt. All doubt rises from past experience. But the past is disappearing. We used to know the past but not the future. This is changing. . . . Time is a corporate asset now. It belongs to the free market system."--Vija Kinski (Samantha Morton)

"The subjects of the talks, as well as the mise-en-scène in general, principally dances around the severe abstraction late capitalism has introduced into life—or, at least, into the life of a very rich man, where numbers and screens, his head of security's warnings about threats to his life, and, ultimately, the unrest that percolates through New York as the film goes on, all remains at a distant, intangible remove. The world is reduced to virtual communication and personal relationships to theory, each talk . . . an intellectual negotiation for the purpose of cerebral play." --Daniel Kasman

"My prostate is asymmetrical."
"What does that mean?"
"I don't know." --Eric Packer talking with his wife Elise (Sarah Gadon)

"A specter is haunting the world, the specter of capitalism." --a red LED ticker display

"The logical extension of business is murder." --Eric Packer

From DeLillo's novel: "The speed is the point. Never mind the urgent and endless replenishment, the way data dissolves at one end of the series just as it takes shape at the other. This is the point, the thrust, the future. We are not witnessing the flow of information so much as pure spectacle, or information made sacred, ritually unreadable."