27 Dresses and the inbred formulae of romantic comedies 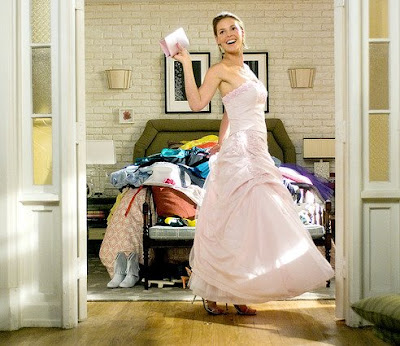 Romantic comedy formulae seem simple: show lots of weddings, show even more weddings, leave the heroine of 27 Dresses, in this case, Jane (Katherine Heigl) sad and lonesome because her ditsier blonder sister Tess (Malin Ackerman) has nabbed the man that Jane is secretly in love with, who also happens to be her boss, George (Edward Burns). Show a montage of wedding scenes. Cut to gleaming night shots of the with almost obsessive repetition even though most of the film was shot in . Show even more weddings, since Jane likes to help others have successful weddings (even to the point of holding the bride’s dress as she urinates) while she always remains a bridesmaid. To prove this point, Jane keeps 27 goofy-looking bridesmaid’s dresses that range from Gone with the Wind southern style to Gothic punk. Then, of course, the right man, in this case a newspaper journalist named Kevin (James Marsden) accidentally happens upon Jane’s filofax and decides to write a story about her for his wedding columns. The fact that Kevin works for The New York Journal is quaint enough, considering the near-death of the newspaper industry these days, but his role helps vaguely tie in the film with the newspaper films of the 1940s, notably It Happened One Night (which also concerns a journalist falling in love with the subject of his story) and Philadelphia Story.

In its deliberately conventional way, 27 Dresses is well made, I think in part because the writer of The Devil Wears Prada, Aline Brosh McKenna wrote this film, and because director Anne Fletcher does a skillful job. The actors uniformly prove equal to the task of fulfilling their roles, and I didn’t know their faces too well, which made viewing them relatively fresh. But 27 Dresses can be extreme in its derivativeness. At times, Aline Brosh McKenna lifts like crazy from other films. For instance, the hyper-efficient hard-working please-everyone-else Jane finally loses control of her car one rainy evening with Kevin and skids off the road. Kevin guides her to a bar, where they get drunk, and soon they find themselves singing Elton John’s “Bennie and the Jets” over and over. They eventually sing standing on the bar before a cheering crowd of revelers, before they go sleep together back in the car. This moment of joyful release takes the same rock and roll artist of a similar sing along-scene on a bus in Almost Famous, only in that film the song is “Tiny Dancer” and their singing together reunites the band. The “Bennie and the Jets” moment also resembles another singing-in-public scene of “I Say a Little Prayer” by Dionne Warwick in My Best Friend’s Wedding, a film that also shares much in terms of its plot with 27 Dresses.

Curiously, when it comes time for Jane to proclaim her love to Kevin, she does it by jumping on to a night-lit wedding boat full of strangers (What other films involve a big leap of faith as part of character development?). Even though the boat isn’t that big, and she could probably easily find Kevin on her own, she commandeers the PA system and announces her love to everyone, whereupon Kevin appears and they get together. The scene leaves open the question—why did she feel obliged to make her love public? Then, I realized that this tendency to ramp up emotional scenes by allowing others to participate occurs quite frequently in the film, such as when Jane and Kevin dance on the bar. That stunt makes them local celebrities in the small town, as they discover the next morning. Kevin’s story about Jane being a perpetual bridesmaid comes out with bad timing, making her hate him temporarily, but it also turns her into a celebrity. When it comes time to wreak revenge on her sister Tess for stealing away her dream man, Jane chooses to present a vicious slide presentation outlining Tess’s flaws during a pre-wedding get-together with all of their friends and family. All of this behavior leaves the question—why does Jane compulsively seek an audience for her protestations of her feelings? Did Aline Brosh McKenna choose to convey these scenes this way so that their public nature gives the feelings more impact, or does the movie basically acknowledge how romantic comedies are all about the audience sharing in love and heartbreak vicariously, so why not make it overt on the screen?

So, even as I enjoyed Jane’s gradual realization that she needs to live her own life and no longer be a helpful bridesmaid to others, I was stunned by the inbred conventions of the film and its willingness to hype its emotions to multiple audiences. And if all else fails, the filmmakers know to show another wedding.

Julia said…
I found the the over the top emoting in this film just plain embarrassing. Your take on the subject of the movie's tendency to ramp up emotional scenes was right on. Good review.
June 21, 2008 at 11:53 AM

BeaufortBay said…
I think I like something like Knocked Up better than just another wretched wedding movie because it at least makes fun of the genre by punching holes in its conventions. And the Weddings and Funerals movie at least has a gay guy in the middle of the wedding, and Mr. Bean saying "God the Father, God the Son, and God the Holy Spigot" (or am I in the wrong movie?). And Mr. Darcy is a villainous looking potential rich husband at first. And Rhett eventually can't stand Scarlett, who remains in love with that namby-pamby sop Ashley. I have no intention of going to any wedding movie any time soon.
June 21, 2008 at 9:26 PM

The Film Doctor said…
The emphasis on weddings in romantic comedies show the importance of tradition and ritual. Insofar as the conventions are so narrow, romantic comedies tend to get more bizarrely ritualistic all the time.
June 22, 2008 at 8:41 PM