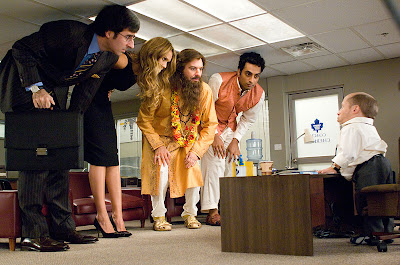 Many summer blockbusters leave the impression of a large complicated hangar with much frenetic motion, fuzzy CGI, and a hollow space in the middle, but now that The Love Guru has sunk to a 15% approval rating on Rotten Tomatoes within 5 days of its release, and people are bashing it gleefully, I would just like to know what was going on in Myer’s head when he wrote this?

For starters, he needed a new persona. There were signs of Austin Powers wearing thin, especially when Myers created Goldmember, a static Swede character given to pulling scabs off his skin and eating them when he wasn’t rollerskate-boogieing like an extra in Xanadu. Some say things went wrong with the public dislike of The Cat in the Hat (2003). Of that vulgarization of Dr. Seuss' classic book, critic Mahnola Dargis wrote

"So all we could do was to

Not one little bit."

At any rate, Myers settled on a wafer-thin five minute sketch figure of a mock guru and, like summoning an aircraft carrier from a rubber ducky, built an entire would-be blockbuster around it. His Pitka resembles the Beatles’ Maharishi Mahesh Yogi, the nominal subject of their song “Sexy Sadie.” The Beatles sought Yogi’s counsel for a period of time, and wrote much of the White Album while visiting with him in . Eventually, I think John especially grew disenchanted with the guy, even though the Beatles continued to use the sitar in their songs.

Curiously, Myers does take Indian mysticism seriously, and that may be his big mistake. He is good friends with Deepak Chopra, and he inserts into The Love Guru semi-serious spiritual (?) lessons (mostly done on PowerPoint) with the testicle/penis/diarrhea/midget jokes that comprise his stock in trade. Myers simultaneously mocks the look of a Hindu holy wise man even as he peddles a series of self-help mini Sutras and phrases like "nowhere=now here," and DRAMA (as written on his hand like Love and Hate on Robert Mitchum’s knuckles in The Night of the Hunter). DRAMA stands for “Distraction, Regression, Adjustment, Maturation and Action.” I wonder if he thought of all that on his own or lifted some of it from some real guru?

To fit his theories, Myers concocted a throwaway screenplay about a professional hockey player Darren Roanoke (played by Romany Malco) who needs to confront his controlling mother so that he can win against the well-endowed Jacques Le Coq Grande (Justin Timberlake), the goalie for the enemy team. Jacques had managed to steal away Darren’s wife (Meagan Good), so now Darren gets the shakes when he should be scoring goals. It is up to Guru Pitka to counsel and heal Darren by learning to embrace his childlike side. Myers makes sure that everyone has proper motivation: in order to beat his rival Deepak Chopra, Pitka wants to appear on Oprah (treated like a deity of the film), and Oprah won’t allow him on unless he cures Darren.

Moreover, Jessica Alba plays the thankless love interest who also happens to be the owner of the Maple Leafs hockey team. Arguably, her biggest role is still the cowboy stripper in . Now, after such painful duds such as Awake and The Eye, she might have hoped to outdo Heather Graham of The Spy Who Shagged Me, and what does she get? Pitka admiring her “great rack” and inviting her to sit down with him to eat “nuts in a sling” for dinner. The dinner scene seemed the most telling: Alba barely chuckles politely at his testicles-dipped-in- warm-grease jokes before saying “I haven’t laughed like this in a long time.” She’s game enough, and she dances and sings well in the only good scenes in the film—the Bollywood musical numbers--but Heather Graham got to fight Dr. Evil.

Since The Love Guru has very little action aside from the conventional hockey sequences and one scene where Pitka is assaulted by a rooster, everyone mostly stands around as Myers perpetually mugs and smiles at the camera. When his stunt double jumps off of an elephant out of frame and then Myers appears, winking at the audience, he’s saying “Hey kids! I know you caught that cheap special effect.” I guess that he imagines that he’s yukking it up with the naughty PG-13 jokes for the youngsters. He likes to place things on his face, a plastic shield for his beard in the shower, dismembered rooster body parts, and cotton candy, but underneath it all he’s peddling another dreary LA exhortation to “love yourself” and allow yourself to be vulnerable, much as in the equally sophomoric/therapeutic Get Smart.

Basically, comedy is difficult and it thrives on cruelty. Living detached from the world in his wealth, Myers constrained his comic gifts in the name of mystical love, but you cannot mock and preach at the same time. It just makes you a didactic schizophrenic. As Austin Powers, Myers could be unrepentantly lecherous, but as Pitka there’s always that holy aura neutering him in advance, hence, perhaps, the film’s obsession with virility. At one point he tells Alba “There’s no such thing as failure, just early attempts at success.” Not with this movie.
Labels: comedy Jessica Alba Mike Myers The Love Guru