Big, green, and puffy: the aesthetic contradictions of The Incredible Hulk 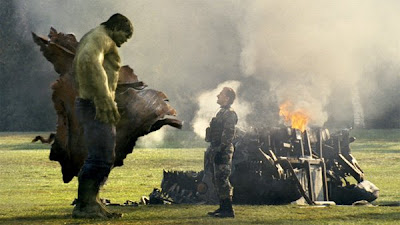 Why, oh why, do these Marvel films like The Incredible Hulk always boil down to two Rock ‘em Sock ‘em gargantuan lunks throwing around cars and grunting things like “Give me a real fight!” and “You don’t deserve this power!” In 2099, people will look back at this time and wonder how is it that so many skilled professionals worked to make such puerile adolescent fantasies. Ever since Spiderman 2, the template for every superhero film since, the actors get better, the CGI visuals get more convincing, and yet the third acts remain so dumb.

The first half of The Incredible Hulk impressed me with its sharp cinematography by Peter Menzies Jr., and the early scenes wherein Bruce Banner (Edward Norton) hides out in the slums of have a compelling visual density. The Universal studio executives were smart to hire on the Parisian director of the Transporter series, Louis Leterrier to direct this film, because he brings both an excellent graphic sense and an ability to depict deft action scenes. Since Banner must continually evade General Thaddeus Ross (a cheerful William Hurt) who wants exploit Banner’s Hulk side for military purposes, much of the film has one chase scene after another, and Leterrier’s use of the slums as a backdrop recalls Paul Greengrass’s use of the crowded streets of Tangiers in The Bourne Ultimatum (which also carries a similar refugee on the run theme). For his part, Edward Norton spends much of the film looking depressed. He didn’t ask for this existential quandary—cut off from his love interest Betty Ross (Liv Tyler) and always subject at any time to have his id explode into giant green rage. In fact, Banner takes lessons in trying to control his anger and his pulse through deep breathing, but naturally once the General and his special-op soldier Emil Blonsky (Tim Roth) track him down to a bottling factory, Banner changes as we knew he would, goes on a rampage, and eventually ends up by a mountain stream in Guatemala with nothing on except stretched shorts. Banner then has to beg to survive as he works his way back to the states, and I was impressed by how the filmmakers improved on the Spiderman narrative formula by making Banner not only sad but wan and destitute. Somehow, superhero films work best when the failure of the regular Joe stands in inverse ratio to the success of his superhero manifestation.

Once back in the states, Banner actually delivers pizza at one point (another Spiderman reference) before bumping into his long lost love Dr. Elizabeth Ross. Leterrier skillfully conveys their hopeless love for one another, since she is, awkwardly enough, the daughter of General Ross. At times, especially after the Hulk shelters her from a fireball by holding her in his big green arms, she seems to prefer his more muscular green side. In contrast to Lou Ferrigno’s version of the hulk on the TV show, this puffy CGI Hulk is markedly handsomer than Ed Norton, with a more youthful face and better black hair, so one can’t blame Betty too much. They have a King Kong moment together by some cave durng a rainstorm, where for a moment Hulk rages King Lear-like at the elements. Later, once Banner returns, she asks him about how much he’s conscious of what’s going on when large and green. He answers vaguely when I was hoping he would say “It’s my id, frankly, and we’re living out a bizarre Freudian psychodrama with your dad,” but no such luck.

Ultimately, the more we get to know Mr. Hulk, the more lunkish he appears, and the more clumsy the movie gets. Like one of those rubberized dolls or a figure made of Play Doh, the Hulk does not seem to have any bone structure. The more the film relies on computer-generated fight scenes, the more he reminded me of a well-built Pillsbury Dough Boy from Ghost Busters, too plushy to feel much pain. With all of the combined acting and directing talent on display, it’s bizarre to see, just as in Iron Man, how all ambiguities are resolved by yet another elaborate World Wrestling bout between good and evil.