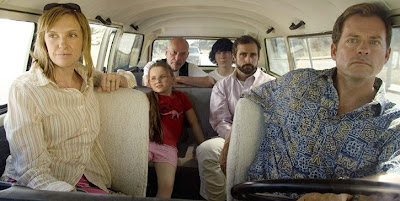 “Please don’t kill yourself tonight,” writes Duane to his uncle Frank after he has moved into his sister’s house early on in Little Miss Sunshine. Frank (Steve Carell) has just attempted suicide after finding his love for a male graduate student unrequited, so now he’s obliged to live with his sister’s highly dysfunctional family, and everyone’s way too preoccupied with his or her problems to adequately attend to Frank’s sorrows. When his sister Sheryl (Toni Collette) says she’s so happy he’s still alive, he says “That makes one of us,” and continues to stare remorsefully into the distance.

Given that modern-day American families are plagued by the threat of poverty, despair, divorce, professional failure, rising gas prices, obesity, rat-race competition, and deadbeat, self-involved baby boomer grandparents returning to the nest, one would think moviemakers could craft a good tragedy with these themes, but not a road movie comedy. Why would anyone want to see five eccentric characters fighting their away across the Southwest in a yellow VW bus just so the nine year old daughter Olive (Abigail Breslin) can attend a grotesque JonBenet Ramsey-esque children’s beauty pageant? And yet, the film succeeds surprisingly well mostly due to an excellent cast and a witty original script that keeps using humor to avoid sentimental meltdown.

Made on a shoestring budget by a husband and wife team of directors (Jonathan Dayton and Valerie Faris) over a five year period, Little Miss Sunshine might not have made it into theaters at all except for its enthusiastic reception at the 2006 Sundance Film Festival, which persuaded Fox Searchlight studios to distribute the film. There’s very little obvious commercial appeal here. No glamorous main star anchors the production, although Steve Carell’s career took off with The 40 Year Old Virgin as this film was still mired in development. For a mainstream release, the movie is a deliberately ugly duckling. As the mother, Toni Collette mostly looks harassed. Alan Arkin enjoys himself as the unrepentant hippie granddad who routinely curses and snorts heroin (a role he will later win an Oscar for). He’s an entertainingly awful old coot, only living at home because he was kicked out of the retirement community, but it takes one a moment to realize that he’s also chiefly responsible for nurturing his granddaughter’s dreams of winning a beauty pageant. Greg Kinnear plays Richard, the most obnoxious family member due to his belief in his nine point system that “awakens and unleashes” the winner within. Richard cannot have a conversation at all without resorting to passive aggressive inspirational psycho-babble. In revolt against the whole family, his teenage stepson Dwayne (Paul Dano) has stopped speaking altogether, so he looks on glumly as his family argues over their cheap fried chicken dinner. At one point, he writes a note to Frank that says “Welcome to hell.”

Most importantly, tiny Abigail Breslin, who plays young Olive with large glasses and red cowboy boots, is not your typical beauty queen material. In her desire to become a star of the kiddie pageant world, Olive provides the emotional center of the film. Under her near-sighted gaze, the rest of the family becomes more self-aware of their selfishness. By getting them out of their heads and onto the road, she gives them a goal to strive for, even as proves a delusory promised land.

Ironically, given its saccharine title, Little Miss Sunshine concerns the everyday despair of anyone who attempts to achieve anything amidst the traffic jams, convenience stores, and Budget Inns—all the junk culture that surrounds us. But just by acknowledging many of the pressures of modern life that other movies tend to leave out, this film has more impact in a bitingly funny way than many of the glossier fantasies coming out of .