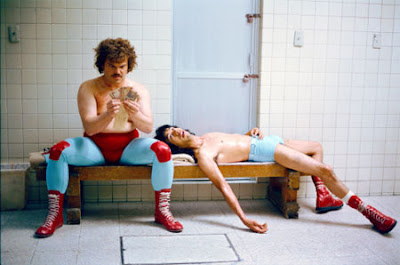 South of the border, in the little town of Oaxaca, a pudgy young friar working as a cook dreams of becoming a Luchadore wrestler, in part to help a bunch of orphans eat decent food, and in part to impress a hot nun named Sister Encarnacion (Ana de la Reguera) who resembles a chaste Selma Hayek. Such is the premise of Nacho Libre, a vanity project for Jack Black who seems intent on squandering some the good will he has earned from starring in the infinitely superior King Kong and the decent .

There could have been a good movie here, but the story is underwritten and Black brought on board the young maker of Napoleon Dynamite Jared Hess to direct. Perhaps bullied by picture studio expectations of a summer blockbuster, Hess seems out of his depth, or perhaps just not culturally in tune with the material. Napoleon Dynamite earned cult status by exploring Hess’s secretly Mormon world of a nerd. In the film, Napoleon likes to tie a string to an action figure and then drag it behind the school bus. He also likes to play tetherball. By eventually mastering a dance sequence and bravely performing it before the high school body, Napoleon somehow manages to transmute his stubbornly geeky way into a new kind of hipness, and a cultural icon was born. Obviously, Jack Black thought that Hess might work some similar alchemy on location in , but he was mistaken.

Nacho Libre does have Black’s comic talent and an unorthodox visual flair. Hess likes to place Black and the other Mexican no-name actors directly in the middle of the frame, making the film openly confrontational with its grotesque visions of masked cartoonish fighters. The lucha libre (freestyle) Mexican wrestling world, adopted from its American counterpart, is given to a wild mix of fighting dwarves, old women, and wrestlers jumping high off the ropes of the ring into the crowd. The Mexicans adapted the form to suit their mythological need for battles and glamour, but Nacho Libre exploits their world for easy scatological humor. Without many signs of respect for the Mexican culture, the film seems to just use the country’s heritage as a backdrop for yet another story of redemption through fighting that ultimately glorifies the goofball lead character, a kind of Taco Bell Rocky. When Hess isn’t just using Mexican extras for sight-gags (he was particularly enthralled with one old man with wall eyes), he barely sketches in other characters. Nacho’s sidekick Esqueleto (Hector Jimenez) introduces himself by jumping over a wall to steal Nacho’s Nacho chips. Esqueleto’s thinness contrasts nicely with Black’s paunch, making them a kind of updated Laurel and Hardy, but they don’t have much to say to each other. We see them running around the fields and smearing cow manure on each other to train for their first fight. Then as Nacho and Esqueleto start to lose one wrestling matches, they learn that they still make money, so Nacho makes some decent salads for his orphans and his favorite nun.

Since there was never any reason to get caught up in this storyline, I did not. Nacho develops some kind of Jesus-complex and wanders off to the wilderness to meditate. Sister Encarnacion continues to look beautiful and blank, a static erotic icon. Various gaps in the film’s coherence leaves Jack Black mugging for the camera. Even with the best intentions, Nacho Libre shows why comedy is considered the hardest genre to do well. In his red tights and sky blue mask, Black looks like a superhero’s pudgy younger brother. As apt as that image may be, it still ages fast under the hot Mexican sun.