The Noble Killer: Mark Walhberg in The Shooter 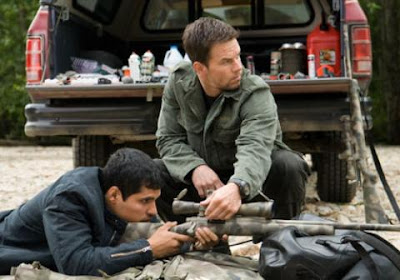 Up on an Ethiopian cliff, two Marines sit behind a very big gun as they wait to take out some enemy forces way down below. In grassy camouflage that makes him look like a shaggy dog, Mark Wahlberg plays Bob Lee Swagger, scout sniper extraordinaire in The Shooter, Paramount Studio’s adaptation of Stephen Hunter’s novel Point of Impact, a generic Tom Clancyesque best-seller.

While The Shooter delivers the kind of intrigue and explosions that one might expect from an unoriginal military-suspense thriller, the movie ends up being both moderately intelligent and astonishingly stupid, moving from one to the other as the film goes on. Soon after Bob loses his partner in a surprise helicopter attack, he retires from the force so he can live up on top of a mountain with his trusty dog who gets a bottle of Budweiser out of the refrigerator for his master. There, Bob could have spent the rest of his life shooting bottles for fun, but unfortunately Colonel Isaac Johnson (Danny Glover) arrives with members of his evil US government cabal to persuade Bob to prevent the assassination of the president. Understandably, Bob points out that he doesn’t like the president much, but Johnson appeals to his patriotism to at least go scope out where someone could, from a mile away, shoot our nation’s leader as he gives a speech in Philadelphia.

As Bob goes out to investigate, one learns all kinds of interesting things as macho Wahlberg mutters his lines under his breath. To shoot someone from the distance of a mile, you have to take into consideration the humidity, the wind, the curvature of the earth, even the gnats that might get in the way. Just when president arrives to give his speech, a cop shoots Bob, knocking him out of a window, and soon enough Bob finds himself falsely accused of murder and running from the FBI. For awhile, it’s entertaining to see the various ways in which Bob keeps himself alive and free from a nationwide manhunt by hanging on to the side of a barge as it coasts up a river or by buying sugar, salt, a water bottle, and a syringe so that he can replenish his lost blood. He eventually makes it over to Sarah, his former partner’s widow, so she can nurse him back to health (also so female viewers can see Wahlberg without his shirt on), and that’s exactly where the movie starts to go downhill.

Sarah, as played by doe-eyed Kate Mara, distrusts Bob at first, but then she becomes his loyal sidekick as he investigate just who is behind this government double-cross. As he says in his low, barely audible, brooding voice, “I’m gonna burn their playhouse down,” so he enlists the help of FBI man Nick Memphis (Michael Pena) in tracking down the various villains. As Bob and Nick take out about 100 soldiers on a farm with napalm and all kinds of sophisticated firepower, one of the bad guys kidnaps Sarah so that she can appear in her bra screaming for help. This villain likes to lean into her neck and mutter evil things in her ear to the point where I thought he might tie her to railroad tracks and start to twirl his mustache.

The film devolves into three or four conclusions where high-level government officials make ominous remarks like “The bosses knew what was happening in Abu Ghraib” and “Nothing ever happens without the approval of the government.” As one disgusted US Senator says, “Every now and again you get some man who thinks he can make a difference. You have to kill him to make him think otherwise. That’s the hassle with democracy.” Danny Glover turns to snarling lines like “I won. You lost” until one can almost believe that, given the corruption and venality of all those who hold power, killing can be a noble enterprise. The film desperately searches for a way to finish, without much success. Regardless, Bob Lee Swagger never lacks for a reason to shoot his gun.