Music and Lyrics: Hugh Grant tries to be endearing again 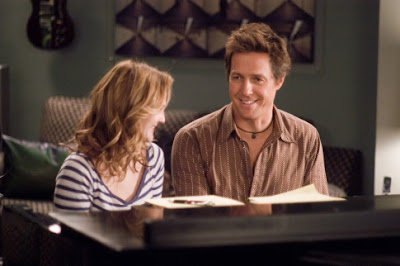 Hugh Grant earned his stardom in such 1990s and early 2000s films such as Four Weddings and a Funeral and Bridget Jones’s Diary, but much of his act depended on youthful charm, so now in his later 40s his acting has become a mass of winsome tics. His self-deprecating smile, Paul McCartney crinkly eyes, and British stutter has begun to parody itself, and he hasn’t helped matters any by choosing rusty romantic comedy vehicles like Music and Lyrics where he plays a washed up eighties has-been pop star named Alex Fletcher who sings songs like “Pop Goes My Heart.” In a film that constantly takes pains to remind the viewer that he is a has-been, Grant seems perilously close to embodying the joke as he wiggles his rear end on stage for drooling menopausal women.

Insofar as there is one, the story of Music and Lyrics concerns Fletcher’s attempt to regain his former fame by writing a pop song for a hot young singer, Cora Corman (Haley Bennett), who likes to writhe around on stage like Shakira. Fletcher can write melodies, but he needs a lyricist, and it just so happens that his plant-watering servant Sophie (Drew Barrymore) has a knack for rhyming as she waters.

I spent much of the movie mystified as to why Drew decided to be in this lame flick. She already embarrassed herself by starring opposite Adam Sandler in 50 First Dates in 2004, so perhaps Hugh Grant looked good in comparison, but there’s still the basic problem that her role has very little substance. In his apartment, Alex and Sophie develop a momentary rapport as they write a song called “A Way Back into Love.” Surprise (!) Cora likes the song and chooses it for her next mega-selling cd, but then Sophie turns out to have difficulties with her self-worth. When she was trying to make it as a fictional writer, her mentor and former lover Sloan Coates (Campbell Scott) wrote a best-seller that uses her identity without her permission. In the past, Sloan has called her a “vacant, empty, imitation of a writer,” which I thought was accurate, but Sophie cannot bring herself to curse the guy out, so Alex tries to help her confront him in a restaurant. Alex and Sloan get into a fight to the point where Alex has his head shoved into a dinner roll, but, as he says, it was a good thing that it wasn’t bread sticks, or they would’ve poked his eye out.

So, will Sophie find her self-esteem? Will Alex find his mojo again in the crass world of the contemporary music business? Would you like to watch Hugh Grant rotate his pelvis multiple times while singing fake pop songs in front of swooning middle-aged American women at an amusement park? Grant has the occasional witty line, such as his description of his performance before a fat farm as a “dietetic ,” but the film meanders from plot point to plot point without a whole lot of discernable chemistry between its leads, yet with much cheesy music. Aside from blond-bombshell Cora, who doesn’t mind being a commodity, most everyone in this film suffers from a lack of self-esteem brought on from age, over-eating, or writer-anxiety issues. Perhaps love and a concert performance of a feel-good song will save them all in the end. I think not.