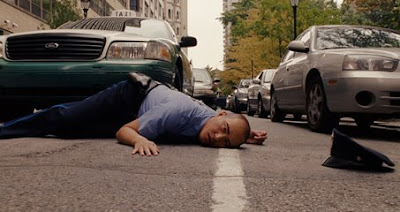 M. Night Shyamalan’s The Happening has not received the most favorable critical response, with Richard Corliss of Time wondering about the decline in the director’s talent, a current Rotten Tomatoes rating of 20%, and user comments like “The Happening is just not happening” on IMDB. While I can see problematic areas in the film, especially when Shyamalan tries to film computer-generated R-rated gore, The Happening struck me as thought-provoking and visionary. The director’s effort to return to a 1950’s style paranoid thriller in the same vein as The Invasion of the Body Snatchers has more contemporary relevance than yet another cumbersome superhero film.

At least, Shyamalan does not waste time with exposition. Two women sitting on a park bench in ’s note how people have stopped moving on the paths nearby. Then the scene cuts to some construction workers joking about the size of their members before a crash reveals that one of their colleagues just jumped to his death, then another, and another, until they look up to see multiple bodies falling in a visual echo of the people jumping from the World Trade Center. The scene cuts back to the women as one of them pulls a large pin from her hair and plunges it into her neck.

Pretty soon, the plague (?) spreads throughout the . Even though the characters love to speculate as to the cause of the problem (neurotoxins? a virus? a deadly gas? a terrorist weapon?), Shyamalan wisely never allows one to predominate, although authorities do list the three stages of affliction: “The first stage is loss of speech. The second stage is physical disorientation. The third stage is fatal.” The physical disorientation often takes the form of groups of people standing, or sometimes walking backwards, and the third stage involves people losing their basic drive to survive, so they look around for some quick way to commit suicide with whatever comes in handy—a policeman’s gun, a car, a lawn mower, or in one extreme case, a lion in a zoo. I liked the vision of mass crowds coming to a halt—modern life exposed as a sham of perpetual movement--but no one ever considers how it is that physical disorientation could lead to suicide. What’s the point of being disoriented if you need to move zombie-like to your annihilation?

Soon, Mark Wahlberg appears as high school science teacher Elliot Moore. An administrator tells him of the “terrorist attack” in , so Elliot cancels class, and decides to leave the city by train with his wife Alma (Zooey Deschanel), his math teaching colleague Julian (John Leguizamo) and Julian’s daughter Jess (Ashlyn Sanchez). Once on the train, everyone learns through their cell phones that the “attack” has spread to ’s . Then, abruptly, the train stops and gets rid of its passengers near the small town of , . When Elliot asked the conductors what’s going on, the answer “We’ve lost contact.” “With who?” “Everyone.” I like the way that the script gives Amtrak the opportunity to look unnecessarily villainous. So yes, perhaps everyone’s dead, is that any reason for the conductors to dump a bunch of passengers in Filbert? After the electricity goes out in the small restaurant, everyone decides to take off in their cars for the border. Still trying to find his own wife, Julian dumps his daughter Jess on Elliot and Alma. The emphasis on the little girl’s survival reminded me of Dakota Fanning in the similarly apocalyptic War of the Worlds (2005). Soon, Elliot, , and Jess find themselves walking across random fields and trying to find shelter from the plague as the bodies mount around them.

In terms of their acting, Wahlberg proves unexpectedly funny in his role. As he strives to apply scientific techniques to deduce a method for survival, he also makes fun of his wife’s not really adulterous relationship with some guy named Joey by confessing of his attraction to a cute pharmacist. He says he almost bought some cough syrup for her even though he didn’t have a cough. Wahlberg has several moments like this, such as when he bursts into song outside of a boarded up home, and something about the hysteria of the film liberates his acting in ways I’ve haven’t seen since his performance in The Departed. For her part, Zooey Deschanel’s striking blue eyes have always given her an extraterrestrial look since she appeared in Almost Famous (2000), so she seems well-cast, although she can look too disengaged to be properly fearful from scene to scene.

Ultimately, I liked The Happening because it considers how multiple circumstances can abruptly reduce human overpopulation. Whether on Easter Island with humans, or with micro-organisms in a Petri dish, populations often balloon in size before dying off when resources can no longer support them. While the basic concept of the film may be far-fetched, something will happen to cut down the exponential growth of the human population, and The Happening dramatizes how mentally ill-equipped we are for this inevitable change.