Safe in Your Space in the Factory of Blood: War of the Worlds (2005) 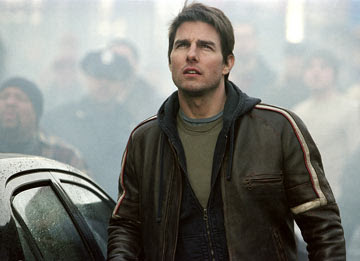 Ah, the pleasures of the apocalypse. People dying everywhere. No more of that dull everyday slogging to work, now the highways are clogged with wrecked vehicles and bewildered refugees and you must concentrate on surviving. Stephen Spielberg plays on both the fear and the excitement of this kind of scenario masterfully in War of the Worlds, and even though the film has major structural flaws and a fundamental B-movie sci-fi cheesiness, it kept me involved for most of its two hours length.

Most movies falter one way or another right from the start, and in this case, one has to forget the many tabloid images of Tom Cruise jumping around on a sofa on the Oprah Winfrey show, Tom proposing to Katie Holmes on the Eiffel Tower, and Tom feuding with Brooke Shields over anti-depressants in relation to his beloved Scientology. Tom risks suffering some kind of Ben Affleck-esque media over-saturation meltdown, and it was all I could do to grudgingly accept him as Ray Ferrier, a working class divorcee who takes in his two kids Robbie and Rachel in his little apartment while his pregnant former wife goes to for the weekend. Teenage Robbie (Justin Chatwin) just wants to listen to heavy metal on his iPod, while the younger Rachel (Dakota Fanning) channels the infant Drew Barrymore of “ET” only with more freaked out eyes. If we didn’t know aliens were about to move in, this kind of dysfunctional family melodrama, with Robbie in passive revolt against his dad, would be insufferable, but a storm blows away all of the sweet gold-filtered early scenes and Ray notes that lightning should not strike in the same place several times in a row, and the wind should not blow towards the storm.

Spielberg works best when he just allows images to retain their mystery. To give an example, apropos of nothing, Tom and his two children wait at a street corner to see a train completely engulfed in flames hurtle by at high speeds. In another scene, clothes fall from the sky with a graceful ominousness. The film succeeds best when we don’t know any more than the Ferriers do, and the irrational reactions of the freaked out people around them scare us more than the aliens. How about the absurdity of working at our jobs if we are going to be killed within fifteen seconds?

As spoiled Americans, we are so dependent on our cars, our electricity, and the inherent safety of our homes, I enjoy anticipating how poorly we would react to losing all of these things. What would we eat? Where would we go? Cruise, Chatwin, and Fanning all convey their hysteria and confusion well, and one could write at length at the way Spielberg draws directorial tricks from his previous movies with sound (the thumping noise in the distance), limited perspective (the view from a basement window), light shining down on people from alien spaceships above, and even the bloody slaughter-house atmosphere of Schindler’s List grinding up humans with grim regularity just out of sight.

Again, to discuss the flaws of the film would give too much away, but one wishes that Spielberg would drop the family drama in the midst of major disaster scenes. It seems a little silly to see the Ferrier father and son working out their issues as an entire army battles massive alien ships all around them in a fire-lit field. Suffice it to say that when things really get gnarly, expect Tim Robbins to show up in a dirty t-shirt, carrying a shotgun. In order to avoid making a three hour film, Spielberg compresses last-second massive plot developments into a singularly anti-climactic final ten minutes, but for the first hour and a half, War of the Worlds indisputably generates excitement, disorientation, and dread. Little Dakota Fanning spends much of the movie just wanting to feel safe in her space, but she conveys the mood of the movie best when, trapped in another dark basement, she asks: “Are we still alive?”

Labels: War of the Worlds