The tears of a counter-terrorist: Adam Sandler’s You Don’t Mess with the Zohan 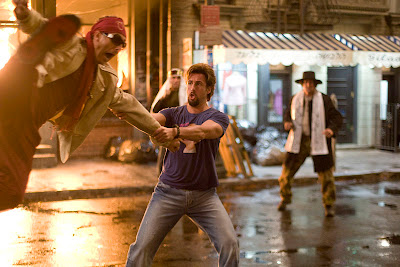 I’ve never understood the appeal of Adam Sandler. In his last movie I Now Pronounce You Chuck and Larry, Sandler explored the awkwardness of firefighters pretending to be gay, and now he’s gone ethnic with a film about hairstyling along the Israeli/Palestinian divide. In the beachside opening scene of You Don’t Mess with the Zohan, Sandler (Zohan) plays hacky sack, performs some impressive (?) computer-generated stunts, and then arranges to have the sack land in his rear, whereupon a swooning woman in a bikini applauds uproariously. Then, the scene cuts to Zohan grilling fish in the nude. The camera ogles his butt, and then, after skillfully throwing some cooked fish onto a bunch of plates, he then falls to the ground so that another fish lands in his derriere. Then a helicopter whisks him away so he can engage in some counter-terrorist activity as an Israeli commando. Quickly, we learn that a) in his early forties, Sandler developed his physique and his tan so he could look buff for the role, b) his character Zohan condescends to fight Arab terrorists, but, somewhat like the pacifist Ferdinand the bull, he would prefer to style hair in New York City, c) he likes to be the butt of jokes, and d) the film views as if it were absentmindedly written and performed by a bunch of hungover fraternity brothers.

Never one to construct a coherent scene, Sandler establishes that he can, in slacker fashion, take over a terrorist compound singlehandedly, kicking bad guys through walls, jumping through windows, and catching bullets with his nose, but again the computer-generated special effects make the stunts cartoonish and instantly forgettable. Zohan happens upon his nemesis the Phantom (a slumming John Turturro) walking along the ceiling of a church and shouting “No one can catch the Phantom!” After an extended chase scene, Zohan corners the Phantom out in the shallows of some lake. The Phantom shows off his machismo by allowing a piranha to chew on his neck, so Zohan drops the fish inside his codpiece-enhanced swimming trunks just to show that he too can endure pain. By the time a grenade goes off overhead, Zohan fakes his death so he can fly to in the dog compartment of a jet.

I understand that people may find Sandler endearing in his hang-dog schlemiel-way, but he keeps blending in other unlikely facets of his persona (notably, action figure and cocksman) so his fans can both identify with and laugh at him. He may cry in his bedroom because no one understands his dream of becoming a hair-dresser, but the film is clearly rigged to satisfy his every wish-fulfillment, leaving each scene inert and lacking in dramatic tension. Once in , Sandler transforms the Zohan into “Scrappy Coco,” a stonewashed jeans-wearing 80’s variation of Warren Beatty in Shampoo (1975). There’s one amusing sequence where he works extra hard to gain the trust of the formerly Palestinian Dalia (Emmanuelle Chriqui), who runs the Rafaela salon. Since she has no need for him as a stylist, she reluctantly agrees to let him sweep up after the other hair dressers, so he leaps out behind walls to vacuum every spare hair even before it hits the ground. Once he does get his first client, he turns shampooing an older woman into an erotic experience with much foam, lather, and rubbing his crotch on her shoulder, before sleeping with her in the next room. In this gigolo way, he earns a huge fan-base of older women across . For awhile, you can laugh at lustful older women, but later in the film, Zohan finds that he can only get aroused for Dalia, which physically proves his love for her. In the midst of various other misadventures involving the return of the Phantom, the ineffectual attacks of a small group of would-be Palestinian terrorists, and the machinations of an evil Trump-like developer, Dalia incomprehensibly proclaims her love for Zohan in spite of the fact the she knows he’s compulsively slept with a large assortment of women over 60.

By the end of You Don’t Mess with the Zohan, Sandler reaffirms the American ability to refashion one’s identity in the new land. Through a few more CGI-enhanced action scenes, he imposes racial accord and brotherhood in . Even with the best intentions, however, his brand of self-satisfied imbecilic humor still seems unlikely to bring lasting peace to the .

Labels: You Don't Mess with the Zohan

Pat R said…
Adam Sandler is classic in his own way, though he tends to do better when he isn't trying too hard to be funny or deep... his main area of expertise seems to be casual, unassuming comedies
July 2, 2008 at 2:21 PM