Get Smart and the decline of man 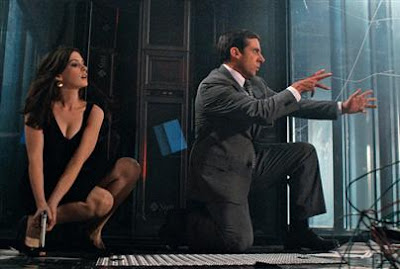 Essentially an nth degree rehash of Bond conventions in a story about a repressed bureaucrat, Get Smart joins The Avengers (1998) as another blockbuster violation of a decent TV show, in part because Steve Carell superimposes his 40-year-old virgin sweetness onto Maxwell Smart. As played by Don , Smart was a bumbler, but he played his role straight and never let on to his ineptitude, and so he had a kind of dignity. Carell’s version of Maxwell is enormously self-conscious in his bumbling, so he has none. The film suggests that he may be “smart,” but the jokes are so weak, his intelligence becomes a moot point. I guess I should have found the movie funny, as Roger Ebert did, but much of the time I was more disturbed by its climate of (especially) male insecurity and therapeutic psychobabble. Repeated jokes about neurotic eating progress to several fat jokes, one concerning Maxwell’s past as a fat man that haunts him (brief images of Carell in a fat suit falling around an obstacle course), and another long sequence when he pulls out a fat woman from a crowd of women at a formal ball in Russia, and then dances with her at length as Anne Hathaway and a handsome Russian look on. At the end of the scene, the fat woman flips off the (jealous?) other women spectators, so that makes laughing at her okay?

I was also bothered by the besmirching treatment of Hathaway. As her career would seem to benefit from The Devil Wears Prada and Becoming Jane, now she reaches blockbuster status, and what kind of dialogue does she get? At one point, as she’s maneuvering her way through an elaborate and deadly grid of lasers, she looks over at Maxwell and says “Are you looking at my butt?” Smart replies with “yes,” “no,” “yes.” In terms of the Darwinian face off between the sexes, the stark contrast between Maxwell and Agent 99 would suggest that men are no longer needed. We see other sad examples: Bill Murray inside of tree in a short scene, saying “Who wants to talk to a guy in a tree?” The Jaws-like villain, straight from Moonraker, looks menacing until Maxwell counsels him therapeutically about his life and his wife, in the middle of a fight scene on a roof at night. Eventually, all of Maxwell's talk works his magic on the “bad guy,” so he drops his big piece of machinery and gives Maxwell a hug for his words of wisdom. Lastly, and perhaps saddest of all, we get to see James Caan as the bumbling president making a 9/11 reference as he tries to read a storybook to some kids in a classroom. As he messes up in reading, one boy says “I think you suck as my teacher.”

Curiously, the one actor who seems exempt from the general emasculation is Dwayne Johnson, who plays Agent 23. It’s hard to say why, but I think it helps that he’s not in the film all that much, and his brand of cartoonish machismo has somehow been enhanced by Disney success and his surreal role in Southland Tales.

From its theft from The Man Who Knew Too Much to its weird reunion of Carell and Alan Arkin from the superior Little Miss Sunshine, Get Smart struck me as symptomatic of masculine derangement and decline. Somehow guys embody the joke too much for it to be all that funny.

The Film Doctor said…
I found the film too existentially dark in its implications to notice much humor in it.
June 23, 2008 at 4:52 PM