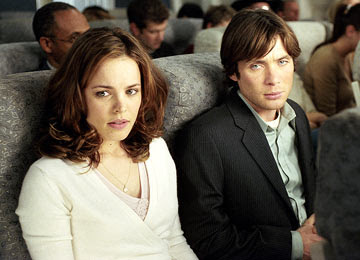 “Travel is hell these days,” says a sweet little lady in Wes Craven’s efficient horror/thriller Red-Eye, and we have no problem knowing what she means. Anyone who has had to wait in an airport line, suffer a cancelled flight, or cram oneself into coach late at night with a bunch of overbearing strangers can easily identify with the opening premise of this film. Ever since Speed, we have gotten used to movies where swiftness of plot substitutes for characterization, but somehow the well-edited Red-Eye moves fast and gets us caught up in its characters because they understand modern urgency. “Swiftly adapt or die,” the film seems to say—travel requires Darwinian survival skills.

Wasted as a rich fiancée in Wedding Crashers, the attractive Rachel McAdams plays Lisa Reisert, a hyper-efficient front desk manager of the Lux Atlantic, a resort hotel in . We first see her solving a hotel customer complaint on her cell phone while in a taxi enroute to the airport. Once she arrives, she bumps into Jackson Rippner (Cillian Murphy), a personable young man with striking blue eyes who appeared as a corrupt psychiatric administrator who uses drugs to drive people insane in Batman Begins. Jackson and Lisa find an easy rapport with one another as they negotiate their way past angry and frustrated middle-aged travelers. Someone spills a mocha down her blouse, but she changes into a white sweater, and for a moment as they flirt over nachos, we seem to enter romantic comedy territory. Once on the plane, Lisa again (surprise) finds herself sitting next to . No sooner do they take flight than he turns out to be what he has jokingly called himself all along—a killer who specializes in government overthrow, and she had better make the call he wants her to make or her father will get killed.

Fundamentally a horror director who learned with the Scream series the enormous satisfactions of pitting a strong, smart heroine against creative villains, Wes Craven slices and dices his genres in this film as he pleases. The film mixes together Airport and Diehard with a generous measure of Psycho, and one would never want to look for much depth in this concoction, but I found it surprisingly satisfying, in part because Murphy plays a smooth, likable villain in a celluloid world full of nerds. Moreover, Rachel McAdams’ Lisa brings the same problem-solving techniques she uses in her job to take on the terrorist plot to kill the new head of Homeland Security, and Jackson finds her endless resourcefulness exasperating. Locked within the close confines of a jet bathroom, or sitting too close to a villain in coach, she masters her grief and horror. Her quick thinking matches the film’s speed in keeping the audience’s expectations off balance.

Underlying all of this, Red-Eye plays with our fears since 9-11 of powerlessness in the face of the ease in which terrorists can turn our technology against ourselves. It also feeds on other simpler but no less aggravating frustrations, like how to deal with public rudeness or a cell phone battery going dead just when you need to make an important call. As Lisa’s Assistant Manager back at the hotel, Jayma Mays looks agreeably clueless as she takes on terrorists or, even worse, an irate couple who has a reservation denied them. While the latter half of the film dips a little obviously into horror movie conventions to resolve its plot strands, by then I didn’t mind because I liked being manipulated so well. The film is all about stress management and problem solving, and a knife-wielding killer chasing you through an airport seems like the logical extension of air rage.