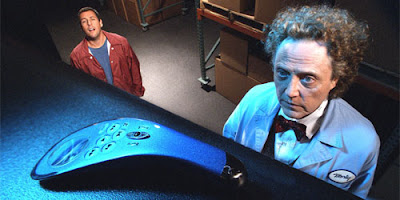 Adam Sandler starred in at least five movies that grossed over $100 million dollars each. On his website you can read comments like “He’s still a moron. That’s all that counts.” Sandler strikes me as one of the signs that men are in terminal decline. Somewhere between immense profits and his willingness to play an idiot, one can begin to understand the Sandler phenomenon. Around the time of Mr. Deeds (2002), I grew to hate his self-congratulatory and smarmy screen persona. Not only was the movie painfully awkward and unfunny, Wynona Ryder seemed to commit career suicide in that film, although thankfully, she has recovered some recently.

Adam has shown signs of wanting to mature in films like Spanglish. A water boy no longer, Sandler wants to figure out what he values as an adult, but Click tries to cover all of the bases by retaining his trademark sophomoric humor in a storyline that oddly resembles a cross between A Christmas Carol and Frank Capra’s It’s a Wonderful Life. In other words, Sandler now makes movies with heart, but his troops of fans can still enjoy poop jokes, fat suits worthy of Austin Powers, and the repeated sight of a dog that humps a stuffed duck in the living room.

As a film concept, Click is clever in the way that it foregrounds the importance of the media in shaping our lives. Frustrated with the conflicting demands between family and work, Michael Newman (Sandler) stumbles upon a universal remote, something that can control his world much like a DVD with lots of options. Since his job won’t allow him to sleep much, and he can never find the remote for his TV, Newman sets off in the middle of the night to a Bed, Bath, and Beyond store, where the “Beyond” sign in the store leads him down a mystical corridor to find Christopher Walken dressed in a mad scientist get-up. Like some otherworldly agent of Fate, Walken hands over a bright blue remote that allows Newman edit his reality. He can mute annoying people, fast-forward his way through his commute or fights with his wife Donna (Kate Beckinsale), or pause people like his boss (David Hasselhoff), so he can punch him in the face without getting caught. Newman even has a menu for his life where he can call up old scenes, change languages, or even enjoy a commentary with the voice supplied by James Earl Jones.

Naturally, Newman learns to enjoy skipping the dreary or hard-working parts of his life, but then a morality tale kicks in, and he finds himself increasingly missing the milestones of his life as he sacrifices family relationships for his career. We have seen something like this before in films such as Groundhog Day, where a slight wrinkle in one’s relationship to time can expose how much we waste our lives not appreciating what is important. In Bill Murray’s hands, this theme might have had some major resonance, but Sandler squats down to pass gas on his boss’s face, or he lowers the pants of “Speedo Torpedo,” a local swimming instructor, to embarrass him at a party. Consequently, the latter half of the film uneasily blends queasy physical humor with weepy remorse. Adam Sandler delivers his lines in his usual sleepy, dazed way, so he looks curiously inert amidst all the accelerations and jumps in time and space. Whatever pathos he meant to convey gets neutralized by the smirking expression on his face.

Still, in comparison to my disgust with other Sandler vehicles like 50 First Dates, I liked the premise to Click, if not the execution. We do treat our lives like spectator sports, and one wishes one could edit experience to just the fun parts, but in his urge to grow as an actor, Adam Sandler has his fan base dragging him down. He may attempt King Lear, but he will still need enough flatulence to make it saleable.

bd said…
You put your finger on something I think is becoming prevalent in Hollywood for the dumbed-down generations: The premise is interesting, but the execution sucks. More often than not, I literally fall asleep after I realize that I've already seen all the movie has to offer in the trailers. My wife tends to suffer through the tripe, and upon waking me, tell me that it was a waste of time. Hardly... with the new comfortable, reclining theater seats, it is almost worth $8 to get a good two-hour nap.

Click looks like a real snoozer. I haven't decided if I'll nap it in the theater, or wait for it to come out on Netflix and nap it on my own couch.

Sandler is indeed a mixed bag, but I really did enjoy him in Spanglish. Hated him on SNL.

Lastly: Did you actually verbify fourground? Close the gates dear romans, the Visigoths can't be far away.
June 9, 2008 at 10:56 AM

The Film Doctor said…
Sandler also redeemed himself some in "Punch-Drunk Love" and "Reign Over Me," but he still strikes me as one of the many signs of cultural decline--the many shows that flatter men for their smirking ineptitude.
June 9, 2008 at 11:37 AM