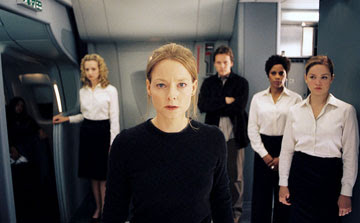 Jodie Foster’s overwrought Flight Plan begins on a cold dark winter’s night in . Propulsion engineer Kyle just lost her husband because he fell or jumped or was pushed off of something, so she must now transport his coffin to on a massive, two-story E474 Jumbo jet. An actress should start each scene with some restraint so that she can build on her emotion with rising intensity, but as is typical of this film, Jodie Foster looks completely freaked before she even leaves her apartment building. Her 8-year-old daughter, Julia, seems to know that she will get caught in some claustrophobic thriller plot complication, so she says “I don’t want to go out there” in the apartment lobby. They get on the plane, Kyle takes a nap, and naturally Julia disappears.

I like thrillers fine, but this film suffers from comparison both with an obscure early Alfred Hitchcock film that it steals from—The Lady Vanishes, and with the more recent Red-Eye. Made back in 1938, The Lady Vanishes concerns a young woman, Iris Henderson, who befriends a sweet old lady named Mrs. Kroy on a train who later turns out to be a spy. Some other spies kidnap the old lady, and when Iris sounds the alarm that someone is missing, everyone on the train doesn’t remember the old woman mostly because many of them are in on the kidnapping. Eventually, Iris starts to doubt her own sanity until she notices the ghostly imprint of the woman’s name, Kroy, written by hand on the train window. If you substitute the daughter for the older woman, Flight Plan borrows the first half of the plot almost exactly. While Hitchcock knew how to lighten up his film’s suspense with eccentric British characters and moments of humor, the German director of Flight Plan, Robert Schwentke seems overwhelmed by studio pressure. He’s frightened of modulating the film’s tone, so Foster moves from grief-stricken to paranoid, anxious, and angry over her daughter’s disappearance without relief. The film never allows itself a moment to breathe, and I got annoyed with all of its cheap editing and camera techniques to try to get the audience caught up in Kyle’s motherly fear. The second half of the film also has a disquieting resemblance to the latter half of Red-Eye, so anyone who has seen the previous film can spot the pretensions of Flight Plan. For whatever reason, movie plotlines tend to repeat. After September 11, screenwriters thought they would capitalize on fears of flying and the stereotyping of Arabs as kidnappers, but it does not help if you saw the idea better done.

Meanwhile, Jodie Foster, a talented actress and feminist action hero, storms up and down the Jumbo Jet in slow motion, raging against the exasperated crew, and fighting the air marshal, sleepy-eyed hunk Peter Sarsgaard. Kyle yells out things like “inaccurate passenger manifest,” turns off the lights, drops the air masks, and everyone gets annoyed with the delusional mother gone wacko. When it turns out that a funeral home director back in claims that her daughter died with her husband, the camera twirls around Kyle in her doubt and despair until she passes out.

If you like to feel tense, if you like sterile, cold, blue and black cinematography that emphasizes the indifference of technology, and if you like to see blue-eyed Jodie Foster contort herself into a human pretzel of anxiety, then you might like Flight Plan. I was hoping the daughter, Julia, would turn out to be an evil midget terrorist operating behind the scenes to hijack the jet for kicks, but no such luck.

Anonymous said…
Dr Starling move over - I found Jodie Foster's next movie Oscar-winning role! Dr. Jill Bolte Taylor who wrote ""My Stroke of Insight"" and delivered a talk about it on TED.com that will knock your socks off! The video's been seen 5 million times and I understand why.

Taylor was a Harvard trained brain scientist who suffered a massive stroke. I don't think we'll ever hear a story like this - Taylor understands how the brain functions and she was able to observe her mind deteriorating. She writes about the euphoric nirvana and a sense of complete peace and well-being she discovered in her stroke! She talks about this in her incredible (don't miss it) talk on TED.com. The book is great too - highly recommended. You'll learn how to 'step to the right of their left brain' to uncover a deep internal peace. Sign me up!
July 3, 2008 at 11:28 PM