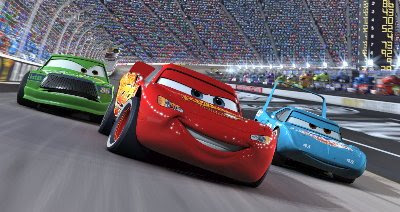 While Disney movies tend to ladle on the sentiment and patronize their young viewers, Pixar films (a subsidiary of Disney) are usually both visually and emotionally sharp. John Lasseter directed both Toy Story films, and through them he explored the disconnect between one’s inherited toy identity (Buzz Lightyear’s superhero status) and the inevitable diminishment that occurs when one realizes that one is merely a toy, and, even worse, when one’s owner loses interest and moves on. The films are a kind of meditation on the expiration date of the American dream, with the added benefit of crystalline computer graphics.

With Cars, Lasseter takes our omnipresent automobile culture and subtracts humans from it altogether, which suits the Pixar technology well because people often tend to look artificial when depicted in computerized animation. Even though its storyline drags slightly in the middle, Cars often moves like Toy Story on speed, and it keeps exhibiting unexpected depths, especially in its treatment of the decline of small town .

The film begins with a tease. We first hear Owen Wilson as Lightning McQueen say the word “speed” and the screen gives us glimpses of a car racing from different angles with long black-outs leaving us anticipating the race that we can hear but can’t see. Then without explanation the film plunges you into an alternate media-saturated world where cars in the stands watch car racing, RVs inhabit the infield, and car announcer Darrel Cartrip makes cracks like “Oh, my oil pressure is rising. If this gets any more exciting they’re going to tow me outta the booth!” Given that we are surrounded by cars every day, it doesn’t seem like much of a stretch to accept VW bugs as actual bugs, Model A’s enshrined as statues on town squares, and plump SUV’s in bad need of off-road military training. During a traffic court scene, the judge rises with the help of a hydraulic lift, and mere humans are no longer needed at all. Lasseter has created the ultimate Hot Wheels fantasyland.

In terms of story, arrogant red race car Lightning McQueen needs to learn humility after his disdain for visiting the pit stop forces two of his wheels to blow towards the end of a race, causing him to tie with two competitors. The Piston Cup officials determine that he needs to race again way off at the International Los Angeles Speedway, so his semi truck named Red/Peterbuilt (Joe Ranft) takes him on a long night’s drive west. Various misadventures later, Lightning finds himself alone and stranded in the small town of Radiator Springs in what looks like Monument Valley, Arizona, where he must find the value of friendship with a goofy old truck named Mater who has buck teeth and the voice of Larry the Cable Guy. For fun, Mater lures Lightning out to go tractor tipping in the dead of night. Each tractor acts oddly cow-like, so when Mater honks at them in their sleep, they tip over backwards helplessly until a big combine comes along to scare Mater and Lightning out of the field. As Lightning gets to know the locals, Lasseter explores how our current freeway culture has bypassed small town values in much the same way the many modern movies have dispensed with characterization in favor of set-piece action scenes.

Meanwhile, a slim light blue Porsche lawyer named Sally Carrera (Bonnie Hunt) teaches Lightning how to fall in love while cruising cinematically around waterfalls in slow motion. I found it funny when later Lightning finds himself day-dreaming of Sally (not to mention her pin-striping tattoo) in the climactic race. In an odd way, it makes sense that eroticism, car ads, and Porsches all mix together in the film’s subconscious.

After awhile, one notices that various models represent different generations and cultural differences. Paul Newman supplies the disgruntled voice of a former race star 1951 Hudson Hornet. There is a friendly rivalry between a hippie VW van and a military jeep, and various other characters slow down the first half of the film some as we get to know them, but in general I found Cars obsessively good right down to the mock references to Toy Car Story and Monster Cars, Inc. shown at a drive-in during the end credits.

bd said…
After seeing Cars, I commented that only Pixar/Disney could create an auto-personna like Sally Carrera that could elicit a salacious human response. Hubba... what a chunk of metal.

It was a great flick and one nice thing about these animations is that they give a nod to the old Warner Bros. cartoons with cultural jokes and references aimed at the adult audience. Formulaic? Sure, but these movies are Orville Redenbacher for the eyes.
July 1, 2008 at 8:13 AM

The Film Doctor said…
Truly. Although, now I wonder how the racing scenes in Cars would hold up after seeing Speed Racer.
July 1, 2008 at 8:16 AM