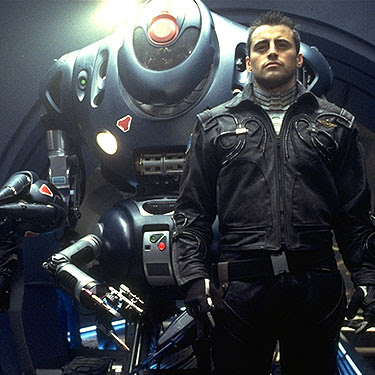 Soulless junk food for the eyes. The first sign of the apocalypse. Words fail me when trying to describe the shallow, frenetic, techno-sci-fi braindead torment of watching Lost in Space. I was numbed, dumbed, and increasingly exasperated. Would it be alright if I brought my Game Boy into the Cineplex? Lost in Space purports to be a summer moviezation of an old TV show that I just dimly remember. I haven’t watched enough Nick at Nite to catch up on my campy 1960s Star-Trek-meets- Brady-Bunch adventure serials, but I do remember wondering how the Robinson family always managed to end up on strange planets with breathable atmosphere.

Also there’s smarmy Dr. Smith and that nanny-like robot with the spastic arms flailing around. In the souped up movie version, we learn that the Robinsons must all go out on a space errand to find some water and breathable air for the Bladerunner-like earth of the future. In a world chiefly concerned with computer-generated special effects, fancy set designs, and explosively pointless plot complications, we vaguely get to know the Robinson family.

William Hurt embarrasses himself and his former acting career, looking a bit like James Cameron. He doesn’t pay enough attention to his son, Will (Jack Johnson) who turns to building time machines in a sulk. There’s a pubescent Winona Ryder-wannabe daughter, Penny, also sulky because she can’t shop in the mall lost in space. And there’s the evanescent Heather Graham playing the older daughter Judy, not to mention the studly Don West (Matt LeBlanc), the renegade pilot with a very broad chest who doubtless just failed to make the cut for Top Gun.

The whole gang gets in their Alien-style cryogenic pods and rise in the sky in what looks like a remarkably unaerodynamic silver Jiffy Pop container hatched from a retractable disco ball. Their spaceship is shaped like a Moon Pie warped by overexposure in the sun in the backseat of your car.

God forbid I should give the plot away, but rest assured there is a whole lot of plot. In fact, the filmmakers seem reluctant to leave you alone for a moment without some explosion, maniacal robot, or derivative alien to rampage around and threaten the poor Robinsons when they’re not busily talking through their 90’s dysfunctional relationships.

At times the old effects of the TV show (like the robot yelling “Danger Danger” or “Destroy the Robinsons” over and over) look comically incongruous within the fancy set design.

The bored viewer can count the thefts from other science fiction films or nod off during the theme park ride video game sequences. Don West keeps hitting on Judy Robinson, who retains her 1960’s TV show-era virtue. There are travel bubbles, exploding planets, videocamera watches, spider-aliens with lots of teeth, Exit signs on the side of the movie screen, and Indiglo lighting on my 1998 Timex watch telling me that this small eternity took 2 hours and 20 minutes to end.

You can spend your time asking questions. How did that robot with conveyor belt legs manage to climb up that cliff face? Why didn’t they go into hyperspace before plunging through the exploding planet? Why don’t they just freeze Dr. Smith like a popsicle in a cryogenic pod? Why don’t they just run out of fuel and slow suffocate and starve to death? No, that sensation is kindly left to the audience.

bd said…
I am surprised that you didn't pick more on the casting.

Joey Tribiani in a space suit? The horror of that image from the trailer was enough to keep me away from the movie.
June 27, 2008 at 11:31 AM

The Film Doctor said…
The film was bad on so many levels, I just felt sorry for the actors. William Hurt seems to be having more fun as the dastardly general in The Incredible Hulk. I wonder if he ever could have imagined himself playing such cartoonish parts back in the days of The Big Chill.
June 27, 2008 at 12:37 PM