The Aesthetics of Torture: the Uneasy Mixture of V for Vendetta 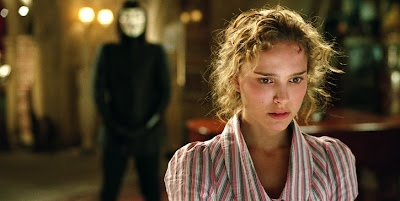 Adapted from a famous Alan Moore graphic novel, V for Vendetta has all the elements of a fun, subversive, intelligent movie—a future British fascist government with many parallels to our own, a highly literate villain/hero who cheerfully quotes Shakespeare while throwing knives at villains, Natalie Portman sporting a chic near-bald hair-do, and the Matrix-making Wachowski brothers behind it all, but somehow this ambitious film never jelled as it should have.

Sometime after 2015, the United States no longer exists, but Britain carries on underneath a red and black Orwellian totalitarian state ostensibly run by Chancellor Adam Sutler (John Hurt). Proclaiming slogans like “Strength through Unity,”and “Unity through Faith,” the government tortures anyone who spreads dissent, and its fear-mongering propaganda keeps its people obedient. One night in London, Natalie Portman’s character Evey Hammond runs up against the “yellow-coded curfew” that gets her in trouble with the FBI-like Fingermen. Just when they look ready to attack her, a Batman-like avenger named V (Hugo Weaving) shows up wearing Zorro duds, a Michael Jackson black wig, and a grinning Guy Fawkes mask. After dispatching the three Fingermen with ease, the talkative V invites Evey up to the roof of a building to witness his takeover of the city-wide sound system. He plays Tchaikovsky to wake everyone, and then he blows up the Old Bailey with a bunch of fireworks for extra visual flair.

Always maintaining the chivalric cool of his hero the Count of Monte Cristo, V then takes over the main government television station so that he can announce the revolution that will take place on Guy Fawkes day, November 5. V also starts killing off various people who tortured him a long time ago in a medical facility that resembles a cross between Abu Ghraib and Guantanamo Bay. Meanwhile, her association with V gets Evey Hammond in trouble with the Gestapo-like police who like to put hoods over people’s heads and steal them away in the night, so she has to hole up in V’s pad, the Shadow Gallery, where he keeps lots of books, paintings, and classic soul records in a jukebox. If V were Batman, then we would learn of his handsome dashing alternate identity, but here he keeps on his grinning mask throughout the film with Phantom of the Opera-like overtones. Try as Hugo Weaving can (formerly the agent Smith of the Matrix movies), it is hard to act with a mask on.

I found myself continually comparing this film to the original Matrix. Whereas the earlier classic found a way to blend Hong Kong action with a massive conspiracy undermining our notions of reality, V for Vendetta keeps getting bogged down with its message. The filmmakers had so many political axes to grind, they had a hard time dramatizing them all. So perhaps the government may have unleashed a virus that killed thousands of Britishers. Since it was a footnote in the complex storyline, it was hard for me to care. In an action film where one normally gets pumped up with the fight scenes, it’s difficult to sympathize with the perspective of someone getting tortured. That requires a level of empathy hard to attain in any case, let alone in a fast-paced commercial property. When later the film suggests that torture can have its good points in refining one’s soul, I balked at that altogether.

Looking winsome and smart, Natalie Portman acts well, but like the similarly youthful Orlando Bloom, she lacks backbone as a lead. Acting across from a man with a mask, she has to carry much of the emotional weight, and as much as Portman may cry in the rain, or rage against the fascists, I never really believed her drastic changes of heart later in the film.

Clearly, the Wachowski brothers want us to see the Bush administration in a sinister light, to connect the dots and fight oppression, but V’s strategy of fighting a government with terrorist tactics creates a moral ambiguity that I found muddled. Graphic novels can trivialize torture, as do films that congratulate themselves for their political awareness.
Labels: Natalie Portman science fiction V for Vendetta