Disneyfying Joyce: the Retro Future Design of Meet the Robinsons 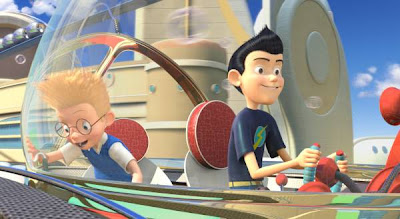 I’m not usually a fan of animated films designed for children. made me feel trapped in the theater. Flushed Away had its diverting moments, but the film was frenetic and over-crowded with plot, and all I really remember were the singing slugs. One gets bored with the predictable elements of these films like the cute talking animal sidekick, the winking popular culture references, and the derivative villains who laugh fiendishly.

In the case of Disney’s computer-generated feature Meet the Robinsons, you get Bowler Hat Guy, a tiresome bumbling villain with a long mustache who could easily battle Dudley Do-Right, but the film has some things going for it. Most importantly, the original inspiration came from William Joyce’s children’s book A Day with Wilbur Robinson. Joyce is an excellent illustrator of such works as The Leaf Men and Santa Calls. His playful yet exact oil pastel illustrations draw on unusual influences such as The Wizard of Oz, 1940s advertising art, the 1939 New York World’s Fair’s vision of the future, and the Futurism movement in Industrial Design of the 1930’s. A Day with Wilbur Robinson simply depicts a boy’s visit with a bizarre family, but the book likes to juxtapose deadpan language like “It’s kind of dull here today” with pictures of a giant locomotive steaming through the living room as a Robinson uncle shoots himself from a cannon. Dinosaurs hang around the pool because someone left the time machine on, and much of the plot concerns a boy’s search for some missing teeth. Since the book was optioned by Disney back in 1990, Joyce cranked out one screenplay after another as they considered a live action version, but finally CEO Michael Eisner green-lit the production of a computer-generated feature, wisely appointing William Joyce and John Lasseter (the director of films such as Cars and Toy Story) as Executive Producers.

The resulting film still displays the dangers of Disneyfying a good book. The plot has now grown to encompass the story of an orphaned boy-inventor named Lewis who just wants to join a family before he turns 13. On the day he’s ready to show off his first major invention, a memory machine, at the school science fair, the aforementioned villain causes the invention to break down in front of the judges. Then he steals it on a Radio Flyer red wagon. Despondent, Lewis returns to the roof of his orphanage to bemoan his failure, but fortunately a mysterious boy named Wilbur whisks him off on a time machine into a bright blue future.

Combining elements of Back to the Future, The Wizard of Oz, and The Jetsons, Disney summons up a whimsical retro-vision of a future where inventions have erased all pollution from the blue sky, commuters ride bubbles to work, and insta-buildings pop up like toast on the horizon. Once he manages to crash the time machine, Lewis encounters a Robinson family much like the one in the children’s book. He finds an octopus butler, a full-scale train in the living room, and a parent who likes to train frogs to sing Frank Sinatra songs. Basically, they are all adults who still retain the playfulness of childhood, and the movie just throws all of these eccentrics at the viewer so quickly that Lewis has to recap who they all are to Wilbur just so we can vaguely keep track of them.

Naturally, in Back to the Future fashion, time travel has the capacity to change the “space-time continuum.” Since he has already stolen one of the time machines from Robinson Industries, Bowler Hat Guy eventually fouls up the future by selling Lewis’s first invention to a large conglomerate back in his present day. His bowler hat is actually an evil robot that can fly around and speak in beeps and whistles like the R2D2 robot in Star Wars, and the film flirts with the possibility of a dystopic future of hat-tormented zombies in an over-industrialized wasteland.

Aside from the trumped up story, I still liked Meet the Robinsons for what it did not include: animal sidekicks, syrupy emotional scenes, or easy wish-fulfillment for its hero. While the film can resemble a positive reinforcement therapy session as the Robinson family cries out “What a special kid!” to Lewis even when he messes up, the movie still benefits from a sense of invention. Sitting at a desk, Lewis has to work for his success, drafting his invention plans on a school journal, and often throwing his unsuccessful ideas away. Let’s hope that the Disney corporation will learn from his example.