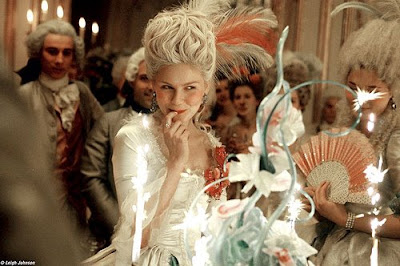 What’s a young princess to do in a big old palace on the outskirts of ? In Marie Antoinette, writer and director Sofia Coppola seeks to answer that question by bringing a punk rock sensibility to the fashionista set of 18th century France. Even before got started as a director, I have been a fan of her dad’s work. Francis Ford Coppola largely wrote and directed the Godfather series and Apocalypse Now. Sofia grew up playing around her dad’s sets (she appears as the baby getting baptized during the multiple shoot-outs of the climax of The Godfather), so instead of just remaining bored, useless, and rich, she jumped into directing by writing a screenplay for 1999’s The Virgin Suicides. With the success of Lost in Translation in 2003, Coppola established herself as an auteur who specializes in films about trapped rich girls.

While Lost in Translation was still a modest independent film, Marie Antoinette is the largest production Coppola has had to work with, and the strain shows. Part of the problem lies in the script. How does one condense Marie Antoinette’s life into a film without falling into period piece doldrums? Coppola solves that problem by beginning with Marie’s introduction into the court society of at age 14, and then emphasizing how she gradually learned to adjust to palace life. Her young husband/dauphine Louis XVI (Jason Schwartzman) is so inbred that he has difficulty doing anything with her in bed, so the more vivacious Marie (Kirsten Dunst) gradually turns to gambling, fashion, and wild parties to keep herself amused and sane in the midst of all the bizarre protocols of the French aristocracy. Coppola depicts the ludicrous nature of court rules when Marie awakes in her chamber. Once she’s up, she has to wait for various ladies to pay their respects before she even puts on her dressing gown. She says to the Comtesse de Noailles (Judy Davis), “This is ridiculous,” and the Comtesse replies with “No, this is .” Much of the film hinges on whether or not Louis XVI will ever develop the nerve to sleep with her, and in some ways Jason Schwartzman’s understated performance stands out the most. Basically, the prince is a complete dipweed, more interested in his lock collection and hunting than in Kirsten Dunst, but he knows well enough how to sit and eat sumptuous banquets and walk with a crown on his head once his grandfather, Louis XV (Rip Torn) dies.

To avoid any sense of a history lesson, Coppola spices up scenes with music from alternative bands like Gang of Four, Joy Division, and Siouxsie and the Banshees. When Marie decides to turn her frustration with her husband into a serious interest in high fashion and bouffant hair-dos, the soundtrack plays “I Want Candy” as she parties into the night. The opening scene of the film has Kirsten Dunst leaning back as her maid puts on some Manolo Blahnik pumps on her feet as she fingers one of the many chocolate cakes around her. She then winks at the camera, as if asking the audience “Wouldn’t you like to be queen?” For awhile, as Marie has an affair with a young Swedish soldier (Jamie Dornan), the answer is diverting enough, but the film ultimately overdoses on aesthetics at the expense of plot, and the storyline drags in the latter half. Marie figures out how to escape the palace by cultivating the lifestyle of a pseudo-peasant in her villa nearby. She takes care of chickens and milks the cow, but meanwhile the real starving peasants prepare to revolt.

The film has difficulty retaining narrative momentum until the revolutionaries overthrow the Bastille, and then things start to perk up again. As King Louis XVI looks befuddled at increasing roar of the mob in the distance, he and Marie again sit down to their extravagant dinner, but they’ve been living in a bubble for so long, they have no means to adapt. One can see parallels between the French government’s increasing debt and the situation in today, but Coppola never takes the storyline far into politics or the reign of terror. She keeps the movie light, frivolous, and visually sumptuous to the end. Marie Antoinette would approve.