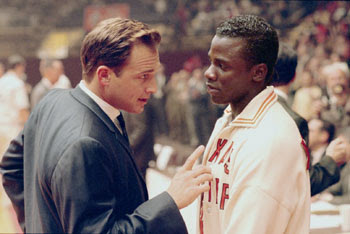 In 1966, a division 1 basketball team from the small came out of nowhere to win the National NCAA championship against the top-seeded . The final game gained historic status because their coach, Don Haskins, had an entire African American starting lineup for the first time against the all-white Kentucky team, turning the game into a kind of emancipation proclamation for black athletes still facing racist notions about their inability to “lead” or “hold up under pressure” in game play.
The Disney film chronicles this story, and while it seemed promising enough in the preview, I found the resulting film smugly self-congratulatory, bombastic, and generally annoying. Josh Lucas plays the Coach with the same blue-eyed good looks that he brought to the role of a pilot in Stealth. We first see him coaching a girl’s high school team, but then he gets the nod to coach for Texas Western in , so he moves into the guy’s dorm with his poor wife and kids. Without much of a budget, he quickly and unconventionally recruits seven African American players from places as far off as the Bronx and . He tells them things like “No girls, no booze, no late nights,” so they test his mettle by partying late at a Bodega club. In reply, Don Haskins forces them to run splits the entire next day. When one athlete does poorly at school, Haskins brings over his mother to make sure that he studies by sitting in class with him.
Unfortunately, the only thing to separate this film from The Bad News Bears or any other underdog win-one-for-the-Gipper movie is the race angle. The moviemakers make a stand against the various racists on the college board of trustees. Racists lurk in bathrooms or contemptuously pour their drinks on the African American athletes, but there’s no real dramatic tension in vilifying racists. Occasionally, one of the athletes will have problems with a heart condition or a forbidden Hispanic girlfriend or something, but they remain minimally characterized like everyone else. The coach’s wife played by Emily Deschanel has it the worst because she has to play the long-suffering woman who waits by the stove and says “Is all this worth it?” when she receives threatening racist letters as a result of the team’s growing success. Or she has to stand around cocktail parties and feel increasingly isolated as the 1960s socialites make stupid racist comments around her.
While the African American athletes try to liven up the film with their jokes and spirited acting, they too eventually succumb to the formulaic storyline, the newspaper montages, and the rapidly edited games. Eventually, as the team takes on national importance, coach Don Haskins decides that this is “more than just a game now,” and the film takes on a flag-waving righteous air that reminded me that the prolific Jerry Bruckheimer produced this film. Never one to display a light touch thematically, Bruckheimer has milked our sentiments before in such films as Top Gun, , Con Air, and countless others. Bruckheimer has already made once before in the form of Remember the Titans (2000). In that film, Denzel Washington plays a high school basketball coach hired to field a symbolic team of African American players just after schools were integrated.
Effectively, Bruckheimer recycles cookie-cutter feel-good stories for symbolic uplift, and the history of civil rights gets streamlined for Disney profit in the process. The best part of the film occurs during the end credits when the real players, now middle aged, speak of their struggle and the excitement of winning. Their voices have an integrity that the rest of never attains.
Labels: Glory Road