Irradiated Meat: the Pleasures of The Hills Have Eyes (2006) 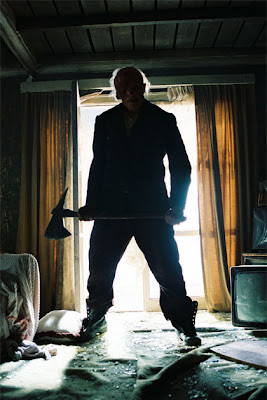 Now in his 60s, horror master Wes Craven could have signed over his soul to the B movie recycling mill, but somehow he hasn’t. His Red-Eye is still one of my favorites of his. The Scream series does the best job of entertainingly deconstructing the horror genre, and now in part thanks to the sophisticated directorial talents of French-born Alexandre Aja, the remake of The Hills Have Eyes has improved on the original dramatically.

In a ironic credit sequence reminiscent of Dr. Strangelove, the film opens with 1950s footage of a bland housewife proclaiming “My cake is ready” as 331 nuclear tests blow up the New Mexico desert. Since the military back then didn’t really understand what they were unleashing on the world, they would set off atomic bombs as soldiers watched nearby, or they irradiated pigs and “test villages” with human mannequins of happy families standing around their living room. Wes Craven also inserts some shots of deformed feet and inflated heads to get us ready for the local genetic damage of the bombings, and then he cheerfully plunges us into our current world as the Carter family travels to California in their truck and Airstream trailer.

We get to meet the Carters as they stop at a suspicious gas station in the middle of nowhere. The head of the family Bob (Ted Levine) is a tough Republican and a former detective. His wife Ethyl (Kathleen Quinlan) is a former hippie. They have a married daughter Lynne (Vinessa Shaw) back in the trailer with a baby, and her husband Doug (Aaron Stanford) resents hanging out with the in-laws on vacation. The Carters also include the young Bobby (Dan Byrd), who proves handy with the trailer’s air conditioning (a hint of future survival skills), and the sulky blonde teenager Brenda (Emilie de Ravin) who would much rather vacation in Cancun. This extended family has two German shepherds named Beauty and Beast. When one of the dogs sneaks into the gas station, Lynne almost stumbles upon a human ear and some teeth partially hidden inside a suitcase in the office, so the slightly rattled gas station owner recommends that they take a “shortcut” through the desert.

Soon enough, mysterious razors cropping up in the road force Mr. Carter to crash his truck into a rock, and the Carters must figure out a way to get help. I liked this film in part because of the way it shows how distracted and cocksure Americans can be in the face of nature. Initially, all Doug can think of is the lack of cell phone service. Young Brenda listens to her Ipod in her bra and carpenter pants as she sunbathes in the desert sun, not knowing that she is being observed by deformed weirdoes in the distance. The two men walk off for help in opposite directions, but as the sun sets, and as Bob does not return from the gas station 8 miles away, the family starts to realize something has gone very badly wrong, especially when Bobby discovers Beast up in the desert highlands with his entrails ripped open.

Oddly enough, I felt I understood the irradiated cannibalistic deformed miners who start to pick off the Carter family in a coordinated guerrilla campaign. One can’t blame them for resenting the US government for bombing their homes 50 years ago, and as in the case of Deliverance, the remnants of the Carter family have to snap to attention fast or die. The film shows off how to fight with a mining pick ax, what to do if you are trapped inside a large freezer with human body parts, and how to booby-trap your trailer to blow up intruders. Throughout the film, Wes Craven keeps returning to the opening imagery of the quintessential happy 1950s family in their suburban home, the kids sitting around the television. Something has gone very wrong with the American dream, the film suggests, and we need to beware. All of our civilized comforts have made us easy prey, a plentiful source of meat in the desert.

Labels: The Hills Have Eyes