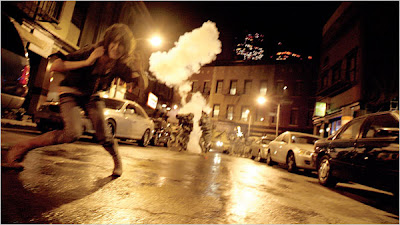 Cloverfield works best when it withholds information. When Transformers was released in July 2007, the film came with a mysterious preview of Cloverfield that depicted a surprise going away party in clumsily shot with some guy’s digital video camera. In the midst of the festivities, a large explosion goes off in the distance. There’s much screaming, and then the Statue of Liberty’s head falls onto their street. The trailer did not carry a title, and so everyone who watched the preview had to wait and wonder until last Friday to find out what the film is about.

The co-creator of the popular Lost and Alias TV series, producer J. J. Abrams brings an economical audacity to Cloverfield. The film has no known stars, but that helps with its plausibility. Instead of opening credits, an impersonal title appears on the screen telling us that the following video footage with the (seemingly random) codename Cloverfield is now owned by the government and it concerns an “area formerly known as .” Then, the film cuts to some playful handheld shots of a girl’s parents’ apartment overlooking Central Park where a young couple Rob (Michael Stahl-David) and Beth (Odette Yustman) are just now waking up and thinking about visiting Coney Island for the day. Then, the going-away party footage overlaps this initial video, so that we again meet Rob, the focus of the party, who plans on leaving for to work as vice president in some firm. Someone arbitrarily hands Hud Platt (T. J. Miller) the video camera, asking him to take testimonials of friends saying goodbye to Rob. Hud proves something of an unreliable goofball with a tendency to focus on unrelated young women such as the moody Marlena (Lizzy Capland) when he should keep the camera trained on the testimonials.

While most films do not call attention to the camera technique, Cloverfield invites the viewer to decipher each scene as it veers from Hud’s drunken gossipy interests to the national disaster that could spell the end of the world. In this respect, the film pretends to resemble the revelatory Rodney King beating footage or the Zapruder video of the Kennedy assassination as an important documentary artifact. Later when Rob asks Hud if he’s still filming, he replies “People are gonna want to know... how it all went down.”

After the initial explosion disrupts the party, Hud hides in a small market as something shatters the glass windows, and he and his friends suddenly must escape by foot. When the proves problematic, they return to a electronics store where looting allows Rob to find a battery for his cell phone. Breaking news footage on the monitors show something destroying downtown , in part by releasing weird large spiderlike creatures that click in the dark and bite. While most everyone else must evacuate the island under military escort, Rob decides that he must save Beth who is injured and trapped in the same apartment we saw at the beginning of the film. Hud, Lizzy, and Lily (Jessica Lucas) reluctantly join him as they head down in the subway system to escape the battle scenes and general carnage up above.

So, does the film feed off of apocalyptic 9/11 fears even as it lifts elements from Godzilla films? Yes, but not in any way that bothered me. I just wished that the film never showed any monster at all, and left the viewer guessing more to the end. Is the film quite scary and intense? Yes. Even with the shaky handheld camera, Cloverfield maintains a good sense of geography and characterization. Like The Blair Witch Project, Cloverfield succeeds because it feels real, leaving it up to the viewer to imagine the menace just off the edge of the frame. In the manner of Children of Men, it also immerses you in spontaneous violence without explanation. As Rob points out in an ironic testimonial later on: “My name is Robert Hawkins. Approximately seven hours ago some *thing* attacked the city. If you found this, if you're watching this, then you probably know more about it than I do.”