The charms of a gunslinger: 3:10 to Yuma and the return of the western 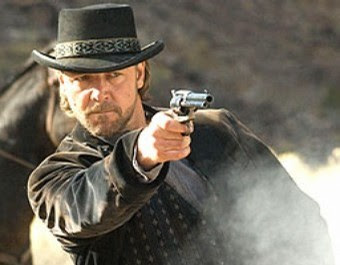 With so many movies featuring nerds, super heroes, and torture these days, it’s pleasant to watch a well-made western. Taken from an Elmore Leonard short story originally published in Dime Western magazine in 1953, 3:10 to has the old-fashioned virtues of a tightly focused plot, entertainingly cheerful villains, and the recalcitrant, slouching style of a gunslinger. After Ben Wade (Russell Crowe) and his gang rob the Southern Railroad’s stagecoach, Ben lingers in to sleep with a woman running a saloon. He likes to draw in his free time, so he sketches her backside afterwards, and leisurely walks downstairs to get ready to go. He encounters a local rancher Don Evans (Christian Bale) who contrives a way to stall Ben until the sheriff busts him for 22 robberies and untold murders in the area. The problem is, the railroad representative (Dallas Roberts) needs volunteers to escort Ben to the train station in Contention three days away. He eventually gets the local veterinarian and Don Evans to go for $200, but then Ben Wade has his gang try everything they can to free their leader. His right hand man, the cold, blue eyed Charlie Prince (Ben Foster) sports a confederate uniform jacket, and he’s delightfully dastardly. He burns a man trapped inside a stagecoach just for some information. When he encounters a vengeful posse trying to capture and torture Ben, he abruptly shoots them all, saying “I hate posses.” Charlie has the chilliness and poise of a snake, his only pleasure lies in killing, and he’s only loyal to Ben Wade.

At one time during the film’s preproduction, the producing/writing/directing team Cathy Konrad and James Mangold (makers of Walk the Line) considered casting Tom Cruise for the role of Ben Wade. Thankfully, Russell Crowe committed instead, and he obviously relishes playing the highly charming villain. Equal to all occasions, Wade looks on bemusedly as his gang robs the stage coach, some of them getting mowed down by a Gatlin gun. When one of his gang makes a mistake, Ben shoots him in the neck and then proclaims that “Tony was weak. Tony was stupid. Tony is dead” over a bottle of whiskey in case anyone minds. Reminiscent of Hannibal Lecter at times, Ben disorients his captors just by talking and observing what’s going on around him. He has the charm of a sociopath, reciting passages from the book of Proverbs, and justifying his murders as a form of divine retribution. As Christian Bale’s character Don awkwardly tries to stick to the “path of decency” for his measly $200, Ben decided long ago to not “mess around with doing anything good.” Why behave when he can enjoy grabbing what he can get so gracefully? Russell Crowe has done good work in films such as The Insider, Gladiator, and Cinderella Man, but his Australian nonchalance seems tailor-made for this film. He’s one of the few younger stars who can play an old-fashioned masculine lead in this age of pretty boyish actors.

In contrast to Crowe, Christian Bale’s character Evans has a drought-stricken ranch, a barn burned down in the opening scene, a leg shot off during the Civil War, and a fourteen year old son who doubts his dad’s manhood. Bale has the difficult job of making an ethical character appealing, and he does it by not looking like a star at all. With his pinched features and yellow teeth, he really looks like a down-on-his-heels rancher, so he complements Crowe’s cheerful mien well.

The director James Mangold relies too heavily on close-ups, but he draws excellent performances out of everyone, and the film builds to a satisfying showdown in Contention as Evans takes on an entire town of trigger-happy outlaws. Naturally, the climactic ride is late, so Ben Wade remarks “Damn trains. Never can rely on them, huh?” In contrast to most recently released films, one can rely on the easygoing artistry of 3:10 to .