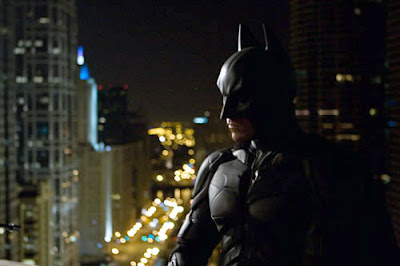 Back in the 1940s, working for DC comics, Bob Kane came up with the idea of Batman. Swiftly and economically, he sketched out Batman’s backstory within a few panels: as a child, Bruce Wayne witnesses his parents’ murder by some thug in the night streets of . Enraged and seeking justice, he grows up concocting his secret bat alter-ego persona in the bowels of the mansion with his trusty butler sidekick Alfred, and soon enough he’s out fighting crime. Simple enough, but now, many Batman movies later, with largely a dead horse, er, franchise to flog, Warner Brothers has inflated the importance of those first few comic panels to the level of hallowed scripture. In Batman Begins, we see young Bruce (Christian Bale) waking up in a Tibetan jail with Liam Neeson telling him that if he wants to seek true justice, he needs to pick a rare blue flower and climb a mountain. Young Bruce then discovers a Ninja school up amidst the frozen tundra with some bald warrior guy who looks like Yul Brynner (Ra’s Al-Ghul), and there Bruce learns how to swordfight from Liam Neeson in almost exactly the same way that Orlando Bloom did early on in Kingdom of Heaven, only now Neeson’s beard looks poofier. There are hints of Kung Fu mysticism and Hollywood-style therapy as confronts his feelings of guilt and anger over his parents’ death, and his fear of bats. Then, once he learns of their nefarious schemes to destroy , he sets the Ninja school on fire, saves Liam Neeson’s life, and returns home to fight crime.

If this earnest kind of thing sounds like your cup of tea, there is plenty of tea to drink. The movie clocks in at almost 2 and a half of hours of overly close-up murky fight scenes, loud metallic crunching noises, sets exploding into flames, computer-generated bats, Katie Holmes looking concerned as the assistant prosecutor, Christian Bale acting sullen, and lots of welcome celebrity cameos from the likes of Michael Caine, Morgan Freeman, and Gary Oldman (who seems to wear a red Groucho Marx mask as policeman Gordon). The neo-expressionist design is reminiscent of Metropolis with subways speeding high up in the air over to the big skyscraper. Michael Caine and Morgan Freeman try to inject small amounts of humanity into their scenes, yet the film is clumsily slow, solemn, and earnest about its material, and the largely humorless Christian Bale does not help matters. Director Christopher Nolan made the innovative Memento as a maverick young independent, but now I can only imagine the studio pressures he worked under with this project. About half way into the movie, the plot seems to start all over again with various bad guys plotting to drive all of crazy with CGI horror movie visions by training a microwave emitter on the city’s water supply that has been dosed with a hallucinogenic drug. Checking my watch, I kept gasping at the late-inning plot complications. Is this a movie or a mini-series?

The film has some pleasures in the way the Batman fan can see things coming. Bruce Wayne stumbles across a batcave under his mansion and returns to install a crude freight elevator system. Later, the fledgling Batman has to experiment for awhile with his batgear, and at first he has difficulty jumping around the city buildings at night. The new Batmobile looks more abstractly militaristic, like a cross between a stealth bomber and a tank, and Batman pilots it over a series of rooftops under helicopter searchlights as he shows flamboyant disregard for the cops getting in car wrecks. I also liked the occasional calm moment when Batman would stand and brood over the skyline like a large gargoyle.

But the moments of calm don’t last long. Batman has to save the drugged Katie Holmes from Uzi-wielding bad guys and a SWAT team by calling in a bunch of computer-generated back-up bats before the final chase/fight scene on an out-on-control subway train takes an enormously long time to crash through a high-rise parking lot with a lot of tearing metal and grandiose explosions. With all the thuds and bangs, I could sense a studio endlessly beating a good idea into the ground.