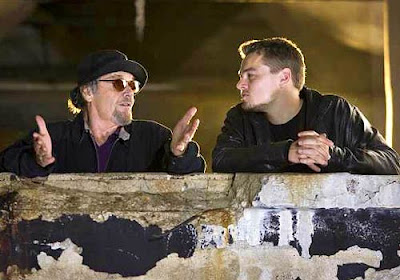 Martin Scorsese, the director of The Departed, is a small, over-caffeinated fellow from who has been making excellent movies since 1973’s Mean Streets. While he has tried period films, dark comedies, and the occasional Michael Jackson video, his specialty lies in gangster films, specifically those like Good Fellas which celebrate the impulsive world of the mafia. Hoods can act on their aggressive instincts in ways that ordinary men can’t, and Scorsese revels in their unpredictability, entitlement, and sense of freedom. There’s a famous long tracking shot in Good Fellas where Ray Liotta visits a restaurant through the kitchen, and everywhere he and his date go, everyone wants to please him. They give him the best seat in the house, and he understandably spends much of the film wondering why ordinary Americans put up with dreary law-abiding humiliation. Gangsters can live the high life of their fantasies, and for awhile at least, they can brutalize whomever they want without consequences. It’s not ethical, exactly, but it makes for fun, edgy cinema, and Scorsese brings an encyclopedic knowledge of film technique to his craft. While other major 1970s directors, such as Francis Ford Coppola, have largely retired, Scorsese keeps cranking out superlative films, and scenes in The Departed play like a command performance of the greatest hits of his career.

This time Scorsese takes on the Irish mafia in and its cat and mouse games with an elite investigative unit in the state police. Adapted from the screenplay of a prominent film titled Infernal Affairs, The Departed juxtaposes two rats or moles who cross between the police and the criminals. On the one hand, Leonardo DiCaprio plays Billy Costigan, an undercover policeman who has infiltrated the Irish mafia run with bone-crushing glee by Frank Costello (Jack Nicholson). And working as Colin Sullivan, a detective in the state police, Matt Damon sneaks out reports to Costello so that he can stay ahead of the cops. Everyone shares in the same corruption. Early on, Costello says “You could become cops or criminals—when you’re facing a loaded gun, what’s the difference?” And everywhere in this film, you keep running into major male stars--notably Mark Wahlberg, Martin Sheen, and Alec Baldwin--who all seem to enjoy the competitive atmosphere of keeping up with Jack Nicholson, who bites into his role with a relish I haven’t seen since 1980’s The Shining. His Costello operates under the credo that “No one gives it to you. You have to take it,” and his devil-may-care attitude acknowledges that he may be killed at any minute, so why not live it up? We see Costello take two models to the opera before guiding them to a large bowl full of cocaine, where he says “Inhale until you’re numb.” In recent years, Nicholson has blanded out in such films as Something’s Gotta Give and As Good As It Gets. It’s nice to see him taking pleasure in his demonic grin and improvisational fooling. DiCaprio claims that he didn’t know what Nicholson would do next on the set (Break his hand? Pistol whip him?), and the fear and uncertainty in his eyes is all the more convincing as a result.

In terms of story, the film moves quickly into the dangerous terrain of an undercover operator trying to maintain his position in the firm when the leader knows there is a rat in his midst. Playing against the charmer’s role he finessed in The Titanic, DiCaprio ties his face up in knots as he has to help his underworld cronies kill other gangsters, blow up cars, and burn down buildings, let alone evade Costello’s suspicions about his loyalty. Matt Damon has no problem playing the smarmy detective in his suit, forced at times to send out text messages on his cell phone in his coat pocket to Costello so that he can carry on a smuggling deal without getting caught in a sting operation. As the two rats circle ever closer to discovering each other’s identity, the violence increases with the Darwinian ferocity of cinema.

I could spend paragraphs attempting to unpack all of the subtleties of the movie and still not fully understand it, but it wouldn’t matter. The Departed is one of the best, most freewheeling of Scorsese's films, one that challenges the viewer to keep up even as it entertains throughout. At one point, the cop psychiatrist/girlfriend Vera Farmiga says to Billy that he’s a textbook case of “drug-seeking behavior.” Scorsese directs the film as if he is high on the gangster tradition, and his pleasure in every frame shows.

Sellino Films said…
Film student at New York University here, and agree with all points made about Scorsese. But the line "small, over-caffeinated fellow" has me in stitches. Kudos on one of the better articles about this superb director. We're reading you up here. Great writing on the art of cinema. Now do one on De Palma.
January 19, 2011 at 4:04 PM

The Film Doctor said…
Thanks, Heather.