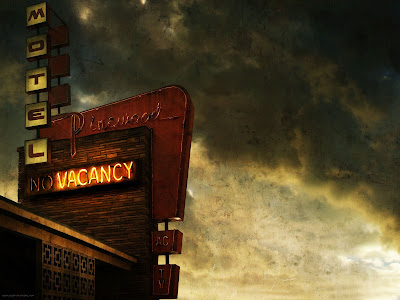 In 1960, director Alfred Hitchcock deliberately turned away from the big budget production techniques of North by Northwest to make a small cheap film about a woman visiting a hotel. The result was Psycho, perhaps his most enduring masterpiece, and it shows that you don’t need lots of bravura large-scale sets, an international cast of stars, and lots of special effects (such as what will descend on the movie viewer in the upcoming blockbuster summer). Sometimes a deliberately modest film can be more enjoyable and effective because it can concentrate on what films do well—lead the viewer to identify with a character, and then put him or her into an entertainingly dangerous situation.

Hitchcock directly influenced the storyline of Disturbia, which lifts liberally from Rear Window. Now, with Vacancy, Hungarian director Nimrod Antal lightly borrows some elements of Psycho. Instead of Janet Leigh stealing $40,000 from her employer and lighting out for her boyfriend in California, “Vacancy” begins with a couple with California plates getting off the main highway and getting lost in the mountains. Kate Beckinsale plays Amy Fox, an amusingly sulky and passive aggressive woman who is endlessly irritated by her soon-to-be-divorced husband David (Luke Wilson). When David almost runs off the road because of a raccoon, Amy remonstrates and fusses at him at length. After letting a dubious-looking mechanic fix, or perhaps further mess up their car, David curses as their vehicle dies two miles away from a decrepit Pinewood motel. When the couple finds that they can’t get a mechanic in the middle of the night, they reluctantly get a room from a creep hotel manager (Frank Whaley) who has cheap glasses, a sickly grin, and a penchant for watching horror films.

Much of the pleasure of Vacancy lies in the grungy details of its set design. Their “honeymoon suite” is nasty, with lots of dusty browns and greens, a large cockroach in the bathroom, brownish liquid coming out of the tap, a nailed-shut back window, and sheets that make Amy decide to sleep in her clothes. They no sooner try to rest when someone starts banging on the door connecting their room to the next, which is weird because, as the manager points out, they are the only guests in the motel. David pitches a fit to no avail, but then after the sound dies down, he notices that the videos in his room all show people getting attacked and killed. The problem is, the snuff film video action takes place in the very same room that they are in, and they need to think of a way of surviving the evening before various men wearing green masks break in.

One could dismiss Vacancy as just another horror film with a Videodrome fixation on our sick fascination with violent images, but the movie does have its good points. For one thing, the plot does not descend into the usual torture-porn tactics of Hostel or Saw. We do not see people getting tortured for the fun of watching them suffer. Instead, the film just hints at the violence to ratchet up the suspense. Secondly, Vacancy effectively second-guesses the viewer about what will happen next, especially because David shows unexpected skill in thinking up techniques for surviving. Also, I liked the casting because both of the stars play against their usual type. I’ve never seen Luke Wilson in the kind of action role where he has to think fast and act efficiently or die. He usually plays nice guy characters in dramas or comedies. Moreover, I am used to Kate Beckinsale playing an impassive leather-clad vampire warrior in the Underworld series. In this film, she moves from sulky-spoiled to scared-hysterical and beyond with frightening plausibility.

So, as the summer goes on with all of the blockbuster wanna-bes straining to give you so many thrills per minute, remember the dramatic effectiveness of one couple’s fear in a grungy motel.
Labels: horror Vacancy