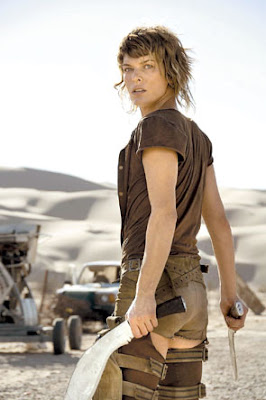 Given the nature of population overshoot and collapse, it’s not hard to imagine an immediate future where a virus has wiped out most of humanity, leaving the world a desert wasteland where small bands of people struggle to survive without much gas or water or food. The third in a trilogy of successful films based on a video game and written by Paul W. S. Anderson, Resident Evil: Extinction adds thousands of zombies and b-movie violence to the scenario, but I’ve always had a weakness for Mad Max-type post-apocalyptic films. Much like Mel Gibson’s Road Warrior only with lamer dialogue, Extinction depicts a world where people barely survive hand to mouth, but you still get to see all of the detritus of our vanished civilization lingering on, one big dump yard of skillfully lit junk.

As the biogenetically-enhanced , Milla Jovovich visits a gas station cautiously. First, she stops to check out the terrain through binoculars. Spotting a zombie, she kills him with an arrow from a crossbow, pinning his head against the side of the garage. Then she tentatively enters the building where a display promotes chili and cheese amidst the general carnage. She soon finds a body blackened by advanced rot hanging from a ceiling and surrounded by flies, but she also discovers a journal that mentions the possibility of a promised land without infection or the undead in . Due to the special powers given to her from the Umbrella Corporation, she has decided that she’s best off alone much of the time, but she can’t help temporarily joining a caravan of surprisingly young and photogenic explorers just trying to get through the day without encountering a hungry zombie couple in an abandoned hotel room.

Overall, Extinction is not very subtle. Much of the plot provides an excuse for to massacre zombies in extravagant ways. The zombies themselves lack the high-speed finesse of those found in the superior 28 Weeks series. Still, I found it delightful that even on an earth as barren as this one, one corporation still finds the time to be evil. Comprised of various men annoyed with “rotting” in a great underground bunker, the Umbrella corporate CEOs keep growing clones and subjecting them to various lethal chambers with laser grids that cut them up into little segments, or gigantic blades that slice up from the floor. ’s clones haven’t proven as smart as the original, so they keep getting killed. Then the corporation dumps the clone bodies in a big ditch in a compound surrounded by hundreds of computer-generated zombies stumbling about. Naturally, the real wants revenge for this rude treatment of her gene pool, not to mention the fact that the Corporation started this whole apocalyptic T-virus mess that turned most humans into zombies, so she seeks out the smooth-talking Dr. Isaacs (Iain Glen) and his zombie treatment lab underground.

Most importantly, Extinction supplies the viewer with state-of-the-art post-apocalyptic fashion tips. Sporting clothes from her designer label, Jovovich wears long horsemen duster coats like the ones you can purchase in J. Peterman’s catalog, cowboys boots that lace up, and various holsters on her gartered thighs giving a French twist to Lara Croft’s look in the Tomb Raider films. In the midst of fighting zombies, sometimes shoots pistols. At other times, she wields two curved knives for a quick double-beheading, and she has telepathic powers that can send villains flying into the air. She can also take on red-veined zombie dogs and a huge flock of stoned-looking zombie crows in a scene that tips its hat to Hitchcock’s The Birds. Most of all, Alice always manages to look like a spotless supermodel no matter how many days she has to sleep or fight in the wild, even down to the hint of lip gloss in the desert heat. If I were a flesh-eating zombie, I would definitely stay out of her way.