Too Much Flourishing of the Wand: Harry Potter and the Order of the Phoenix (2007) 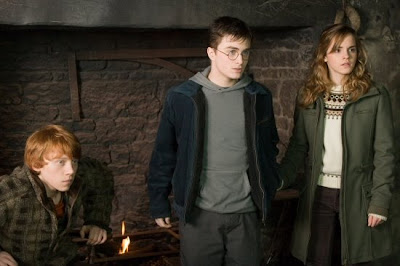 Welcome to magical Hogwash, I mean Hogwarts. With due respect for J. K. Rowling and her series of beloved books, I found the newest installment of the Potter film series crowded, repetitive, and confusing, with occasional hints of British wit and some excellent acting.

Having defeated the ultra-evil Voldemort (snake-like Ralph Fiennes without a nose) in the last movie, Harry should be able to loosen his tie a bit, fly an Orc around or something, but no. The Order of the keeps emphasizing its “dark” grim world of adolescent wizard angst as if to make up for its flimsy magical wish-fulfillment of the series’ basic premise, so the cinematography darkens and the teens tend to look glum. The film begins with a lonesome Harry tormented by Muggle punks in the playground during one of his endless summers with the Dursleys—his stupid adopted family back in dull realistic . Forced to save the life of Dudley Dursley from an attack of cadaverous Dementors by chanting a Patronus charm, Harry finds himself suspended from Hogwarts which leads to his trial in the Kafkaesque Ministry of Magic.

In this world of corrupt authority, puritanical judging, and paranoid administrators, the one newspaper The Daily Prophet seeks to undermine Harry’s achievements by distorting the story of his fight with Voldemort and casting suspicion as to what exactly happened in regard to the death of Cedric Diggery in the last movie. So, when Harry arrives back in Hogwarts, people suspect him of all kinds of skullduggery. Also, the kindly Dumbledore, a sort of cuddly Merlin amongst the bearded headmaster set, has his authority usurped by the delightful Dolores Umbridge (Imelda Staunton) of the Ministry. Looking like a cross between Queen Elizabeth II and Laura Bush on a power trip, Dolores gradually takes control of Hogwarts by issuing decrees, enforcing new draconian rules, and creating a world of paranoia and narcing. When Harry tries to stand up to her and her watered down curriculum, she orders him into her office lined with meowing kittens on plates. Then she forces him to write “I must not tell lies” with a special quill, the words simultaneously cut into his hand. Ms. Umbridge is fun because she smiles and looks so chirpy and frumpy in her ruthless quest for power.

For awhile, the film develops some momentum as Harry, Hermione, and Ron rebel by forming a “Dumbledore Army” that trains in a secret Hogwarts room, but meanwhile visions torment Harry due to his mysterious spiritual relationship with Voldemort. As much as he might want to pursue a relationship with Cho Chang or maybe with the blond flakey Luna Lovegood, Harry hears that “Voldemort is on the move,” as someone says, and so he must prepare for the last big special effects-driven showdown with his arch-nemesis. With his shorter haircut and leaner features, Harry is nothing if not tormented. At one point, when talking to his father-substitute Sirius (Gary Oldman), he says that “I feel angry all of the time. What if I’ve become bad?” At another point, he gets painful magical brain therapy sessions with my favorite instructor Severus Snape (Alan Rickman) who seems to look upon the entire world of Hogwarts with a mixture of boredom and disdain.

As much as the movie tried to get me to care about Harry’s angst, I just couldn’t, nor could I really believe in its windy, watery, broken glass-splattering, light-show wand battles. For teenagers, the film caters to their wishes for approval and achievement, their hatred of schoolyard taunts, their defiance of authority, and their search for love and friendship. Whenever a mythological creature shows up (like a giant, or some centaurs), you can bet it will come in handy during the climax. For those well-versed in the books, these movies are increasingly like class reunions, where you welcome back old friends. But they can also resemble overcrowded witch/wizard conventions where the only character that has any screen time to develop is dear old Harry.

Labels: Harry Potter and the Order of the Phoenix