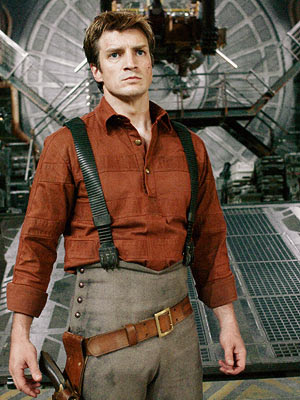 Thrown into the usual hobo stew of dismal September releases, without any major stars, and based on a failed TV show Firefly, Serenity only has the association with Buffy the Vampire Slayer to recommend it, since Joss Whedon, who wrote and directed this film, was behind both Buffy and Angel. Now that both the basic plotlines of the Star Trek and Star Wars have been exhausted and recycled ad nauseam, why would anyone want to see yet another scruffy band of wise-cracking space cowboys fight their way through another asteroid field?

Still, if the movie is well-made, why not? Sometimes failed TV shows can provide nicely complex frameworks to build a movie around, and Joss Whedon understands along with George Lucas that it can be fun to tag along with a bunch of gun-wielding ruffians on a fast spaceship. In Serenity, 500 years in the future, humans have been terra-forming planets in a new solar system to adapt to over-population back on earth. Loosely in charge of all this, the Alliance is a large, evil conglomerate government that likes to mess with young telepathic psychics by brainwashing them and implanting weird skills and memories into their brains. In a scene reminiscent of the old political thriller The Manchurian Candidate and The Matrix, teenage River seems to attend a serene class outdoors, but then the scene abruptly cuts to her asleep inside of a dark laboratory being fed these experiences through electrodes. Her doctor brother Simon Tam helps her break out of the lab by escaping on the cowboy spaceship. In response, the Alliance sends a deliciously sophisticated and intelligent “Operative” (Chiwetel Ejiofor) after the brother-sister team to kill them both. Frustrated in his search, he starts to kill everyone even remotely associated with them, wiping out whole planetary settlements.

Meanwhile, on the transport spaceship where Simon and River hide out, Nathan Fillion plays Mal Reynolds, the captain with more than a hint of Hans Solo attitude. He and his inter-racial loyal crew like to visit planets to rob them. They also have to contend with Reavers--zombiefied space-age psycho motorcycle-gang punks who like to smear dead bodies over their spaceships and generally kill and eat anyone they can find. Once River and Simon join the cowboy gang, Mal insists that River join them on their robbing sprees so she can use her telepathic powers to tell them if, for instance, someone lying on the bank floor may pull a gun on them, or if the Reavers are after them. I found River delightful because, with long dark curly hair, and bugged out Christina Ricci eyes, she spends much of the movie looking spooked and blank. While the cowboy space team visits dangerous planets in their protective gear, River usually walks around barefoot. She is a kind of antenna picking up remote signals out of the corner of her eye, but Mal doesn’t know she has also been trained by the Alliance to be a weapon. So, down in an interplanetary bar that reminded me of the ersatz Hong Kong set design of Blade Runner, River stares at Japanese animated ads that subliminally tell her to suddenly start kung fu killing everyone in sight.

So, is the film perfect? No. Its computer-generated graphics are not quite as good as those found in Star Wars: Revenge of the Sith, but the writing and acting are often superior. Is the film a fun ride? Yes. Does Joss Whedon understand the basic appeal of a single young woman using martial arts to take on whole squadrons of cannibalistic zombies? Yes again. Sometimes turning your cancelled TV show into a hit film is the best revenge.
Labels: science fiction Serenity

This was the main attraction for me.

I thought it felt a little like a TV Show, not really fully bursting out visually or in terms of scale. A good film, I agree, but a rung or two below Revenge of the Sith and the Star Wars saga.
February 16, 2010 at 7:11 AM